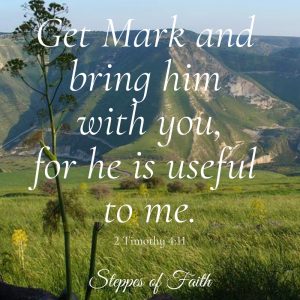 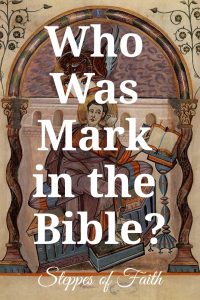 As I was studying the gospels recently (Matthew, Mark, Luke, and John), my son asked me who Mark was. Was he a disciple of Jesus? It’s one of those questions where you know the answer, but you never really thought about it. I knew who Matthew, John, and Luke were, but then I had to admit that I had no idea who Mark was.

That kind of mystery makes me insanely curious. And, of course, the more you study the Bible, the more it reveals things you never had any earthly idea about. Such is the case with Mark. There is more to his story than you expect, and his writings are much more than you can imagine.

Though the book named after him comes early in the New Testament, Mark is only specifically mentioned in the book of Acts. He is a recurring character who often sat in Paul’s shadow, so don’t feel embarrassed if you know next to nothing about him.

The first mention of Mark is in Acts 12 after Peter is miraculously released from King Herod’s prison by an angel. Verse twelve says he “came to the house of Mary, the mother of John whose surname was Mark, where many were gathered together praying.”

Mark is a surname, a last name. So, his real name is John Mark. This fact is mentioned a few verses later in Acts 12:25 and again in chapter fifteen of Acts.

Colossians gives us another clue about who Mark was. Colossians 4:10 tells us he was Barnabas’s cousin, the same Barnabas who accompanied Paul on his first missionary journey (Acts 12). 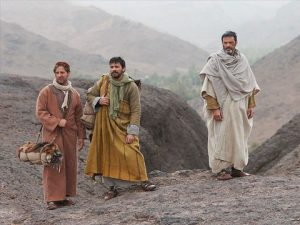 Evidently, Mark was tagging along with his cousin on this first journey to share the good news about Jesus Christ, but he abandoned them after they left Pamphylia to go back to Jerusalem.

The Bible doesn’t explain why Mark left, but some scholars believe Mark’s sudden departure was because of his young age. They suspect his lack of spiritual maturity prevented him from being fully involved in the mission, especially after less than expected success in Cyprus (Acts 13:4-12). It’s speculated Mark may not have realized how difficult mission work can be, so he returned home.

Sometime later, Paul was ready for a second missionary journey. He wanted to go back to every city they had visited to see how the brethren were doing. Barnabas wanted to bring Mark again, but Paul refused. He was still upset about Mark leaving them high and dry. That didn’t sit well with Barnabas.

“Then the contention became so sharp that they departed from one another. And so Barnabas took Mark and sailed to Cyprus, but Paul chose Silas and departed…and he went through Syria and Cilicia strengthening the churches.” Acts 15:39-41

John Mark continued to grow and mature, and eventually, he was able to reconcile with Paul. The Bible doesn’t explain how they did it, but we know Paul found favor with Mark again because he refers to Mark in friendlier tones later in the New Testament.

“Aristarchus, my fellow prisoner, greets you with Mark, the cousin of Barnabas (about whom you received instructions: if he comes to you, welcome him).” Colossians 4:10

“Epaphras, my fellow prisoner in Christ Jesus, greets you as do Mark, Aristarchus, Demas, Luke, my fellow laborers.” Philemon 24

After Paul’s helpers went to Galatia and Dalmatia leaving only Luke (from the book of Luke) left with him, Paul tells Timothy in 2 Timothy 4:11 to “Get Mark and bring him with you, for he is useful to me for ministry.”

Whatever Mark did, apparently Paul decided he wasn’t a bad guy after all.

Peter mentored Mark for many years.

Mark’s growth in ministry may have been due to his relationship with the apostle Peter. As you know, Peter was rather familiar with feelings of failure and issues with maturity, so it only makes sense that he took Mark under his wing and mentored him as Mark grew in ministry.

Their relationship was so close that some people have said the book of Mark is more akin to Peter’s memoirs. Mark had written down everything he heard Peter say, particularly when they were in Rome. This lines up with the early traditional belief that the book of Mark was written in Rome for the benefit of Roman Christians.

Irenaeus in A.D. 185 called Mark “the interpreter of Peter,” and Papias, bishop of Hieropolis, called him both “a disciple and interpreter of Peter” in A.D. 140. Mark had attempted to record every word Peter preached about Christ, but it’s not known if he recorded everything in exact order, not even what Jesus did while He was still on the earth. This is understandable since Mark didn’t walk with Jesus or ever hear a word He said in person.

So, Mark wrote what he remembered as best he could and as inspired by the Holy Spirit. Bishop Papias also makes this note about Mark according to the Exposition of the Oracles of the Lord (6): “For one thing he took especial care, not to omit anything he had heard, and not to put anything fictitious into the statements.”

The Book of Mark

Most, if not all, of the book of Mark was written in Rome sometime between A.D. 55-59, shortly before Luke wrote his own book. It seems to target Roman believers, particularly Gentiles, which makes sense because reaching the Gentiles was a huge part of Paul’s ministry.

Mark often used Aramaic terms, which he was careful to interpret for his Roman readers, and he liked Latin terms instead of Greek. He carefully explained Jewish customs to them, placed events within the Roman timeline for easier comprehension, and made few references to the Old Testament because they were not familiar with it.

Mark did whatever he could to make it easier for the Romans to understand the gospel of Christ. He even mentions Simon the Cyrene (Mark 15:21) because Simon was the father of Rufus, who most people knew was a well-known member of the Roman church.

You might have noticed that the book of Mark is a bit shorter than the other three gospels. This was intentional on Mark’s part. He wanted to present Christ in a short, easy-to-understand manner. He omits Jesus ancestry and birth and focuses on His good deeds instead with a special emphasis on the importance of service and sacrifice. And, he only refers to Jesus’ teachings in short pieces, so his audience gets the basic gist while not losing their attention. 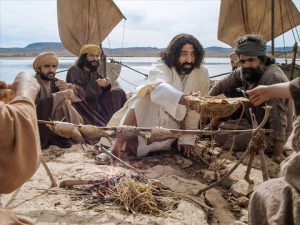 One thing Mark did very well was to highlight Jesus’ humanity. He does this better than any of the other writers of the Bible. He places a special spotlight on Jesus’ emotions and physical limitations (and spiritual limitations, see Mark 13:32), His deep compassion for the sick and for children, and His occasional anger and frustrations.

Mark does an excellent job of explaining the human side of the Son of God while not glossing the fact of who He truly is. Put together with Paul’s letter to the Romans (A.D. 54-68) which is rich in sound doctrine, undoubtedly many Gentiles found salvation during this portion of the apostolic era.

Mark doesn’t talk about himself in his book at all except in Mark 14:51-52. Jesus is being arrested by the Temple guards in the Garden of Gethsemane when, for unknown reasons, a naked man suddenly appears in the background.

“Now a certain young man followed Him, have a linen cloth thrown around his naked body. And the young men laid hold of him, and he left the linen cloth and fled from them naked.”

No one has any proof, but it’s speculated that if the mob that was following the Temple guards went to Mark’s mother’s house looking for Jesus, Mark would have heard the commotion and decided to check out what was going on. Remember, it was his house where the early Christians assembled and hid from the Jewish mobs while Mark was still a teenager. It makes sense they would check to see if Jesus was there.

But you might be wondering…why was Mark naked? Again, it’s speculated that this “certain young man” was probably asleep at 3:00 a.m. when the mob banged on his door, so the linen cloth was likely some kind of sleeping garment or sheet he grabbed off his bed.

It’s not how I would want to be mentioned in the Bible, but I guess Mark was okay with it.

Here’s one little interesting side note about the book of Mark.

It’s strongly suspected that the last twelve verses of the book were not written by him but were added on later to account for Jesus’ resurrection. The oldest two Greek manuscripts of the book omit the twelve verses, and later versions are rife with Greek words suggesting it wasn’t Mark who added them. It also doesn’t solve the mystery of who did.

I don’t think it means the Holy Spirit didn’t inspire this part, though. Everything in the Bible is useful for teaching (2 Timothy 3:16). So even verses like this should be considered for its meaning as we compare them to the rest of the Bible.

So, now you know. Mark was actually John Mark who wrote one of the first books of the New Testament, followed Paul in his early missions, became a reciter of Peter’s teachings, and ran around naked the night Jesus was arrested.

Just more evidence that the Bible is full of interesting surprises.