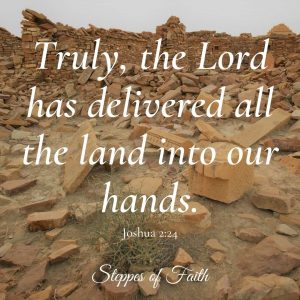 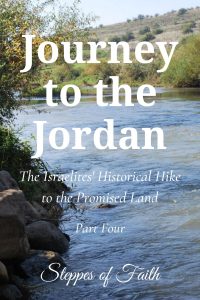 “Truly, the Lord has delivered all the land into our hands.” Joshua 2:24

It had been forty long years of wandering in the desert, but the time had finally come for the Israelites to enter the Promised Land. Sadly, Moses was not with them anymore. God had promised Moses he would not enter the land because of his disobedience. And so, Moses died on Mount Nebo on the east side of the Jordan River. The same fate fell on Aaron, Moses’ brother.

Now, it was time to finish their journey with Joshua leading the way.

After mourning Moses’ death, Joshua commanded the officers to tell the Israelites to prepare to cross the Jordan River. But not all of them would be going. The Reubenites, the Gadites, and half the tribe of Manasseh would stay behind as Moses commanded in Numbers 32.

“Remember the word which Moses the servant of the Lord commanded you, saying, ‘The Lord your God is giving you rest and is giving you this land.’ Your wives, your little ones, and your livestock shall remain in the land which Moses gave you on this side of the Jordan.” Joshua 1:14

The land these tribes possessed is now western Jordan and southern Syria.

After hearing the news, the three tribes didn’t start building new villages and settling down right away. First, they had to help the other Israelites get across the Jordan River and conquer the Canaanites. And Joshua already had a plan on how to begin.

Having been given the spirit of wisdom (Deuteronomy 34:9), Joshua first sent spies into the Promised Land. They were to survey the topography, the food, and the people just like the previous spies did back at Kadesh (see Part Two).

Joshua’s main goal was to know what to expect when they got to Jericho, the gateway to the Promised Land. So, he gave the order to send the spies across the river.

The Israelites were camped at Acacia Grove in the region of Peraea on the east side of the Jordan River. Before the spies could cross the river, they first had to navigate through their enormous camp.

Acacia Grove, or Abel Shittim in Hebrew, meaning “meadow of the Acacias,” was a small ancient city located about ten miles northeast of the Dead Sea. Its modern name is Abil-ez-Zeit. The Israelites’ camp spanned this meadow for many miles due to their large population. The first-century historian Josephus records the campsite was roughly seven miles wide. Its southern edge reached toward the small town of Beth-jeshimoth near the Dead Sea about eight miles to the south while the northern edge laid almost due east of Jericho on the east side of the river. 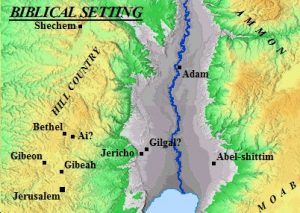 The northern section was where the Israelites kept their headquarters, and that is where Joshua sent out the spies.

After crossing through the camp, the unnamed spies crossed the Jordan River valley. The valley plain varies from 1,300 to 10,000 feet wide and ranges from 50 to 300 feet deep in places. Steep slopes line the valley as the river drops in sea level until it reaches the Dead Sea. The river itself is rather shallow, but the current is swift due to inflow from its tributaries. It also carries a large amount of silt brought down from the Sea of Galilee. Crossing the Jordan would be a bit difficult. 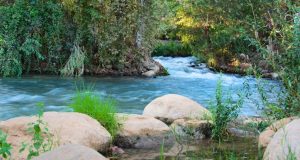 After many hours, the spies successfully crossed the river. From there, they traveled seven miles to Jericho, where they came across a house belonging to a prostitute named Rahab.

Little did the spies know they were being spied upon too.

Many of you know the story of Rahab from Joshua 2, so let’s just do a quick review.

Certain people were watching the Israeli spies, and they quickly sent word to the king of Jericho telling him the spies had entered the city-state where he ruled. It wasn’t an extensive area, so it made sense for the king to make a personal visit to Rahab’s house (Joshua 2:3), where he demanded the spies.

Rahab lied about the spies saying they had left, and she didn’t know where they had gone. But in truth, they were hiding on top of her roof. The king believed her lies and left. Rahab then went up onto the roof and confessed her faith in the God of Israel.

The spies told her they were preparing to conquer Jericho, which was only a few hundred feet away. But because of her kindness in hiding them, they promised not to harm her or her family.

So, the spies instructed Rahab to hang a scarlet rope from her window. The rope was a sign indicating to the Israelites which house was hers, and the house was not to be touched. They promised her as long as no one in Rahab’s family went outside of the house during the attack, the Israelites would not harm them (Joshua 2:17-20). They would spare Rahab’s entire family. 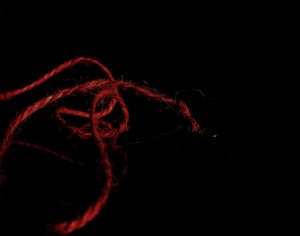 And with that, the spies went on their way.

Several days later, after hiding from the king’s pursuers, the spies reported back to Joshua that everything was just as God had told them.

“Truly, the Lord has delivered all the land into our hands, for indeed all the inhabitants of the country are fainthearted because of us.” Joshua 2:24

Joshua knew what to do. It was time to take the city and the Promised Land.

The next morning, Joshua gave the order to pull up camp and cross the Jordan River. They were not in a hurry, by any means. In fact, once they arrived at the river, they stayed there for three days. Then Joshua made an announcement.

“When you see the ark of the covenant of the Lord your God, and the priests, the Levites, bearing it, then you shall set out from your place and go after it.” Joshua 3:3

Joshua also told them what to expect.

It was the end of the rainy season (about March-April), so the flow rate down the Jordan River was very high. But that’s no match for God.

As soon as the priests’ feet touched the river, the swift-running water stood still and parted just as the Red Sea had done back in Egypt.

Joshua 3:16 says God dammed the water in the city of Adam, which was about fifteen miles north of their position, and soon the priests found themselves standing on dry ground. Three thousand feet behind them walked the rest of the Israelites, who also crossed the river on dry ground.

The journey to the Promised Land had ended just as it had begun.

But there was still a city to conquer to make it official.

After everyone successfully crossed the Jordan River, Joshua laid twelve stones on the banks of the Jordan River to commemorate where the Lord had shown His power and mercy on the Israelites when the river was dried up (Joshua 4:9).

Joshua also commanded one man from each tribe to take a stone from the riverbed to create a memorial to God’s faithfulness. The stones were carried over ten days to their next campsite at Gilgal, about six miles away (Joshua 4:3). 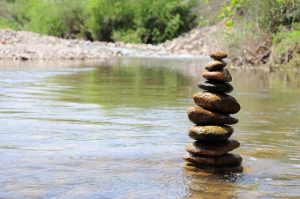 The next order of business was to circumcise every male born in the wilderness who was under forty years old. The first generation of men who were with Moses was circumcised before they left Egypt. But their children, who were born during the journey, had not. So, God commanded Joshua to reinstate this practice as a sign of faith to the Lord, and it had to be done before they took Jericho. God would not allow the Israelites to take the Promised Land otherwise.

As the men healed, the people prepared for Passover. After forty years, manna was still miraculously falling every morning. But for this Passover, the Israelites ate unleavened bread and “produce from the land (Joshua 5:12).” And after they ate the produce, the manna finally ceased to fall.

With Passover behind them and their bellies full, it was time to take Jericho and settle in the Promised Land.

The Conquest of Jericho

The Israelites’ camp at Gilgal was a little over a mile away from Jericho. The city lies within the river valley, which means it would have been a relatively easy walk. As they prepared to march toward the city, God gave them precise instructions (Joshua 6).

On the seventh day, they were to march around the city seven times while the priests blew the trumpets. After the seventh time around, the priests would blow a long blast, and the people were to shout as loud as they could. Then, the walls of Jericho would fall.

No talking was allowed as they marched. They were not to make any noise or sound until Joshua told everyone to shout on the seventh day.

The people obeyed. Then on the seventh day after the seventh time around, Joshua gave the command to shout and take the city.

So, the people shouted, and just as the Lord said, the walls of the city fell flat. The armed men ran in and “utterly destroyed all that was in the city, both man and woman, young and old, ox and sheep and donkey, with the edge of the sword (Joshua 5:21). 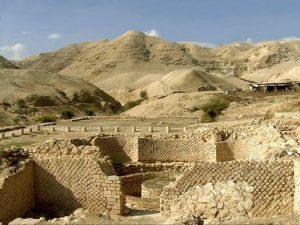 Joshua then commanded the two spies to go back to Rahab’s house and rescue them before they burned the entire city. And after the fires subsided, the men gathered the gold, silver, bronze, and iron and took it to the treasury as instructed.

The Lord was with them, and Joshua’s fame spread throughout the land.

But one young man disobeyed and stole an accursed thing, which is why the Israelites lost their next battle of conquest. Only thirty-six men died, but it was clear the Israelites still had much to learn.

For forty years, the Israelites wandered seemingly aimlessly in the deserts of Sinai and modern-day Jordan. But a journey that was supposed to last only two weeks was continually extended because they disobeyed God. Their grumblings and murmurings angered the Lord, and they paid the consequences for them all.

But now, they had finally entered the land promised to them. It had not been an easy time. Thousands of people died, including Moses and Aaron. Battles were won and lost. They had endured times of plenty and times of thirst and hunger. The journey was long, and the years that followed weren’t easy. But there was hope.

One day many years later, Someone—a Messiah, the promised Christ—would redeem them of their sins. Though the Israelites would reject Him, the Son of God would hang on a cross and die in their place. And not just for them. His grace and salvation would be for all people for all time.

The Lord is near to all who call on His name. He hears their cry and promises to save them. He preserves all who love Him (Psalm 145:18-19). The story of the Israelites’ journey to the Promised Land is simply one example.