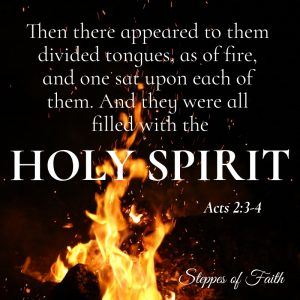 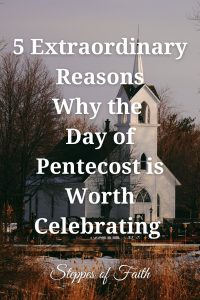 “And they were all filled with the Holy Spirit.” Acts 2:4

Every late Spring, people around the world celebrate Pentecost. Unfortunately, it is a holiday that many churches never mention, yet it is very significant and deserves proper attention. Its history directly affects both Christian and Jewish faiths, and it fulfills one of God’s greatest promises. Here are five ways Pentecost is a special day worth celebrating.

Approximately seven weeks after Moses led them out of Egypt, the Israelites camped at the base of Mount Sinai. The people stayed in the camp while God called Moses to go up the mountain (Exodus 19-20). There on the mountain, God gave Moses the Torah (not just the Ten Commandments) and established the Feast of Weeks (Shavuot).

The new grain offering is in celebration of the spring barley harvest and God’s blessings. It is also an act of worship. As one of three divinely appointed feasts (the other two being Yom Kippur and Rosh Hashanah), God commands the people to go to the temple on Shavuot and make an offering. The day kicks off the Feast of Weeks, also called The Day of Firstfruits and The Feast of Harvest.

The Torah calls the countdown mentioned in Leviticus 23 “Counting the Omar.” It begins on the second day of Passover and lasts for fifty days. The fiftieth day is called Shavuot. However, due to the influence of Greek culture following the conquests of Alexander the Greek, Shavuot eventually became known as Pentecost, from the Greek word pente meaning fifty.

Today, Pentecost is (1) a time of worship of God because of His blessings on Israeli agriculture and (2) a time of celebration of when God gave the Torah to the Jews. For these reasons, Pentecost is often celebrated as the birthday of Judaism.

Because the Jews base their Hebrew calendar on the lunar cycle, Pentecost is always the sixth of Sivan. This is an important distinction from the Gregorian calendar, which western cultures follow.

Pentecost, in the Christian faith, isn’t a set date. It is simply the fiftieth day after the day of Jesus’ resurrection (Easter Sunday), not Passover, making the holiday occur at any time. This is why you might hear some say Pentecost is one particular day while others say it is about a week later, but the correct date, historically, is the fiftieth day from the second day of Passover.

Regardless of the exact date, celebrating Pentecost is very important in the Christian faith. Indeed, it is a very significant holiday for the Jews, but it means so much more than just the giving of the Torah. 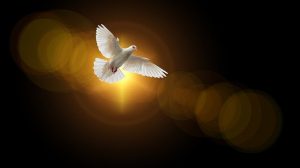 The Giving of the Holy Spirit

About 2,000 years ago, Jesus was crucified and resurrected. He then ascended to heaven (Acts 1:9). Almost six weeks later, Jewish families flooded Jerusalem to celebrate Pentecost (Acts 2:5). Jesus’ disciples were already in Jerusalem. The Lord had told them to wait there.

“And being assembled together with them, He commanded them not to depart from Jerusalem but to wait for the Promise of the Father.” Acts 1:4

They didn’t quite know what they were waiting for other than Jesus’ promise to send a Helper.

While the men entered the Temple to make their grain offerings, the disciples gathered in an upper room to fellowship and pray. Suddenly, they heard what sounded like an unusual gust of wind.

“When the Day of Pentecost had fully come, they were all with one accord and in one place. And suddenly, there came a sound from heaven as of a rushing, mighty wind, and it filled the whole house where they were sitting.” Acts 2:1-2

As the wind blustered, the disciples looked up and saw what looked like flames dancing over their heads.

“Then there appeared to them divided tongues, as of fire, and one sat upon each of them. And they were all filled with the Holy Spirit and began to speak with other tongues as the Spirit gave them utterance.” Acts 2:3-4

Meanwhile, Jews and “devout men from every nation under heaven” were crowding Jerusalem’s streets. Those who were outside the upper room heard and felt the same blustering wind. And as they looked around in confusion, they all began to speak foreign languages.

“And when this sound occurred, the multitude came together and were confused because everyone heard them speak in his own language. Then they were all amazed and marveled, saying to one another, ‘Look, are not all these who speak Galileans? And how is it that we, each in our own language in which we were born?’” Acts 2:6-8

Some of the crowd wondered, “Whatever could this mean?” while others believed they were “full of new wine.” That’s when Peter stood up and began to preach.

A Birthday, Thanksgiving, and Firstfruit

After the Holy Spirit came, Peter immediately stood up and began to preach. Over 3,000 people accepted God’s gift of grace that day (Acts 2:41), and the church began to grow.

“And the Lord added to the church daily those who were being saved.” Acts 2:47

Today, it is estimated there are about 2.3 billion Christians globally, though the number is likely much higher due to underground churches in oppressed nations. It is the most populous religion in the world, and it all began on the birthday of the church.

But Pentecost isn’t only a birthday celebration of the church; it’s also a day of thanksgiving for Jesus’ atoning sacrifice on our behalf.

Remember that Pentecost is sometimes called The Day of Firstfruits. Firstfruits are the tithe. It’s the ten percent God gets back after He has so richly blessed us.

On Pentecost, the Jews brought their firstfruits of grain. Today, we celebrate Jesus. As the perfect Lamb of God, He is the firstfruit of a sin offering made to the Father. Instead of sacrificing bulls, goats, lambs, and other animals, Jesus came to be the perfect sacrifice for our sins. He is the ultimate tithe. He is our firstfruit.

Let us enter His gates with thanksgiving in our hearts (Psalm 100:4-5) as we celebrate Jesus being the firstfruit offering for us. 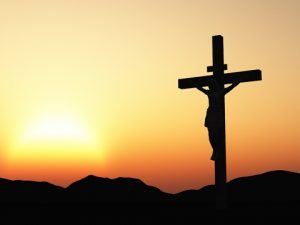 In addition to being a birthday celebration plus a time for thanksgiving and worship, Pentecost is also a wedding.

When God gave the Torah to Moses, He essentially put a wedding ring on His bride’s finger. By establishing a law, He claimed her as His, and He made a covenant never to leave her nor forsake her. This unbreakable covenant continues and will never cease. It is why Jesus will return to save His bride from annihilation before He decimates the antichrist and destroys evil forever (Revelation 19).

Jesus further fulfills His promise never to leave us nor forsake us when He gave us His Holy Spirit.

Though He does not physically walk among us anymore, His Spirit is still with us, guiding and counseling us every day to become more like Him—holy. He is indeed our Helper and our best friend.

“And I will put My Spirit within you and cause you to walk in My statutes, and you will keep My judgments and do them. Then you shall dwell in the land that I gave to your fathers; you shall be My people, and I will be your God.” Ezekiel 36:27-28

For many reasons, Pentecost is a great day of celebration. It is…

We have much to celebrate!

This year, may Pentecost be a reminder of God’s unfailing love and faithfulness as well as an invitation to be filled with the Holy Spirit. May we know His ways and be empowered by the Holy Spirit to live holy lives, bearing much fruit in Him. Our fellowship with the Lord as we abide in His Spirit can only deepen our faith and enrich our relationship with Him.

“Blessed are You, O Lord our God, King of the Universe, who has set us apart by Your commandments and commanded us to be a light to the nations, and has given us Yeshua, our Messiah, the Light of the World.”