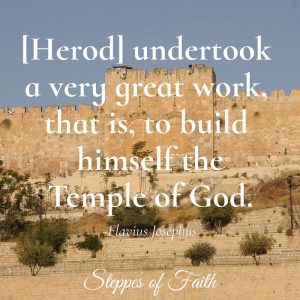 “[Herod] undertook a very great work, that is, to build of himself the temple of God.” -Flavius Josephus

Throughout the Bible and splashed across travel magazines, we hear about the Temple Mount in Jerusalem. It is the site of many events in Biblical and modern history.

The Temple was a remarkable piece of historical architecture and engineering that today’s equipment could not equal, which makes us wonder…

Who made the Temple? What is it made of?

How big is it?

What history does it have?

Where did Jesus go when He was there?

Will there ever be another temple?

It is a pretty amazing building with a very incredible story, including a little prophecy.

In part one of this series, we will discover how this marvel was made amid the Roman-dominated culture of the time. Next week, we will take a walk through the Temple all the way to the Holy of Holies, relive what a day at a Jewish festival might have been like, and where Jesus was in the Temple during certain Biblical events. And finally, in part three, we will learn what eventually happened to this magnificent structure and if a third temple will ever be built.

If you have ever wondered what the Temple in Jerusalem was all about, this is the series for you.

But for now, let’s take a look at the Temple’s history and how it was made.

To truly understand and appreciate the Temple in Jerusalem, we need to look at its history.

King Herod the Great governed Jerusalem on behalf of Emperor Caesar and the Roman Empire during Jesus’ time, from 37 B.C. to 4 B.C.. He was an extremely arrogant, cunning, and paranoid man who commonly oppressed his people to get what he wanted.

He was known for his attempts to dissolve the Jewish religion and customs, and he often either took away people’s civil rights or imprisoned and killed certain people whom he heard might be plotting against him, whether it was true or not. He routinely had spies in the streets watching people who commonly met together. And sometimes he would even disguise himself and mingle among the evening crowds to find out what people were saying about him. If he found a dissenter, he would persecute them in any way he could.

For the people who seemed to support him, Herod made them swear an oath of fidelity as well as a promise of goodwill toward him. Only Pollio, a Pharisee, and Sameas, a highly regarded scholar, were excused from taking the oath because of Herod’s great respect for them.

Herod also excused the Essenes, a strict communal religious Hebrew sect that voluntarily chose poverty and celibacy while promoting charity, daily ritual immersions in water, and studying the books of the elders. (Side note: The Essenes might also be the ones who created what is now known as the Dead Sea Scrolls.)

Herod was a very cruel leader, most known biblically for killing every boy two years old and younger after he heard of Jesus’ birth in Matthew 2:16. But he was always mindful of the temperature of the people, which is why he decided to rebuild the Jewish temple in Jerusalem. 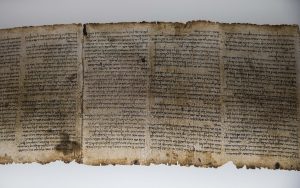 In addition to his paranoia and cruelty, Herod was also widely known for constructing enormous and elaborate structures to impress visiting officials, foreigners, and a variety of guests. Each project was paid with crushing taxes he imposed on the Jewish people, which he often did. Historian Flavius Josephus, who lived in the city at the time, recorded it this way in his book The Antiquities of the Jews:

“The people of Judea, who at the beginning of his rule were in a good economic condition, were humbled to the ground and turned into miserable paupers. He had the leaders killed in order to confiscate their property…The expenses he laid out upon [the Temple] were vastly large also, and the riches about it were unspeakable.”

Herod’s goal was to build the most amazing structure ever known to man—a new Jewish temple. Josephus also writes,

“[Herod] undertook a very great work, that is, to build of himself the temple of God, and make it larger in compass, and to raise it to a most magnificent altitude, as esteeming it to be the most glorious of all his actions, as it really was, to bring it to perfection, and that this would be sufficient for an everlasting memorial of him.”

Herod’s insatiable need for fame and attention consumed him, but he knew he had a problem to solve before his big plan could be a wild success.

The city of Jerusalem was normally home to about 100-200,000 people year-round. In addition, people from all over Israel would come to the city three times a year to celebrate Passover, Pentecost (Shavuot in Hebrew), and the Feast of Tabernacles, which hugely overwhelmed the city.

If Herod was going to renovate and expand the Temple (that is, the Temple the Jews built following their return from Babylonian exile) to make it the greatest temple ever built, it would need to fully accommodate the yearly influx of visitors and their animals. It would also need storage space for additional food and Temple supplies, living quarters, ritual bathing pools, currency exchange sites, and meeting places.

For many years, Herod collected the taxes and stored up construction materials until finally in his eighteenth year of ruling Judea (19 B.C.) he began rebuilding the Temple.

Of course, Herod thought the Temple site was far too small for what he was envisioning. That’s when he decided to build a plaza around the Temple to create the necessary space. But to do that, the plaza would first need some foundational support. As a result, retaining walls were built as a box around Mount Moriah, and the mount was filled in.

According to Josephus, approximately 10,000 men were employed. Another 1,000-1,500 Levite priests were specifically trained to design and build the sanctuary and other holy places in the Temple since lay people were not allowed to enter those places. The workers finished the Temple in three years, but construction continued well after Herod’s death in 4 A.D. 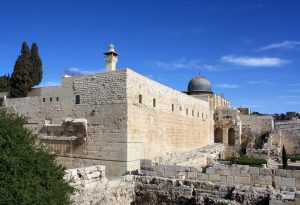 The dimensions of the walls were astounding.

The walls were 16.4 feet thick and 130 feet tall and made of huge block-shaped stones weighing an average of ten tons each. No mortar was used, so the stones were placed extremely flush to prevent shifting. The base of the stones was wider at the bottom than at the top, and each row of stones was three centimeters smaller than the one below to ensure the wall’s stability.

Herod  then placed a platform made of white marble on top of the walls to create the plaza. It was 150-feet high and 150-feet wide according to Josephus, and it was covered in gold. It’s said the plaza reflected the sun so brightly that no one could look at it directly without being momentarily blinded.

The plaza included a portico, enormous overpasses, a number of staircases and courts connecting three levels, ritual bathing pools, money exchange areas, meeting areas, and the Holy of Holies (the Temple proper) which was separated from the rest of the Temple by a veil. An altar for burnt offerings measuring 75 square feet was placed directly in front of the Temple’s bronze doors.

The plaza had eight gates including the Golden Gate through which Jesus entered the city on Palm Sunday. The main western gate called the Gate of Coponius was covered with a golden vine along with a blasphemous Roman golden eagle that was taken down upon Herod’s death.

In the northwest corner was the Antonia Fortress where Roman soldiers were housed as well as a few offices for Roman government officials.

Built with the people’s tax money plus many donations from wealthy Jews who had fled Roman rule, Herod’s Temple was indeed impressive and became his crowning achievement. It now had ample capacity to meet festival needs, it adhered to Jewish laws’ required dimensions, and Herod’s fame increased exponentially.

Unfortunately, Herod’s Temple did not last for too long. The Temple was destroyed in 70 A.D., four years after its completion.

What remains of it today is a hotly contested area. Where the 35-acre Temple Mount is located is also home to the Muslim Al Aqsa mosque and the Dome of the Rock. Jews, Muslims, and Christians alike all claim the Temple site as their holy place, and protests and legal fights continue to this day. 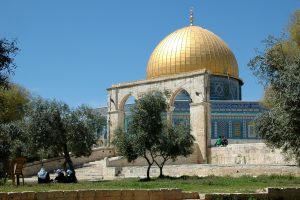 Next week, we will take a walk through Herod’s Temple, reliving what it might have been like to be a pilgrim visiting the Temple for a Jewish festival. We will walk through the gates, wander the plaza, and eventually make our way to the Holy of Holies as we discover the places where Jesus was and what He did during certain Biblical events such as when He turned over the money-changing tables and more.

The Works of Josephus by Flavius Josephus (not an affiliate link) was an invaluable resource as I wrote this series. Though a Pharisee, Josephus is renowned as the foremost historian of Jesus’ time, often having firsthand knowledge of certain events. His works are a must-have resource for students, scholars, pastors, and anyone who wants to learn more about life in the first century and the New Testament. I highly recommend it!

2 Replies to “King Herod and His Magnificent Temple”