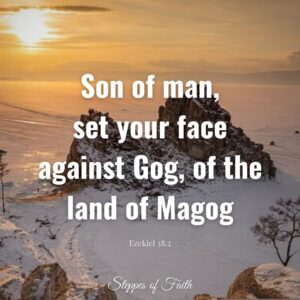 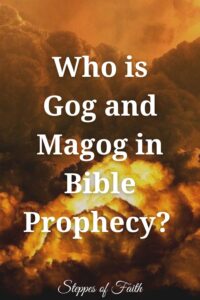 Both Ezekiel 38-39 and Revelation 20:7-8 mention a great battle between Gog and Magog and Israel. The Bible gives us few clues about this end-time prophecy, causing many to speculate who or what Gog and Magog are and where they will come from. However, with a little investigation, we can somewhat determine more details.

What’s in a Name?

The name Gog first appears in Genesis 10:2 as the grandson of Noah. It also appears in 1 Chronicles 5:4.

“The sons of Joel were Shemaiah his son, Gog his son, Shimei his son, Micah his son….”

Based on this Bible verse, some theorize that Gog may be a son of the prophet Joel, but there is insufficient evidence to support this claim. It is possible that Gog was simply a common-enough name for its time.

In conjunction with Magog, Gog appears in both Ezekiel and Revelation, both of which are prophecies of the end times. Ezekiel describes Gog this way:

Ezekiel tells us Gog is the leader of a mighty nation called Magog since Gog is translated as “high” or “supreme.” However, some theologists believe that Gog is not a name but a title such as “President,” “Prime Minister,” or “Pharaoh.”

Others say, formed from an idea in the Septuagint, Gog was the foundation to create other names such as Agog in Numbers 24:7 and Og in Deuteronomy 3:1. Both of these men rebelled against God. Based on this assumption, the Gog in Ezekiel refers to someone who is an enemy of God.

Gog will be essentially a very evil person searching to destroy the Jews and the entire nation of Israel.

We can say with certainty that Gog is a future person and not someone from the Bible’s past for four reasons:

God tells the Israelites in verse seven to “prepare yourself and be ready,” and they would be wise to do so. Gog will have many allies. He will have the leaders of Persia (modern Iran), Ethiopia, Libya, Gomer (either modern Armenia or central Turkey), and Togarmah (eastern Turkey) helping him (v5). They will come upon Israel “like a cloud to cover the land (v16)” to “plunder and take booty (v12).”

But God will not allow Gog and Magog to devastate His people completely. Their invasion will be limited, and their intent of destruction will fall on them instead.

We can trace Persia, Ethiopia, Libya, Gomer, and Togarmah (all grandsons of Noah or founders by them, see Genesis 10) to modern nations (see above). But who is Magog, and where is it now?

It is unknown exactly where Magog is today, but some believe it is in southeast Anatolia (modern Turkey). Others say it was in central Asia where the Mongolians and Huns originated. Still others, like the well-respected first-century historian Josephus, say it is an area where the Scythians once lived in the mountains surrounding the Black and Caspian Seas in the Caucasus region (modern Georgia, eastern neighbor of Ukraine and directly south of Russia).

The Bible, our ultimate authority, indicates Magog is not a reference to one place but many places. Further, Ezekiel 38:2 tells us Magog will consist of Rosh, Meshech, and Tubal, except Rosh may not be a place but a title.

According to the Hebrew Tanakh (Old Testament), Rosh is mentioned over 600 times as the adjective “chief,” often in reference to a “chief priest.” Many pieces of ancient literature also used it to say “head.” Therefore, regarding Ezekiel 38:2, the sentence might be better translated as “chief prince of Meshech and Tubal.”

On the other hand, Rosh could be a geographical place.

Scholars C.F. Keil and Wilhelm Gesenius trace the adjective form of Rosh (“chief”) to the Latin Vulgate, which Jerome translated. He admitted that he did not base his translation on grammar. He further admitted he resisted using it as a geographical location simply because he could find it mentioned anywhere else in Scripture. Jerome’s concession is why many Bible translations, such as ESV, NIV, NET, HCSB, and NLT, translate Rosh as the adjective “chief.” The NASB translation, however, uses Rosh as a location.

It is obviously a great debate, but simple reading of Ezekiel 38:2 implies Rosh was a geographical place. We do not know where it was precisely, except perhaps somewhere around the Caucasus or Turkish region, but it fits in with the possible locations of Meshech and Tubal. 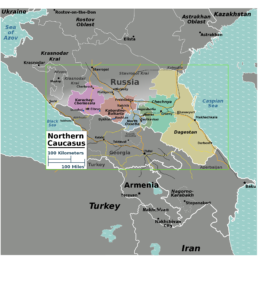 Meshech (not to be confused with Meshach of the book of Daniel) and Tubal were two of Noah’s grandsons (Genesis 10:2). Their descendants conquered separate territories and named them after themselves in the Anatolia region of Turkey. Unfortunately, there is little history about these two groups of people.

According to historians, after a period of internal conflict, both groups were conquered by other armies, eventually coming under the control of the Lydians after the Cimmerian wars in what is now southern Russia.

Both groups retained their ethnic identities, however. The Assyrians knew Meshech as Mushku. Herodotus, the historian, knew Tabal as Moschi or Tibarenoi, which he asserts was a part of the former Persian Empire (Iran) at one time. (One interesting side note is, at the end of the eighth century, the Greeks knew the king of Mushku as Midas, the king with the golden touch.)

Though we cannot be certain since much of their history did not survive past the seventh and early sixth centuries, it would seem Meshech and Tubal continue to exist in what is modern-day Turkey. If their relationship with the Lydians has continued, it might indicate they are still in cooperation with Russia today.

Gog and Magog and “-Stan”

Many scholars believe Gog and Magog will come specifically from the former Soviet republics of Kazakhstan, Kyrgyzstan, Uzbekistan, Turkmenistan, Tajikistan, and possibly the northern parts of Afghanistan. These countries have an overwhelming Muslim following, who will have enough motivation to move against Israel (as the Muslims already do).

Taken together, it seems Magog will originate from the “-stan” countries, Iran, Turkey, Armenia, certain northern African countries, and possibly others such as Iraq and anti-Israel terrorist groups, all in a coalition with Russia.

“You will ascend, coming like a storm, covering the land like a cloud, you and all your troops and many peoples with you.” Ezekiel 38:9

According to Ezekiel, one thing we do know about these countries is they will be a part of Gog and Magog and an enemy of God and Israel. They will seek to take Israel’s wealth, conquer the land, and exterminate the Jews.

However, God will move against Gog and Magog. He will cast judgment on them and destroy them. Ezekiel 39 says God will so utterly annihilate them through infighting and a massive earthquake that Israel will use their weapons as fuel for seven years. And their dead will be so numerous that it will take the Israelites seven months to bury them all (note the use of seven, the biblical number of completion).

The Battle of Armageddon

“Now when the thousand years have expired, Satan will be released from his prison and will go out to deceive the nations which are in the four corners of the earth, Gog and Magog, to gather them together to battle, whose number is as the sand of the sea.” Revelation 20:7-8

We see Gog and Magog mentioned again in Revelation 20. At the end of the Millennial Kingdom, Jesus will release Satan, and he will gather all the armies he can (Gog and Magog) to attack Israel. This is the battle of Armageddon.

The Bible does not tell us much about what happens during the battle, but Revelation 20:9-10 tells us God will cause fire to rain down “out of heaven and devour them.” He will cast Satan into the lake of fire and brimstone with the false prophet and the beast, where they will be tormented forever.

One Attack or Two?

Some debate if the Gog and Magog in Revelation is the same as we see in Ezekiel. We do not have sufficient evidence to draw any definite conclusions, but Scripture indicates there will be two different attacks on Israel. We know that there will be a coalition of countries coming together to do it in both cases.

We can further conclude that Ezekiel’s and Revelation’s prophecies refer to two separate attacks on Israel. Revelation 20 says the Great White Throne Judgement will immediately follow the battle. Yet, Ezekiel’s prophecy says it will take seven years to burn all the dead invaders’ weapons and seven months to bury all the dead. If the Great White Throne Judgement occurs immediately after, there will be no need for any burying or burning.

Even as two different attacks on Israel, it seems both will involve Russia and its allies, and both will be devastating. 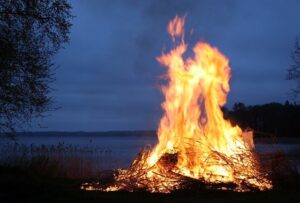 “For the Lord Himself will descend from heaven with a shout, with the voice of an archangel, and with the trumpet of God. And the dead in Christ will rise first. Then we who are alive and remain shall be caught up together with them in the clouds to meet the Lord in the air. And, thus, we shall always be with the Lord.” 1 Thessalonians 4:17

Mr. Rhodes continues his argument of a gap in time between the Rapture and the Tribulation.

If Ezekiel’s prophecy is a precursor to John’s prophecy in Revelation, as many assert, there will be one sure telltale sign of when Gog and Magog will attack—Israel’s self-perceived safety.

Ezekiel 38 says Gog and Magog will attack while Israel enjoys so much peace and security that they will have few if any, weapons. They will “dwell safely (v8,14).” Clearly, this is presently not the case, though many countries are beginning to establish diplomatic relations with Israel under the recently-signed Abraham Accords.

So, while we wait for the end times, we must wait to see when Israel will enjoy a prolonged state of security, enough that it does not fear its enemies any longer. When this happens, we know Gog and Magog will soon launch their attack. And after Ezekiel’s vision has been fulfilled, then we must anticipate the Rapture at any moment.

2 Replies to “Who is Gog and Magog in Bible Prophecy?”