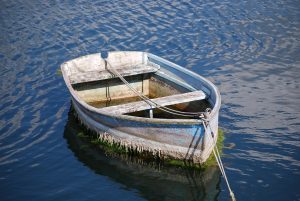 And Peter answered Him and said, “Lord, if it is You, command me to come to You on the water.” Matthew 14:28

One of my favorite stories in the Bible is when Peter jumps out of his boat and walks on water toward Jesus. It’s a story that can be sliced, diced, and dissected in infinite ways to really grasp the its fullness. Most people refer to this story as an example of faith or lack thereof depending on who in the story they’re talking about, Peter or the disciples. I think of faith too, but sometimes I think that Peter might simply have had some impulse issues.

Stay with me here.

Let’s go back over the story from the beginning. In Matthew 14:22, Jesus and the twelve disciples have just finished miraculously feeding over 5,000 people out of only five loaves of bread and two fishes. It had been a long day and Jesus wanted some time to be alone and pray (and probably unwind), so He sent the disciples home ahead of Him.

Near sunrise time, the wind started to pick up and toss around the disciples’ boat, which was now out in the middle of a huge lake. A thick fog was rolling in. This is when Jesus came down from the mountain and walked across the lake to reach the disciples.

One part of this story that I think is unfairly criticized is how the disciples act when they see Jesus coming. Remember that a thick fog was developing, they’re out in the middle of a huge lake with nothing and no one around, then out of the corner of their eyes appears a shadow moving through the fog to which in verse twenty-six they cried out of fear, “It’s a ghost!”

Now, tell me…wouldn’t you be freaked out? I know I would! I don’t blame them one bit for crying out in fear. It’s was probably more akin to a bunch of grown men screaming like tween girls at a One Direction concert. It’s totally justifiable.

Jesus, obviously hearing their screams of terror, tells them to calm down because it’s Him. But Peter stays unconvinced, so he dares Jesus to prove Himself by calling out, “Lord, if it is You, command me to come to You on the water.”

Jesus double-dog dares Peter back by answering, “Come.” I can just see the grin on Jesus’ face, can’t you?

There’s no hesitation by Peter. He hops right out of the boat and starts walking on the water like he’s done it 1,000 times before. And this is always the part where I think, “Wait…what?” Because it’s hard for my human brain to understand what might have been going through his head at that moment. It was either superhuman faith or it was just plain crazy.

The story often reminds me of my nearly eight-year-old son (not the crazy part). He has impulse issues too because of ADHD. There are numerous times when he’s plain not thinking. Like when he darts out into the road to pick up a ball or to cross the street, or when he yells for no reason other than to just hear the sound of his voice even after everyone in the house is telling him to be quiet. Or he uses the arm of the couch like a launch pad to see how far he gets…while people are sitting there. He’s a constant whirling dervish mixed and stirred with chaotic energy. To him, jumping out of a boat because someone, anyone, dared him to do it would not be out of the ordinary.

It’s not easy being a mom to such a kid. I have to be constantly vigilant, always watching for any move he might make. While many moms of kids this age are able to sit next to the playground and have a nice conversation, I’m still on patrol like when the boys were toddlers. You just never know what’s coming next.

It’s not that he’s doing it purposefully (well, except for the yelling thing I mentioned), he’s just exploring and learning about the world. He’s living life “to the full”, you might say. The thought is always in his head, “I wonder what would happen if I did this?” The off he goes with an explosive, impulsive bolt.

I suspect Peter was the same way. 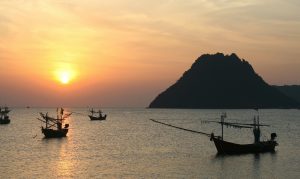 Jumping out of the boat wasn’t the only time Peter did something some may consider impulsive. How about after Jesus was arrested, for example? Peter knew that the Pharisees’ guards were arresting anyone who was following Jesus, but, after they got their main culprit (Jesus), what did Peter do? He went straight to the Pharisee’s home where Jesus had been taken and hung out around a fire with the guards and servants. He didn’t bother to think about his safety, but when he did, that’s when he denied knowing Jesus three times. It might have been better for Peter to hang back until the smoke had cleared, I think.

Another example of impulse was after Jesus had been resurrected. The disciples had decided to go fishing, perhaps as a way to console themselves. They weren’t catching anything until a man standing on the beach told them to cast their nets on the right side of the boat because there were lots of fish there. And that’s when John (we assume) cried out, “It’s the Lord!”

So what does Peter do? He puts on– not off- his cloak and jumps out of another boat so he could swim to where Jesus was standing. He must like jumping out of boats, I don’t know.

We can definitely see that Peter LOVED-LOVED-LOVED Jesus in a very beautiful, radical way. He had tremendous trust and faith in the Lord. It’s enviable, actually. It’s a crazy kind of love. I think it’s awesome!

Did Peter’s excitement mean that he was justified in jumping out of boats and chasing after the very guards who were looking to arrest him? In some way, maybe. I personally think that a little more thinking on his part couldn’t have hurt, yet it’s undeniable that he set an example for us all.

How Can We Show Our Impulse of Excitement?

Now, I don’t mean to disrespect Peter. Not at all. In fact, I truly admire his dedication to Jesus and his heart to spread the Gospel. He was indeed a passionate man. But, he was also impulsive, sometimes in not-so-good ways, ways that wouldn’t go over well with most folks today.

It’s obvious we live in a culture that is quite different from what the disciples knew. Impulse control wasn’t always the common rule of behavior back then, so perhaps we can forgive Peter for being a bit ADHD-like. In today’s world, though, staying in control is very important and quite expected everywhere we go, from restaurants to theaters to classrooms and even church. Not to mention that we are also told that self-control is a fruit of the Holy Spirit. Self-control equals rational thinking and wisdom. But, it can also sometimes hold you back from all God has for you.

This is what I think Peter got incredibly right. Because of his impulse, he wasn’t afraid to express his deep love and commitment to Jesus. He didn’t care who saw it or what they thought of it. In fact, after Jesus had ascended into heaven, Peter was often threatened to stop publicly preaching about the cross or else risk imprisonment. Yet, every day, despite the threats, he always went back. Nothing and no one were going to stop him from sharing the Gospel, and he didn’t care what anyone thought of it.

So, I challenge you to ask yourself how much you’re like Peter. Do you often share the same excitement and faith that Peter had? Would you jump out of a boat to get to Jesus? Are you comfortable openly sharing your faith at any time? Or do you hide it because you’re afraid of what others will think, or that you might get in trouble? What can you do to fight your anxiety so you can share your own radical love for Jesus and lead others to His saving grace? 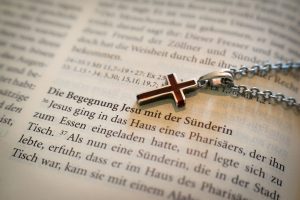 If you don’t know where to begin in becoming an impulsive boat jumper, here are three simple actions to get you started:

Dive into the Word. When you needed to buy a car or appliance, how did you find out which one to get? You did your research, right? The Bible is our reference guide to learn all about who God is and why Jesus died for us. It’s the absolute best way to fall in love with Him and get to know Him better. When you know what His promises to you are and learn to trust in Him, your faith will grow into something you can’t hide…and you won’t want to.

Pray. Spending regular time with the Lord in quiet prayer and meditation is an essential part of growing closer to God. In prayer, we learn how to express ourselves in meaningful ways and be receptive to His gentle encouragement. It is here that we can take all our anxieties and worries to Him and leave them at His feet. Ironically, it’s in 1 Peter 5:7 where we learn that we should cast all our cares on Him, “for He cares for you.” Who knows this better than Peter?

Fellowship. You can’t share your fire and love for Jesus if you stay at home all the time. The Lord tells us that we need to fellowship with others who are a part of Christ. Attend church every week, participate in small groups, gather with other Christians you know over lunch or dinner. Be in fellowship. Socialize. You’ll see that as you do more of this and regularly surround yourself with other believers, your worries will fade and strength of your faith will grow. You’ll feel reassured as you realize you are accepted and loved just as you are, which will give you the confidence to share your faith no matter where you are.

Peter may have had impulse issues, perhaps he could have even been medically diagnosed ADHD. That’s not important. What is important is his outward, unabashed expression of love for Jesus. No fear. No thinking. Nothing holding him back from the God he loved. Not even gravity. I admire that.

What a better world we would all live in if there were more boat jumpers.

It’s not always easy to share our faith or show our commitment to God with others. For some people, it can be quite stressful. Have you had trouble showing others your faith in Christ Jesus? Does it cause you to feel anxious just thinking about it? How did you overcome your fears so you could share your love in excited, perhaps even impulsive, ways? How can we all become better boat jumpers? Come share your comments with us. We’d love to hear from you!

We can learn more from Peter, like when a Gentile, Roman centurion soldier unexpectedly invited him to dinner. Though it was considered taboo, Peter accepted the invitation after a prompting from the Lord. Here’s what happened next.