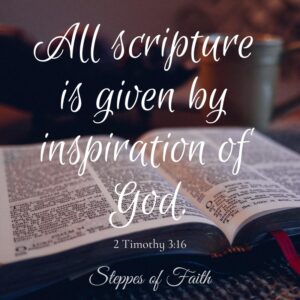 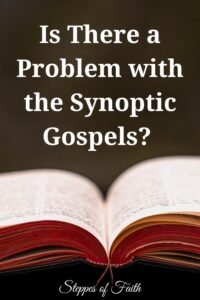 The books of Matthew, Mark, and Luke (but not John) are called the Synoptic Gospels (syn meaning “together” and optic meaning “seeing,” i.e., “seeing together with a common view”). They have strong similarities in their subject matter (Jesus’ ministry, life, and teachings), wording, and order of events. But there are some differences.

New Testament Studies call the dissonance of the gospels the “Synoptic Problem.” Some suggest the gospel writers copied each other’s words. Others say they relied on an independent source of information from someone who was not an eyewitness to Jesus’ life and ministry. But is any of this true?

To solve the Synoptic Problem, scholars have presented several theories that widely span the theological spectrum.

The traditional and, by far, most popular theory is that Matthew is the first written gospel, as we see in our Bibles today. Mark and Luke then wrote their books. However, the belief is they did not write them independently. Both depended on those who came before them.

Early church fathers, such as Augustine, promoted the idea. He was the most famous supporter of the idea that the gospel order is “first Matthew, then Mark, third Luke, and last John.” Augustine’s predecessors also supported the idea, namely Irenaeus and Origen, as well as later theologians.

Roman Catholic scholars in the early 1900s suggested an alternate version of this theory, which became rather popular. They suggested that Matthew wrote his gospel in Aramaic (a Hebrew dialect), and Mark and Luke copied him but wrote theirs in Greek. Later, when a translator converted Matthew’s gospel to Greek, he made his job easier by generously integrating some of Mark’s and Luke’s words and phrases.

However, such a theory does not necessarily support Matthew’s priority, which is why other scholars have suggested a different order.

In the late Enlightenment period of the church (late 1600s), Johan Jakob Griesbach, a German theology professor, put forth a slightly different idea. He upheld that Matthew was written first and Mark was written last (after John) and that Mark used both Matthew and Luke as his sources. Other theologists soon contributed to the theory but failed to gain much traction.

Nevertheless, we can observe that the book of Mark is the shortest of all the gospels, and most of it appears in the other synoptic gospels. Scholars estimate only about ten percent of the book of Mark is original material. Others surmise he only repeats what his mentor, the apostle Peter, told him.

But is Mark’s book an abridgment of the other two Synoptics? If it is, it does not explain why his version of events omits important moments, such as Jesus’ birth and the Sermon on the Mount.

Scholars have proposed various other theories, but a popular one is called the Two-source Theory (others are the three-source and four-source theories). This theory assumes the book of Mark (not Matthew) was written first, the books of Matthew and Luke were written second and third, and they are all interdependent.

It assumes Matthew and Luke used Mark’s writings as a source in their gospels. For evidence, they point to Matthew and Luke sharing a large amount of information as Mark. Mark contains most of Matthew’s and half of Luke’s writings.

For these reasons, scholars argue that Mark’s gospel came first, and Matthew and Luke used his writing as a source.

As the Augustinian and Griesbach Theories suggest, Mark may have copied from Matthew or Luke. However, we can confidently conclude that Luke was not the first gospel writer. He admits it so in the very first few verses of his gospel.

“Inasmuch as many have taken in hand to set in order a narrative of those things which have been fulfilled among us, just as those from the beginning were eyewitnesses and ministers of the word delivered them to us, it seemed good to me also, having had perfect understanding of all things from the very first, to write to you an orderly account, most excellent Theophilus, that you may know the certainty of those things in which you were instructed.” (Luke 1:1-4) 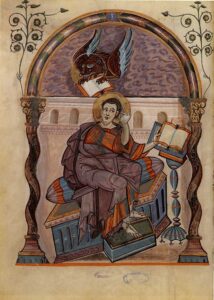 Still, other scholars suggest that Mark is not Matthew and Luke’s only source of information. They theorize these two gospel writers must have utilized a separate, independent source academically called “Q” (from the German Quelle meaning “source”).

No one really knows what the “Q” is. It could be tangible or intangible. It could be a first-century document or parts of one, an oral tradition, random pieces of information Matthew and Luke preserved from Mark, or a combination of each. But it is generally defined as the parts common to both Matthew and Luke’s gospels. Because they are common, they must have used an outside source.

As mysterious as “Q” is, most agree that it is a group of sayings that scholars often call the “Sayings Gospel.” The original version may have included wisdom and eschatological (end times) sayings, as well as others.

The sayings do not appear to be in an arbitrary order; rather, they are presented in a common order, which some say indicates it may have once been an actual, written document.

Some cite evidence of “Q’s” written existence in the Gospel of Thomas, a group of sayings attributed to Jesus written in the mid-fourth century. These sayings and others like them are similar and, therefore, must depend on “Q.” For this reason, they suggest “Q” could not have been purely oral.

Scholars do not know who wrote “Q” or when they wrote it, though most believe it originated in the first century following Jesus’ death and resurrection.

Contemporary German scholar Udo Schnelle observed that some of “Q’s” sayings concerning Jerusalem and the second temple do not point to any military events (i.e., the Roman invasion of Jerusalem in 70 A.D.). Many more comment on the persecution of the early church and martyrdom of the apostles. Therefore, “Q” must have been composed sometime between 40-70 A.D., though the date is hypothetical.

It is important to remember that no evidence exists for a “Q” document, not historically, theologically, literary, or otherwise. Neither the gospels nor any early church fathers or historians suggest such a thing.

We must conclude, then, that it is an idea conjured up by liberal “scholars” who treated the holy Word of God as mere literature without any basis of proof or, apparently, any faith that the Bible is the inspired word of God (2 Timothy 3:16).

In other words, “Q” is a man-made supposition of God’s Word and not holy-inspired whatsoever. 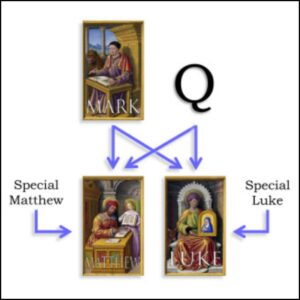 Image courtesy of History in the Bible

If we entertain the idea that “Q” existed for a moment, then we can assume it may have been available to Matthew and Luke.

But what if they did not utilize it? How, then, did they obtain their information? Did they copy it from Mark as the Two-Source Theory suggests, or did Mark copy it from them?

Given this evidence, it is clear each writer composed his gospel independently.

The Answer to the Synoptic Problem

The answer to the Synoptic Problem is there is no problem at all. It simply does not exist. No one has any proof of any literary dependence on Mark, a “Q,” or anything else. The only plausible explanation is what Paul already told us in 2 Timothy 3:16.

“All Scripture is given by inspiration of God.”

In no way did the gospel writers copy each other. They were all eyewitnesses to history, and they were inspired independently by God and moved by the same Holy Spirit.

“No prophecy of Scripture is of any private interpretation, for prophecy never came by the will of man, but holy men of God spoke as they were moved by the Holy Spirit.” (2 Peter 1:20-21)

The synoptic gospels do not contradict but complement each other. They provide harmony and unity, giving us a more thorough picture of Jesus, His life, and His ministry. And we should be grateful for them.

[READ MORE: The Differences Between the New Testament Gospels]

2 Replies to “Is There a Problem with the Synoptic Gospels?”