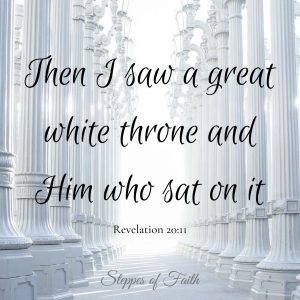 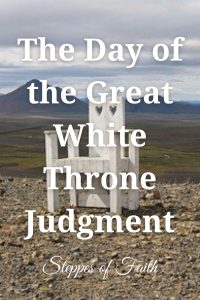 Many born-again believers look forward to the day when the church is raptured, and Jesus returns to destroy Satan forever. They look forward to the Lord’s victory and His ushering in of a “new heaven and a new earth (Revelation 21:1).” But there is a crucial event that many forget that occurs between the Day of the Lord and the establishment of a New Jerusalem.

It is called the Great White Throne Judgment.

It will be a great and wonderful day when Satan is finally thrown into the lake of fire along with the antichrist and the False Prophet. The angels and saints will be singing and praising God in victorious celebration. But there is still one bit of business to attend to before God moves any further.

According to the apostle John’s testimony in Revelation 20, immediately after Satan’s demise, a throne will suddenly appear.

“Then I saw a great white throne and Him who sat on it, from whose face the earth and the heaven fled away. And there was found no place for them.” Revelation 20:11

The word throne is mentioned almost 50 times in the book of Revelation. This particular throne is called the Great White Throne of judgment. Pastor David Jeremiah, who is very astute about Bible prophecy, explains the significance of the term Great White Throne.

“The word great speaks of the infinite One who is the judge. The word white speaks of divine holiness, purity, and justice. And throne speaks of the majesty of the One who has the right to determine the destiny of His creatures.”

Jesus alone—the only One worthy—sits on the Great White Throne to judge every unbeliever after His millennial reign is over. We see this mentioned in Romans 2:16, Acts 10:42, and John 5:22,27. In fact, Jesus Himself talked about this judgment day with His disciples in John 5:28-29, referring to it as the “resurrection of condemnation.”

Only unbelievers who died before the Tribulation will be present when the throne appears. All other unrighteous souls will have died either during the Tribulation or when the universe was destroyed at the same moment as the throne’s appearance.

Heaven and Earth Pass Away

Notice Revelation 20:11 says, “…from whose face the earth and the heaven fled away….”

Why did the earth and heaven flee from Jesus?

Even though Satan had been destroyed, the universe was still contaminated with sin. And because of that, there was no place for it in the presence of a holy God. Which is why, in just a blink of an eye, it was obliterated and pushed into non-existence.

Peter explains the scene in more detail in 2 Peter 3:10.

“But the Day of the Lord will come as a thief in the night, in which the heavens will pass away with a great noise, and the elements will melt with fervent heat; both the earth and the works that are in it will be burned up.”

Following the universe’s destruction and somewhere in an unimaginable divine space, the unrighteous will stand in front of Jesus like prisoners in a divine courtroom. There will be no escape for them. At that point, Jesus will take His seat on the great white throne. 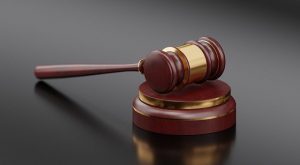 It Doesn’t Matter Who You Are

“And I saw the dead, small and great, standing before God, and books were opened.” (v12)

“Small and great” appears over five times in the book of Revelation. The expression tells us people (meaning those who have already died) of all economic status and race from all over world will stand before the Lord’s throne for judgment. Even so-called religious people will be there. Jesus warned us of this in Matthew 7:21-23.

“Not everyone who says to Me, ‘Lord, Lord,’ shall enter the kingdom of heaven, but he who does the will of My Father. Many will say to Me in that day, ‘Lord, Lord, have we not prophesied in Your name, cast out demons in Your name, and done many wonders in Your name? And then I will declare to them, ‘I never knew you; depart from Me, you who practice lawlessness!’”

It will not matter who you are, what you did, what good or bad habits you had, or even if you pastored a church, prayed every day, or went to church every Sunday of your life. If you did not actively ask Jesus for forgiveness of your sins and accept His gift of salvation, you will stand in front the Great White Throne on judgment day.

Revelation 20:12-13 tells us the souls of the unrighteous will come out from the sea. Those held in Hades will also come forth, and still others in the process of experiencing death will also be raised. The Bible collectively calls these last two places “Death and Hades (v13),” but they are not the same thing.

The difference between the two states of death is that death is the transformation where the soul is separated from the body. Death is the gateway that leads to Hades, the intermediate place of temporary punishment where the souls of the unrighteous stay until the Great White Throne Judgment.

Jesus described Hades in His parable of the rich man and Lazarus in Luke 16:19-31.

“And being in torment in Hades, [the rich man] lifted up his eyes and saw Abraham afar off, and Lazarus in his bosom. Then he cried and said, ‘Father Abraham, have mercy on me, and send Lazarus that he may dip the tip of his finger in water and cool my tongue, for I am tormented in this flame.’ But Abraham said, ‘Son, remember that in your lifetime, you received your good things and likewise Lazarus evil things, but now he is comforted, and you are tormented. And besides all this, between us and you there is a great gulf fixed so that those who want to pass from here to you cannot, nor can those from there pass to us.” Luke 16:23-26

Hades is simply a temporary hell where those who have rejected Christ wait for final judgment. Once a person enters Hades, there is no escape until the day of the Great White Throne Judgment. So, no matter where the unrepentant and unrighteous dead may be, every single place that holds them will be forced to give them up to God. 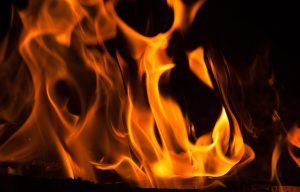 Once everyone is assembled before the Lord’s throne, the Bible tells us “books” will be opened. These books contain the records of every thought, word, and action of every person who rejected Christ throughout time.

The apostle John, the divinely inspired author of Revelation, wasn’t the only one who saw this vision. The prophet Daniel also saw the throne and the books being opened.

“A fiery stream issued and came forth from before Him. A thousand thousands ministered to Him. Ten thousand times ten thousand stood before Him. The court was seated, and the books were opened.” Daniel 7:10

As in other places in the Bible, we are not meant to do any math here. “Ten thousand times ten thousand” refers to the seemingly endless number of unbelievers who are standing before God. It will sadly be an enormous group. Then, Jesus will open the books that provide evidence for the verdict of eternal condemnation.

Verse twelve tells us after the books of the condemned are open, another book will open—the Book of Life. This book contains all the names of those who are redeemed by Jesus’ grace. This book does not contain the names of people who were told the Gospel, only those who repented of their sin by accepting Jesus’ gift of salvation.

Revelation 20 does not tell us what else Jesus does with the Book of Life. But once He confirms who is in the Book of Life and who is not, He will judge each unrighteous soul one by one. Each person will be held accountable and explained to why they are condemned.

It’s at this point, each person will be given new bodies, ones suitable for hell.

Satan, sin, and death will finally be conquered, and holiness will again reign. But God isn’t finished yet.

A new heaven and a new earth will appear, and New Jerusalem will descend from the clouds. What will this magnificent city look like? The Bible gives a clear description in the final part of this series on the Tribulation and the millennial age to come, The Beauty and Promise of the New Jerusalem.

“Heaven and earth will pass away, but My words will by no means pass away.” Matthew 24:35