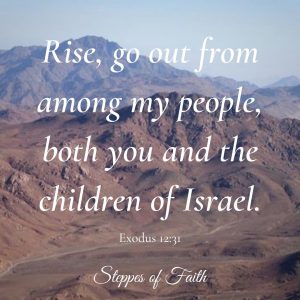 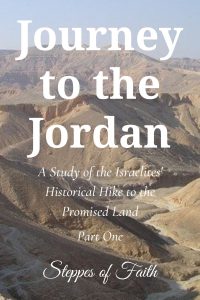 “Rise, go out from among my people, both you and the children of Israel.” Exodus 12:31

Even if you have only watched The Ten Commandments on television, you’re probably familiar with the story of the Israelites wandering in the wilderness for forty years before finally entering the Promised Land.

We know the people experienced hunger, thirst, disease, serpents, and even combat. But how many of us are familiar with the places where they camped and the conditions they endured?

How challenging was the land to navigate? Where were the places where they stopped to rest, and why did God lead them to those particular towns?

Let’s explore the geography of the route they took, the events that occurred along the way, and why it was all an illustration of God’s goodness and patience.

As you probably remember, under God’s command, Moses led the Hebrews out of Egypt. Pharaoh had finally relented following the twelfth plague from the angel of death passing over the land. Those who had the blood of a lamb painted on their doors were spared death. But those who didn’t (like Pharaoh) saw their first-born son killed. Soon after, Moses and the Hebrews gathered their belongings, plundered the Egyptians (Exodus 12:36), and hit the road.

At the time, the Hebrews were enslaved in a city called Pi-Ramesses (modern-day Qantir) in the land of Goshen. Goshen is in the northeast portion of the country, north of Cairo and east of the Nile River delta. It was the most prosperous city in the world at the time, not just because of slavery but also because of the abundant natural resources of the area. 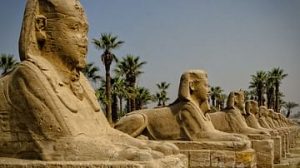 From Pi-Ramesses, Moses led the Israelites southeast down the Egyptian east coast.

The beginning of the journey wasn’t too difficult. It was springtime, the summer heat had not yet begun, and the land was reasonably flat, making it easy for the group to stay together.

Traveling southeast, they headed toward the Gulf of Suez, which lies between Egypt and the Sinai Peninsula. After passing by the town of Succoth, they made camp at Etham

“So, they took their journey from Succoth and camped in Etham at the edge of the wilderness.” Exodus 13:20

The camp at Etham was the first of 42 stops the Israelites would make until they reached the Jordan River forty years later.

After leaving Etham, the Israelites continued south along the coast of Egypt. God went before them in the form of a pillar of fire at night and a pillar of cloud by day (Exodus 13:22). The land continued to be relatively flat and easy to navigate.

Their next stop was in Pi-HaHiroth, located next to the Gulf of Suez, which is the northwest portion of the Red Sea. It was during this stop that God hardened Pharaoh’s heart and caused him to pursue his former slaves. The Israelites had traveled approximately 75 miles at this point.

It was during this stop at Pi-HaHiroth that Pharaoh’s army overtook the Israelites (Exodus 14:9). The people cried out, and Moses said,

“Do not be afraid. Stand still and see the salvation of the Lord, which He will accomplish for you today.” Exodus 14:13

God then told Moses to raise his rod and stretch out his hand over the sea. God divided the sea, and the Israelites crossed it on dry land.

Fortunately, the town of Pi-HaHiroth was located near the narrowest portion of the Gulf of Suez. This area of the Gulf is less than 100 feet above sea level, which meant it wasn’t too deep or too wide to cross.

God had led them to the best possible place to make an escape. 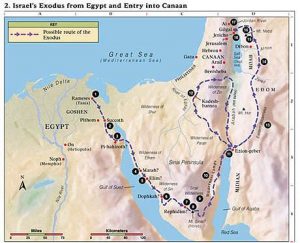 With Pharaoh’s army defeated, the Israelites successfully crossed the Gulf of Suez to the Sinai Peninsula. It’s not clear why God didn’t lead them directly east from the Red Sea, where the topography wasn’t too challenging. We can only conclude from Exodus 14:31 that God was using this time to discipline His children and gain their trust.

It might seem like a long time had gone by at this point, but their arrival at the Wilderness of Sin was only about one month after they left Egypt (Exodus 16:1).  Nevertheless, the people were grumbling for food. More importantly, God knew they needed strength to cross the mountains to get to the eastern side of the peninsula.

So, God provided quail for them to eat meat. And the next morning, they got their first taste of Manna (Exodus 16:13-14).

After a week of resting and regaining their strength, the Israelites left the Wilderness of Sin and began climbing the mountains and hills. First, they came to the mountain town of Rephidim. Here, the people were getting thirsty, so they cried out in anger for water.

“Why is it you have brought us up out of Egypt to kill us and our children and our livestock with thirst?” Exodus 17:3

So, God commanded Moses to go to nearby Horeb and strike a rock so drinking water could come out of it.

“Behold, I will stand before you there on the rock in Horeb, and you shall strike the rock, and water will come out of it that the people may drink.” Exodus 17:6

The split rock is still found there today. 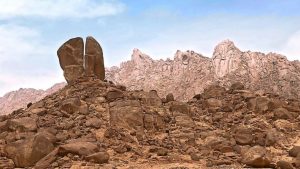 Also occurring while in Rephidim was an attack by the Amalekites. In defense, Moses stood on top of a hill with his staff raised until the Israelites had won (Exodus 17:8-13).

Rephidim was also where Moses’ father-in-law, Jethro, who lived in the region, came to visit him in Exodus 18.

A Year on Mount Sinai

Three months after the Israelites left Egypt, summer was beginning to heat up. The Israelites were still attempting to cross the Sinai Mountains in the southern tip of the Sinai Peninsula. At this elevation of approximately 7,000 feet, the Israelites were able to stay cool, but they were getting tired. So, they camped in the Wilderness of Sinai in the shadow of Mount Sinai (Exodus 19:1-2).

They remained at Mount Sinai for just over a year, and it was a highly eventful year. 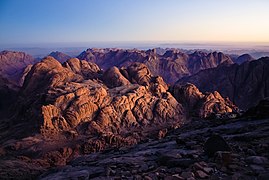 It was during this year-long stop that God finally decided to show Himself to the people. He shrouded Mount Sinai with a thick cloud and commanded the people to stand at the foot of the mountain. He called Moses up the mountain where He gave Moses the Ten Commandments (Exodus 20) as well as a vast number of other rules governing servants, violence, animal control, property, annual feasts, the Sabbath, priestly garments, and much more (Exodus 20-31; Leviticus 1-27).

Also, during that year, the Israelites created a golden calf to worship (Exodus 32) while Moses was on the mountain talking to God for forty days and forty nights (Exodus 24:18). Their idolatrous behavior greatly angered God.

But when His anger finally subsided, He put them to work.

The Ark and the Tabernacle

For most of the remainder of the year, the people stayed busy building the Ark of the Covenant (Exodus 37) to hold the ten commandments and the Tabernacle of Meeting to carry God’s glory (Exodus 40:34). God also consecrated Aaron and his sons to be the head priests, and He taught them as well as all the priests how to carry out their duties adequately.

Once the tabernacle was complete, God commanded the Israelites to pull up camp and leave the mountains. However, they could not travel at will.

With God’s glory filling the tabernacle, God gave the command they could only travel whenever the cloud of God wasn’t hovering above it, which was always during the day (Exodus 40:38). That meant it was only at night when fire was above the tabernacle that they could continue their journey.

By now, it was almost summer in the second year of their journey. The Israelites were leaving the coolness of the mountains and heading toward the desert heat of the northern plains area.

Thankfully, the restriction of only traveling at night meant they could walk during the coolest hours with God’s pillar of fire lighting the way. 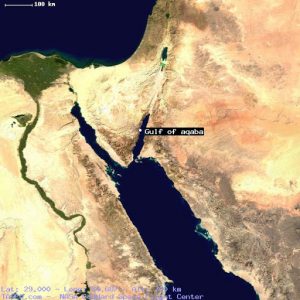 After leaving the Sinai Mountains, the Israelites turned north along the eastern coast of the Sinai Peninsula and the Red Sea. The cloud of God had gone up from the tabernacle so they could travel freely. The cloud settled again when they arrived at the Wilderness of Paran (Numbers 10:12) to an area called Kadesh. Located in the plains of Moab, Kadesh laid at the northern tip of the Red Sea’s Gulf of Aqaba.

Though called a wilderness, meaning few trees and vegetation, the land in Kadesh was fertile and flat in what would otherwise be a wasteland. It was an excellent place for the people and animals to rest and refresh, for soon they would be traveling again.

This time into the land of Canaan.

2 Replies to “Journey to the Jordan: A Study of the Israelites’ Historical Hike to the Promised Land Part One”