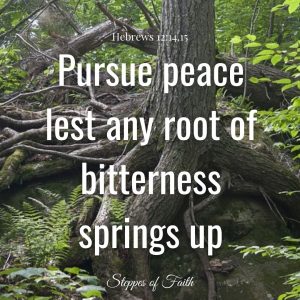 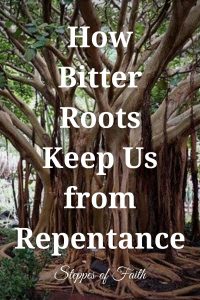 “Pursue peace with all people, and holiness…lest any root of bitterness springing up causes trouble.” Hebrews 12:14,15

Most of us probably have a friend or loved one we wish would find Jesus. We pray and pray for them, but nothing happens. They refuse to go to church and want nothing to do with God, and they stay blind to their sin. Why does it seem they can’t or won’t repent?

The answer is often based in bitter roots.

In Genesis 25, we read about Esau selling his birthright to his brother Jacob.

Jacob was a creative kind of guy. Verse 27 says he was a “mild man,” which means he was generally laid-back, friendly, and agreeable. He liked to stay home with his mother, Rebekah, to help her around the house. And, he didn’t care for adventure.

Esau was the complete opposite of Jacob. Esau was rough, stubborn, a “skillful hunter,” and a “man of the field.” Let’s just say he didn’t mind getting his hands dirty.

So, one day, Esau came in from working the fields feeling very tired and hungry. He walks into the house to find Jacob cooking stew, so he demands Jacob to give him some. But Jacob, being so creative, took advantage of Esau’s distracting hunger and made a deal with him—the stew for his birthright. And Esau didn’t give it a second thought.

“And Esau said, ‘Look, I am about to die. So, what is this birthright to me?’

‘Then Jacob said, ‘Swear to me as of this day.’

‘So, he swore to him and sold his birthright to Jacob. And Jacob gave Esau bread and stew of lentils; then he ate and drank, arose, and went his way. Thus, Esau despised his birthright.” (Genesis 25:32-34)

One’s birthright was equal to a double portion of a father’s inheritance. It also gave him the authority to rule over the household should anything unfortunate happen to the father. Having a birthright was enormously valuable to a son. But as verse 34 tells us, Esau despised it.

We should not immediately think Esau hated or felt contempt about his birthright when we read he despised it. Merriam-Webster’s Dictionary also defines despised as “unworthy of one’s notice or consideration.” So, verse 34 is simply telling us he didn’t care much about it or give it much thought.

We might also conclude that Esau and Jacob had previous conversations about the birthright, enough for Jacob to discern his twin brother’s unfortunate attitude about it. This is why Esau is known as irreligious or profane.

Recall the favoritism that occurred in Jacob and Esau’s family. Rebekah favored Jacob, while Isaac favored Esau. Isaac and Esau were very close. So, it’s a little confusing why Esau cared so little for his birthright. Something must have happened in his life that made him bitter about it.

But the point of this story isn’t about making hasty choices. God uses it to illustrate what ungodliness means.

We may have a relationship with God (as Esau did with his father, Isaac), but if we refuse His blessings, it is because we are ungrateful for what He does for us. And in doing so, we push God away.

If we continue reading the book of Genesis, we find that Esau pushed God away his entire life. He broke every moral rule and never once tried to repent. It’s not that he couldn’t repent. He always could, but he had no desire to seek God.

Why? It is because he thought he couldn’t change. He thought he is who he is, and he can never change, so why seek God? Why bother? He may have even felt great regret for being such a fool. Regardless, Esau hung onto his bitter root. He allowed bitterness and stubborn pride to take over his life. 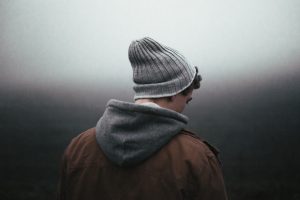 Esau wasn’t the only one in the Bible with a bitter root. We find another example in Mark 5 when Jesus encounters a man possessed by countless demons.

“For [Jesus] said to him, ‘Come out of the man, unclean spirit!’ Then He asked him, ‘What is your name?’

Satan had a solid demonic grip on this man. Verses three through five say people often bound him with shackles and chains, but he was so powerful, he could pull them apart. And for an unknown number of years, he would aimlessly wander naked around the Decapolis mountains and tombs day and night “crying out and cutting himself with stones.”

With whatever right mind he had, he probably thought this was his fate; nothing would ever change. How could it? So, he held onto his bitter root.

But then Jesus showed up one day, and everything changed.

Verse six of Mark five says Legion saw Jesus far off, and “he ran and worshiped Him.” Did you catch that? He saw Jesus and immediately ran to Him. Even in his demented state, he recognized the Son of God. Then, he worshiped Him. Unlike Esau, this man sought God. He sought repentance and deliverance.

Many sinners are more like Esau. It is challenging for a person to give up or attempt to change one’s sinful nature. They become comfortable in their lifestyle and feel no need for God. They don’t want to give up what they’ve become accustomed to, so they never repent.

On the other hand, some people do want to repent, but they are afraid of what the transformation of God’s grace and power will do to them. It seems too painful. After all, people are typically afraid of things they don’t understand. They fail to realize the pain lasts for only a moment because overwhelming joy immediately follows (Psalm 30:5).

Legion knew this, which is why he sought Jesus as soon as He arrived. And after Jesus threw the demons into nearby pigs, Legion felt instant freedom. The chains of his despair—his bitter roots—were gone. The joy of the Lord had taken its place, and he was forever changed.

You Gotta Have Faith

The most significant difference between Esau and Legion is, somewhere deep within him, Legion had faith. He sought the Lord because he had faith.  We cannot find God if we don’t have faith. It takes faith to believe He is willing to forgive through His power and grace. And God will give His grace to anyone who asks for it.

But how do we find faith when a situation seems hopeless? How can there be faith if we are too busy clinging to a bitter root? Thankfully, God is not content to leave us alone. He sends the Holy Spirit to step in and help us find the strength to simply believe His grace is real.

We find the strength to have faith when we can believe God is willing and able to forgive. And it is within that faith that we find God. And in finding God, we find repentance if we truly desire it. 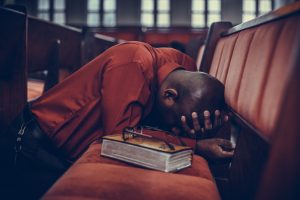 “…Looking carefully lest anyone fall short of the grace of God; lest any root of bitterness springing up cause trouble, and by this many become defiled.” (v.15)

The author of Hebrews is directly referring to Esau here, whom he mentions in verse 16. He goes on to explain.

“For you know that afterward when he wanted to inherit the blessing (note: Isaac’s blessing), he was rejected, for he found no place for repentance, though he sought it diligently with tears.”

Think back to Genesis 27 when Isaac was dying. He wanted to bless Esau and give him his inheritance. But when Esau tried to get it, it was too late because Jacob had already disguised himself as his brother and deceptively took it. Esau begged and pleaded with Isaac to bless him anyway or somehow take it back from Jacob, but Isaac would not. The deal was done, and now it was too late.

The point here is Esau initially held onto a bitter root so much he flippantly traded his birthright away that one fateful day. He purposely pushed his father’s blessing away, all for a bowl of soup. And because Isaac would not bless him, the root became even more bitter. It took hold in his heart, and he pushed God away even more.

The author of Hebrews is cautioning us against Esau’s behavior. He warns us to look carefully for others who are away from God because we don’t want a bitter root to take hold of them. Deep-seated bitterness is a dangerous thing. Though not impossible, those who practice it often have an extraordinarily difficult time finding God.

We must be careful and vigilant to pursue those who have rejected or walked away from God entirely or don’t have the strength to seek Him at all. We must pursue them with peace and holiness (Hebrews 12:14), with an effective witness, so we might inspire them to seek God and experience His amazing transformative grace and joy. If we don’t, they will continue clinging to their bitter root.

As the church, it is our job to loosen the grip of bitterness and pull up its roots forever. It is only in destroying bad roots that one can experience true freedom and eternal life. It is only under God’s grace and our faith in His sovereign power that we find repentance and create new roots in His love.