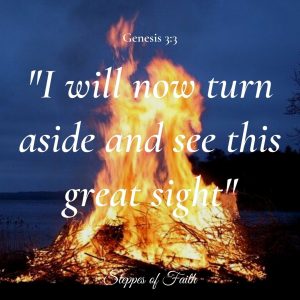 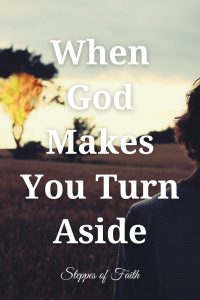 “Then Moses said, “I will now turn aside and see this great sight.” Genesis 3:3

Every once in a while, something grabs our attention. Something makes us quickly stop in our tracks. I don’t mean those times when we get distracted by squirrels or butterflies. I’m referring to things that are so odd or unexpected that they make us suddenly turn aside from what we were doing.

Often, these are not mere coincidences, especially in the Bible.

Several people in the Bible had encounters with God, where He made them suddenly turn aside from what they were doing. By examining how God approached them, we can learn why God is trying to capture our attention and what His intentions are for us.

Gideon and the Angel

The Midianites were a widely known tribe of herdsmen from present-day Saudi Arabia. They commonly mixed with the Moabites, who lived on the east side of the Jordan River. Both tribes worshiped the pagan god Baal. They also engaged in sexual relations with the Israelites and persuaded some of them to worship Baal just before they took possession of the Promised Land (Numbers 31:1-18). So, God commanded the Israelites to take vengeance on them.

The Midianites’ crushing defeat created a slow-burning hatred for the Israelites, which led them to oppress and terrorize God’s people for many years.

The book of Judges picks up the story of Gideon. He was threshing wheat on his father’s land just before one of the Midianite incursions (Judges 6-8). He was well aware of the Midianites’ cruelty and their penchant for stealing and destruction, so he often hid all the wheat in a winepress. But while he was doing so, he was suddenly forced to turn aside.

An angel appeared to Gideon as he was threshing, greeting him by saying, “The LORD is with you, you mighty man of valor (6:12)!” Naturally, an odd greeting from an angel that suddenly appeared out of nowhere caused Gideon to stop everything he was doing. As many of us may know, the angel announced to Gideon that he would lead an army to defeat the Midianites once again.

God often interrupts our busyness to gain our attention and give us direction. Had the angel not made such a startling statement, Gideon may have ignored him. Instead, the angel caused Gideon to turn aside, completely drop what he was doing, and give him his full attention.

The angel was then able to deliver God’s message—it was time for Gideon to stop farming and do what God was calling him to do. And so, Gideon went on to save Israel with only 300 men.

Moses and the Bush

After fleeing to Egypt, Moses met the daughter of a Midianite priest and married her. He then went to work for his father-in-law, Jethro, tending the sheep. One day while he was with the flock near Mount Horeb, the Lord spoke to him through a burning bush. Such an amazing sight would certainly turn someone aside.

“And the Angel of the Lord appeared to him in a flame of fire from the midst of the bush. So, he looked, and behold, the bush was burning with fire, but the bush was not consumed. Then Moses said, “I will now turn aside and see this great sight, why the bush does not burn.” Genesis 3:1-3

We don’t have to be busy or distracted for God to turn us aside suddenly. Many times, we’re just doing our usual thing, living our everyday lives. But then God does something spectacular we simply cannot ignore.

How We Turn Aside

It may not be a burning bush. It could be the startling words of a friend, criticism from a boss, something incredible (good or bad) we see, hear, or read that gets our heart racing, something inspirational, or even an unexpected act of great kindness. Regardless of the delivery, God is trying to capture our attention.

God may not be sending us on a formal mission like Moses or Gideon. His message may not be conveying a totally new direction in our lives, although many times it does. Sometimes, He is simply trying to shake us out of our waywardness, our complacency, or outright pridefulness and get us back on the track of righteousness. And if it takes something big like a burning bush, you can bet God will do it because He loves you so much.

In Moses’s case, however, God was calling him to something much bigger than himself. It not only required great sacrifices in his family; It also cost him his life. But it saved an entire nation from destruction and restored the land promised to them by God Himself.

Sometimes God will make us turn aside to do something big. But more often, He’s just trying to correct our path so we can continue responding appropriately to His calling in our lives, fulfilling our purposes for His kingdom.

Paul and the Light

The apostle Paul was also forced to turn aside. Many of us are familiar with how God got his attention while he was on the road to Damascus in Acts 9.

“As he journeyed, he came near Damascus, and suddenly a light shone around him from heaven. Then he fell to the ground and heard a voice saying to him, “Saul, Saul, why are you persecuting Me?” (v3-4)

Paul (formerly Saul, the Greek version of the Jewish name Paul) was a famous headhunter. His hatred for Christians was unmatched. He persecuted them until their deaths regularly. In fact, he was very likely present, if not in command, when Stephen, Jesus’s disciple, was martyred by stoning (Acts 7:54-60). And, if Paul wasn’t killing them, he was throwing them into jail (Acts 8:3).

His unrelenting persecution caused the early church to scatter. What Paul didn’t anticipate, though, was the scattered church formed the first missionary outreaches. Hearing of this, Paul went to the High Priest and asked for a letter to take to the synagogue in Damascus, stating he had permission to capture any Christians he found there and bring them back to Jerusalem for trial.

It was on this famous trip where God forced Paul to turn aside.

Jesus was paying a personal visit.

God Will Use Anything

Jesus shone a light so bright it caused Paul and his companions to fall instantly to the ground. Paul soon discovered the light had blinded him. Despite the disability, Jesus commanded him to continue to Damascus, where he would meet Ananias to receive a special blessing and healing. This personal encounter is why Paul is considered an apostle like Jesus’s original disciples.

Paul’s incredible chance meeting with Jesus caused him to turn aside dramatically and permanently. His amazing conversion inspired Paul to preach the Gospel and plant numerous churches across portions of southern Europe, Asia Minor, and the Middle East, bringing thousands of people to Christ. He also wrote most of the New Testament.

Paul’s story reminds us that God will use any means necessary to accomplish His great plans. Paul’s blindness and subsequent transformation spared many lives; it also expanded the church’s geographical outreach farther than it had ever gone.

God will make you stop and turn aside for many reasons. He may not use a bright light, but He will do whatever is necessary to soften our hearts so we might receive salvation and fulfill His plans. 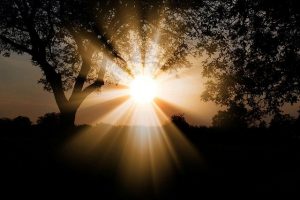 Jesus Makes Us Turn Aside

Jesus’s entire ministry was about making people turn aside.

Again and again, we read in the Gospels His effect on a wide variety of people such as Mary Magdalene, Zacchaeus, the wild man in the cemetery (Mark 5:1-20; Luke 8:26-39), and even the Pharisees. But there was no more significant group of people who He turned aside than the disciples.

Peter and his brother, Andrew, were busy casting their fishing nets into the Sea of Galilee. Catching fish to sell was their primary source of income. But then Jesus unexpectedly showed up one day and said, “Follow Me, and I will make you fishers of men.” The Bible says in Matthew 4:20, they immediately dropped their nets and followed Him.

Just down the road, Jesus found two more brothers, James and John, standing with their father, Zebedee, in a boat fixing their nets. Jesus again invited them to follow Him. And again, they dropped everything and followed Him (Matthew 4:21-22).

Later, in Matthew 9:9, Jesus walks past a tax collector’s office and sees Matthew. Like the others, He walked right up to Matthew and said, “Follow Me,” and Matthew immediately quit his job and followed Him.

And on it went for most of the disciples. Each time Jesus approached them, they each immediately turned aside and followed Him. And that’s just how God works. Sometimes, He will walk right up to us wherever we are and personally invite us to follow Him.

The question is whether we will respond. Will we drop everything and turn aside for God? 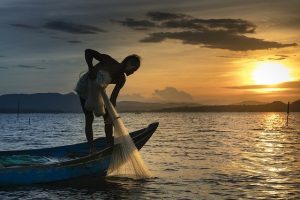 How Will You Respond?

God will use burning bushes, angels, bright lights, and countless other means to get our attention. Whatever it takes, He will do it.

We must always remember God bases His intentions for us on pure love. He longs to set us free from sin and death. He longs to bless us, and He will do anything necessary to keep us on the right path so we can lead joyful, fulfilling lives while we work to spread the Gospel message.

Regardless of how it happens, we must decide whether we are going to respond.

Moses saw the burning bush, but he wasn’t required to turn aside. Gideon talked to the angel, but he didn’t have to agree to battle the Midianites. Paul could have chosen to stay blind. And none of the disciples had to quit their jobs to follow a Man they didn’t know.

Each of them responded to God’s call. Each of them turned aside, dropped everything, and followed Him.

When God calls you…when He causes you to turn aside…what will you do? How will you answer Him?

Now, ask yourself this:

Are you ready for all He has planned for you?

2 Replies to “When God Makes You Turn Aside”