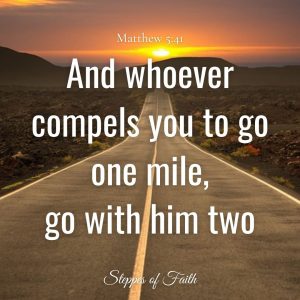 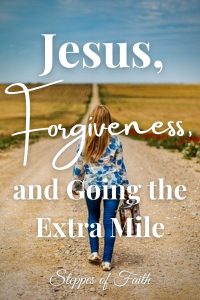 “And whoever compels you to go one mile, go with him two.” Matthew 5:41

Jesus often taught how to love and live at peace with others throughout His ministry. In Matthew 5, He touches on these subjects as well as several others, including the importance of forgiveness and generosity. Most notably, in verse 41, He tells us to go with someone two miles even if we are only required to go just one.

What did Jesus mean by this command? What was its context? Jesus gives us three illustrations to help us understand what forgiveness looks like and why going the extra mile is so important.

In Matthew 5, we see Jesus teaching the Beatitudes (“Blessed are the…for they shall be…”), the command to be the salt of the earth, to seek peace with an enemy, to not lust, to avoid divorce and swearing frivolous oaths, and to be patient and forgiving.

Much of Matthew 5 makes sense until we get to verse 38, the part about forgiving others. For many of us, forgiveness is a challenging thing to do. So, Jesus gives us three simple illustrations to help us out.

First, Jesus addresses the issue of taking an eye for an eye.

“You have heard that it was said, ‘An eye for an eye and a tooth for a tooth.’ But I tell you not to resist an evil person. But whoever slaps you on your right cheek, turn the other to him also.” Matthew 5:38-39

For most of us, getting hit in the face creates an instant and usually violent reaction. After all, it’s painful! Surely revenge needs to be taken. But Jesus tells us no. Don’t move. If someone slaps us, we should offer the other cheek for them to hit too.

That’s counterintuitive to us. It makes no sense. But when we look at Jesus’ life, we often see Him getting spit on or yelled at by random people. Later, on the night of His arrest, the Pharisees slap Him, and the guards torture Him. But does he retaliate? No, He doesn’t. He lets them hit Him all they want, as a lamb led to the slaughter (Isaiah 53:7)

Why? First and foremost, it is because He is holy and without sin. He is the God of peace—Jehovah Shalom—not of violence.

The second answer is this: If He hit back, He would disobey His own law. Not just the law to love others, but also the one that says vengeance belongs to God alone (Deuteronomy 32:35).

But the day for vengeance has not yet come. The Bible calls it the Great White Throne Judgment (Revelation 20:11), and it will occur after the Tribulation period has ended. Until then, Jesus commands us to “turn the other cheek” as He did.

The motto in verse 38 is to be patient with others, forgiving them, knowing God will have His vengeance on them one fateful day.

The Shirt Off Your Back

Jesus backs up His face slapping command with illustration number two in Matthew 5:40.

“If anyone wants to sue you and take away your tunic, let him have your cloak also.”

A Jewish tunic is the equivalent of a shirt, usually made of linen or cotton, that could be either long like a dress or shorter like a modern dress shirt. It is worn under a vest or prayer shawl, but often it is worn under a cloak, especially if the man is Orthodox Jewish. When the high priests and elders arrested Jesus in the garden, the traditional belief is He was only wearing a tunic. 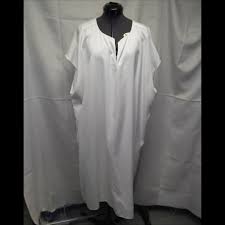 A cloak is like an outer coat or robe, which was also typically long but could also be short. For women, it is like a floor-length cape. 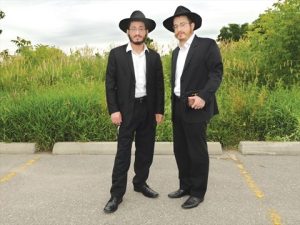 Jesus’ command in verse 40 is one of forgiveness and generosity. If someone wants our tunic (or shirt), give it to him without objecting. But don’t miss this: What must one do to give someone their tunic? Right, you must take off your cloak first. So, while you have your cloak off, go ahead and give that to the other person too. Give him everything.

Obviously, Jesus is aiming the illustration toward men. It is unlikely He was condoning women to be naked. Still, the command to forgive and be generous is for us all. Such a godly attitude and behavior pleases the Lord and brings His blessings.

Forgiveness and the Extra Mile

“And whoever compels you to go one mile, go with him two.”

Jesus commands we go two miles anyway, if not more.

To be willing to go two miles carrying your enemy’s pack while being subjected to his (or her) constant insults and threats takes an enormous amount of forgiveness, patience, and generosity. Only someone with a pure heart—a heart wholly centered on the kingdom of God—could do it. But very few of us have such a heart.

The command to go the extra mile reminds me of a unique story I heard recently from a very well-known theologian.

When You Won’t Give Your Coat

The story was all about Matthew 5:41. It goes like this.

A Jewish man was walking along a dusty country road carrying a very heavy pack to his destination. The day was hot, and the man was quickly getting tired when he saw a Roman soldier on a horse heading his way.

The man looked for somewhere to hide, but there was nowhere to go. So, he waited for the soldier, hoping he would ride by and not pay attention to him. But as expected, the Roman stopped and ordered the Jew to carry the soldier’s pack. Unfortunately, it was in the opposite direction of where the man was going.

Not wanting to be arrested, the Jewish man obeyed the Roman law to carry the soldier’s pack one mile. He hoisted the second heavy pack onto his back on top of the one he was already carrying. Stooped over from the weight, the man turned around and walked back down the road with the soldier.

Along the way, the soldier made fun of what the man was wearing and how he talked, among other insults, until finally, the soldier taunts the man with a question.

“If I asked you for your house, would you give it to me?” he asked.

The man replied, “Yes, I would give it to you.”

“If I asked you for all your money, would you give it to me?” asked the soldier.

“Yes, I would give it to you,” the man replies again.

“How about your coat? Would you give me your coat?”

The man straightens up a bit and sternly says, “No, I would not give you my coat.”

The stunned soldier looks down from his horse at the overburdened man inquisitively and says, “You mean you would give me your house and all your money but not your coat? Why?”

“Because the coat, I have,” the man answers.

Such a story is an excellent illustration of what Jesus is teaching in Matthew 5:41. 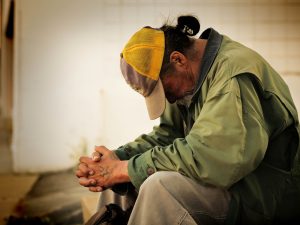 The Heart of God

The Jewish man says he would indeed give the soldier his house and all his wealth, but he only said this knowing he didn’t have either one to give. But when asked about his coat, the one thing he did have, the man says he would not give it. Certainly not to a Roman. His greed, insecurity, and lack of compassion kept him from being generous.

This is not the heart of God, and that’s exactly Jesus’ point.

Here, the man is obeying the law and carrying the Roman soldier’s pack. He’s doing what is expected of him. But he’s only doing the minimum. When asked to go above and beyond the law, the man flat-out refuses.

We cannot say we are obeying God on the one hand and yet blatantly ignore His other commands. It is not our place to pick and choose. Truly faithful obedience to God reflects the heart we have and our love for Him, and we show that by our behavior and attitude toward others.

Colossians 3:23 says we should do everything as if we are doing it directly for the Lord. It doesn’t matter how you feel about someone, whether they are your enemy or not. God says we treat everyone the same, with kindness, forgiveness, patience, peace, generosity, and self-control (Galatians 5:22-23) just like we would for God. In fact, God says we should do it for our enemies most especially, which is what Matthew 5:38-42 is all about.

Jesus’ third illustration here in verse 41 is one that should hit home for us.

It’s one thing to tolerate being hurt by an enemy or even an angry friend or (ex)spouse. It also might be easy to simply give away our shirt or coat, especially if it means that person will go away. And to carry your enemy’s pack out of compulsion might be bearable so long as it’s only one mile. But for most of us, to carry an enemy’s pack for two miles is altogether different. Nevertheless, God commands us to do it.

Going the extra mile not only shows forgiveness to our enemy, it also shows compassion. It is evidence of God’s love and forgiveness working in us, which we, in turn, show others. We pour out our love for God onto others, and in doing so, we become living examples of the Gospel.

It’s important to remember we are often the only Jesus most people will ever meet. Our lives must reflect who He is.

I love the old saying from the 1980s, “What Would Jesus Do?” That’s a great barometer when we encounter an enemy. In this case, would Jesus carry His enemy’s pack an extra mile? You bet He would. In fact, He would carry it all the way to the cross, into the grave, and back out again, which He did. 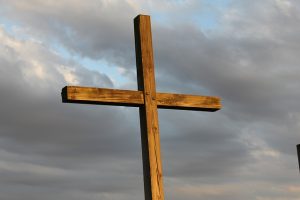 Forgiveness Can Change the World

The next time you face an enemy, how will you respond? With revenge? Spite? Or will you just put up with him until he goes away?

God calls you to something more.

Choose instead to forgive. Choose patience and generosity. Turn the other cheek, give away your shirt and coat, plus whatever else someone asks of you, and be generous with your blessings. And always offer to go the extra mile (or miles) for someone.

Your act of kindness might just be what your enemy needed, one that makes him less an enemy and more like a friend. And perhaps he will eventually meet Jesus because of you.

Going the extra mile for someone reflects God’s heart and His kingdom, and it can change the world. Including yours.

4 Replies to “Jesus, Forgiveness, and Going the Extra Mile”