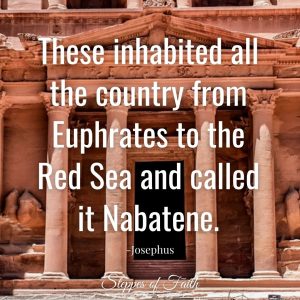 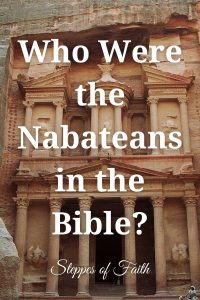 “These inhabited all the country from Euphrates to the Red Sea and called it Nabatene.” Josephus

The period between the Old and New Testaments is often called the 400 Silent Years. But those years were not very silent. The Nabateans were forming a new kingdom in the Holy Land. Historians say their influence dates to the fourth century A.D., and their power existed well into the first century.

Though Nabatean influence in politics and culture did not last as long as other kingdoms, we can see evidence of them in the Middle East plus many interesting events of the Bible.

Originally a nomadic tribe from the areas around Negev (south-central Israel), the Arabian Nabateans settled on the east side of the Jordan River, occupying both Edom and Moab territory (from the Red Sea to the Euphrates River) at the time when Joshua led the Israelites into the Promised Land.

The Nabateans controlled a lucrative spice trade utilizing the King’s Highway, a highly trafficked path connecting Egypt and Arabia to lands in the north as far as Syria and Babylon. Their market also stretched along a known spice route from the southern end of Edom north through portions of Mesopotamia to Gaza, a strategic seaport on the Mediterranean Sea. Because the city was located where the King’s Highway and the spice route crossed, Petra soon became a thriving city center from 400 B.C. to 106 A.D. 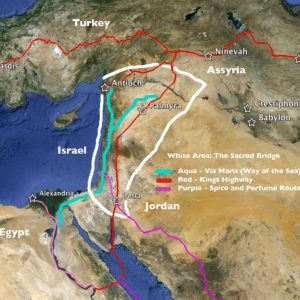 After the Israelites were taken captive by the Babylonians, the Edomites and Moabites moved north into Judah and became known as the Idumaeans. Their thirst for conquest led them to Jerusalem both during Ezra’s rebuilding of the Jewish temple and while Nehemiah rebuilt the city’s walls. We also see them mentioned in Mark 3:7-8.

“But Jesus withdrew with His disciples to the sea. And a great multitude from Galilee followed Him, and from Judea and Jerusalem and Idumea and beyond the Jordan.”

With the former Edomite and Moabite lands left unoccupied, the Nabateans moved in and found great agricultural success within the Trans-Jordan area. They also took over Edom’s former capital (Petra), located south of the Dead Sea. Petra became a thriving city center from 400 B.C. to 106 A.D. 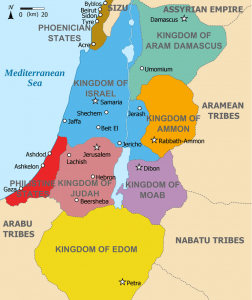 The Nabateans quickly adapted to their desert home through their use of unrivaled engineering marvels. Their most notable feat was how they collected rainwater and stored it for later use.

They developed ceramic pipelines and reservoirs using siphons, dammed the nearby wadis to capture rain during the wet season, and created terraces to trap topsoil off the hills and divert water to irrigation lines that led to their crops.

The Nabateans were especially known for creating large cisterns to capture rainwater. The cisterns were covered with a waterproof cover and placed underground along their trade route to sustain the traders as they traveled. They strategically marked the cisterns with symbols only the Nabateans understood, which protected the cisterns from thieves. The constant availability of water allowed the Nabateans to remain active in their trading year-round, unlike their competitors. 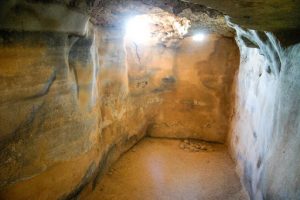 Perhaps the Nabateans are most famous for is the grand entrance to Petra. They discovered they needed to carve the entrance and the tombs located inside from the top to the bottom instead of the traditional carving of bottom to top. Their discovery allowed them to create unique architectural designs that have stood the test of time and weather.

Over time, the Nabateans’ accumulation of wealth helped them expand their territory as far north as Damascus (where Paul encountered them after his conversion in Acts 9) and to become both a political and military powerhouse. The Romans and Herodians made repeated attempts to subjugate the Nabateans for over 150 years, but the Romans were not victorious until the early second century (see below).

Since that time, their capital city of Petra has sat almost empty. Though it has become a popular site for tourists, artists, and archaeologists, some Bedouins still use the old tombs as dwellings. 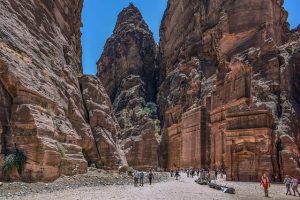 Nabateans in the Bible

The Nabateans are not directly spoken of in the Bible, though there are a few references of their existence. They are most commonly identified as descendants of Ishmael (Abraham’s oldest son by his wife, Sarah’s, handmaid, Hagar) and his oldest son, Nebajoth (Genesis 25:13). Such lineage would mean they were Canaanites (insert link: http://www.steppesoffaith.com/family/biblical-perspective-world-history-kids-whatever-happened-canaanites).

Ancient historian Josephus, a highly respected historian during the time of Jesus, also refers to their Ishmaelite descent in his book, The Antiquities of the Jews (1.12.4). Both living in the same area at the same time, it is likely he obtained his information directly from the Nabateans. His information matches with Genesis 21:21 and 25:13.

“When the lad (Ishmael) was grown up, he married a wife, by birth an Egyptian, from whence the mother (Hagar) was herself derived originally. Of this wife, were born to Ismael twelve sons: Nabaioth, Kedar, Abdeel…These inhabited all the country from Euphrates to the Red Sea and called it Nabatene. They are an Arabian nation and name their tribes from these, both because of their virtue and because of the dignity of Abraham their father.” (Josephus 1.12.4)

The Apocrypha details the Maccabean Revolt (160-166 B.C.) in the book of Maccabees. During this time, the Nabateans had their first king, Aretas I, who was pressing further into Judah, thus contributing toward the Jews’ revolt in their defense of independence. The revolt was successful, and Aretas had to rethink his plans, allowing Israel to remain at peace for several more years.

We also see evidence of the Nabateans in the Gospels.

Nabatean King Aretas IV’s daughter married Herod Antipas, the son of Herod the Great (Herod’s mother was Nabatean). Aretas had a good relationship with Antipas until he decided to divorce Aretas’ daughter to marry his brother’s wife, Herodias. Antipas’ marital decision caused John the Baptist to condemn him, to which Herodias got her revenge when she persuaded her daughter to ask for John’s head as a birthday present (Matthew 14:6-12; Mark 6:21-29).

While Aretas’ spurned daughter returned to Petra, Aretas assembled an army to attack Antipas. Aretas was successful, but the Romans came to Antipas’ aid, forcing Aretas to retreat.

Paul and the Nabateans

We later see evidence of the Nabateans in both the books of Acts and 2 Corinthians.

When Paul met Jesus on the road to Damascus, the city was under its second Nabatean control. King Aretas I first gained control after Antiochus Epiphanes was assassinated in 164 B.C. His grandson, Aretas III, regained control of the city after Antiochus XII of Cele-Syria was defeated in the battle of Cana (Josephus, Antiquities, 13.15.1-2).

After Paul converted to Christianity in Damascus, the Bible says he immediately went out to preach the Gospel. Those who heard him were astounded that the same guy who they had heard was killing the Christians was now preaching Jesus is the Christ. Paul’s exuberance greatly upset the Jews in Damascus, and they set out to kill him, causing Paul to go into hiding.

“Now, after many days were past, the Jews plotted to kill him. But their plot became known to Saul. And they watched the gates day and night to kill him. Then the disciples took him by night and let him down through the wall in a large basket.” Acts 9:23-25

Paul recalls the incident in 2 Corinthians 11:32.

“In Damascus, the governor, under Aretas the king, was guarding the city of Damascus with a garrison, desiring to arrest me. But I was let down in a basket through a window in the wall and escaped from his hands.”

Acts 9 says it was the Jews who were after Paul, but Paul says it was Aretas who wanted him. The indication is the Jews had stirred up the Nabatean authorities against him. They continued to do so several more times as they made repeated attempts on Paul’s life (Acts 13:50; 14:2; 17:13).

The Decline of the Kingdom

Following Aretas IV’s death, his son, Malichus, assumed the Nabatean throne. Slowly, the Nabateans lost sections of its territory to skirmishes with the Romans on its borders. The loss caused Malichus to attempt courting the Romans’ favor by sending Nabatean soldiers to help attack Jerusalem and destroy Herod’s Temple in 70 A.D. Malichus’ strategy did not work. However, Jesus’ prophecy about the temple was fulfilled.

“Then Jesus went out and departed from the temple, and His disciples came up to show Him the buildings of the temple. And Jesus said to them, ‘Do you not see all these things? Assuredly, I say to you, not one stone shall be left here upon another that shall not be thrown down.'” Matthew 24:1-2 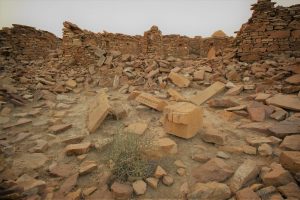 The next Nabatean king was Rabbel II, who succeeded Malichus after his death. The Nabateans loved Rabbel II even though he continued to lose more territory to the Romans. Eventually, the Nabateans lost their high status in the region, and Rome annexed the entire kingdom on behalf of Emperor Trajan. The kingdom then became the new Province of Arabia (Arabia Petrea) in 106 A.D.

Petra continued to thrive for about another century as its people enjoyed sustained success in the spice trade and agriculture. But by the middle of the third century, the region declined, causing Emperor Diocletian to reorganize the provinces. The northern half of Arabia (of the former Nabatean kingdom) kept its name, but the south, including Petra and the surrounding wadis, were absorbed into the Province of Palestine. Both northern and southern provinces are now a part of modern-day Jordan. 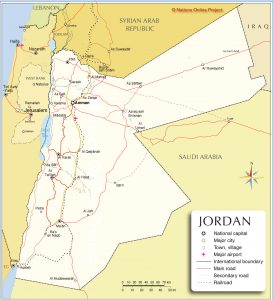 Though the Bible does not explicitly mention the Nabateans, it is clear they were very present and even involved in certain Biblical events. Their history not only helped fulfill Biblical prophecy, but they also helped the early church spread the Gospel and shape the Middle East into what it is today.

3 Replies to “Who Were the Nabateans in the Bible?”