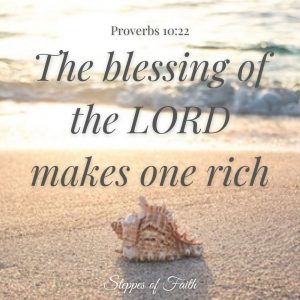 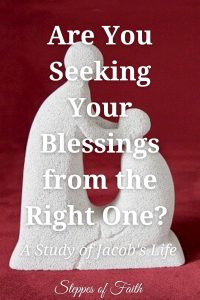 “When he wanted to inherit the blessing, he was rejected, for he found no place for repentance.”

When Isaac and Rebekah gave birth to twins, the Bible tells us Isaac loved Esau, and Rebekah loved Jacob. And the boys loved their parents. But as the boys grew, Esau became a confident son while Jacob sought his blessings by devious methods. Later in their lives, God blessed them both, but Jacob’s blessings were more challenging to obtain. But, when he finally got it right, God made sure he didn’t forget.

In the book of Genesis, Jacob’s life shows us the consequences we face when we seek our blessings from the wrong sources. And it shows us the solution.

In Genesis 25, Isaac, son of Abraham, and his wife, Rebekah, give birth to twin boys, Jacob (meaning “heel grabber” or “deceiver”) and Esau (meaning “red”). From the beginning, Jacob envied Esau.

“Afterward, his brother came out, and his hand took hold of Esau’s heel; so his name was called Jacob.” Genesis 25:26

The Bible tells us Esau grew up to be a skilled hunter, but Jacob was a mild man who liked to stay home with his mother. We might assume Jacob was an amicable, laid-back sort of guy. Perhaps he was in many ways. But when it came to his brother, Jacob remained envious enough to form a deceitful plan.

One day, Esau came in from the field feeling exhausted from a long day of hunting. He walked into the house to find Jacob cooking a stew, so he asked for a bowl of it. But instead of simply handing a bowl to Esau, Jacob made a demand.

As you might recall, Esau handled his birthright flippantly, declaring, “Look, I am about to die; so, what is this birthright to me (v32)?” and handed it over to Jacob. Esau suffered consequences for being dishonorable and irreligious, while Jacob seemed to get what he wanted.

Years later, their father, Isaac, lost his eyesight and feared he would soon die, so he called for Esau. He told Esau to go hunting and cook a final meal for him so he could finally give Esau the patriarchal blessing (Genesis 27:2-4). As the firstborn son, tradition held that Esau was entitled to receive a double portion of Isaac’s inheritance and become the head of the family. It was a position of great power and influence.

However, Esau didn’t know that Rebekah, his mother, was anxious for Jacob to have the inheritance, not Esau. So, while Esau was gone, Jacob and his mother created (another) plan to deceive Isaac and rob Esau.

Rebekah cooked up a meal, and Jacob covered himself in goatskin, disguising himself as Esau. In just a few hours, Jacob soon tricked his father into giving him Esau’s blessing (Genesis 27:5-17). He finally got his father’s blessing.

Jacob may have felt he finally won the grand prize, but he soon found himself on the run.

Esau returned from hunting to learn Isaac had already mistakenly blessed someone else. It didn’t take long for Esau to realize it was Jacob—again (v30-41). Esau begged Isaac to bless him anyway, but Isaac could only give him a secondary blessing (v39-40). From then on, Esau vowed to kill Jacob, prompting Jacob to flee to Padam Aram (modern northern Jordan) to hide on his Uncle Laban’s farm.

During his journey, God visited Jacob one night in Bethel. In a dream (the famous Jacob’s ladder dream, Genesis 28:10-15), God promised to bless Jacob’s descendants and, one day, gather them all back to the land of Israel. When Jacob woke up, he was excited to know he would receive another blessing. So he made an altar and a vow to God.

“If God will be with me, and keep me in this way that I am going, and give me bread to eat and clothing to put on so that I come back to my father’s house in peace, then the LORD shall be my God. And this stone which I have set as a pillar shall be God’s house, and of all that You give me I will surely give a tenth to You.” Genesis 28:20-22

Despite all Jacob had done, God promised to bless Jacob’s family. Jacob was no doubt grateful, but he still wasn’t fully satisfied.

Jacob continued his long journey to Padam Aram on the east side of the Jordan River to his uncle’s farm, where he served for twenty years (Genesis 31:38). During that time, he met his cousin, Rachel, and fell madly in love with her. He eventually married her as well as her sister, Leah, and had many children. His uncle also caused him great hardship and mistreatment. So, once again, Jacob once again sought to deceive.

After his time of service was complete, Jacob packed up his large family and all the animals Jacob felt were due to him and secretly left the farm (v1-21). His Uncle Laban pursued him and, eventually, caught up to him. It was a very unpleasant encounter (v22-42). They argued at length, but they eventually made peace, and Laban blessed Jacob (v55).

Another blessing, but Jacob still was not satisfied.

Jacob took his family south to see Esau. It was time to make peace with his brother.

He sent messengers to Esau announcing he would like to reconcile. When the messengers returned, they told him Esau agreed to meet him, and he was bringing four hundred men with him (Genesis 32:6). Jacob became very afraid, so he humbly prayed to God and reminded Him of His promises.

“I am not worthy of the least of all the mercies and of all the truth which You have shown Your servant.” V10

That night, Jacob sent his family and livestock across the Jabbok River. Once he was alone, a “Man” came to him and wrestled with him all night long (v24). The Man is understood to be the pre-incarnate appearance of our Lord Jesus Christ.

The Man did not overcome Jacob, so He “touched the socket of his hip” and dislocated the joint. Despite what must have been great pain, he reached out and grabbed the Man. The Man demanded Jacob let Him go, but he refused. That’s when Jacob made one last heel grab.

Jacob finally figured out where he should receive his real blessings. Not from Esau or his father, Isaac. And not from his uncle/father-in-law. He could not receive any real blessings or approval from a person. Real blessings only come from the Lord.

God honored Jacob’s plea in verse 26. From then on, Jacob’s name would forever be changed to Israel, for he had “struggled with God and men” and won (v28). Jacob would no longer be known as “heel catcher” or “deceiver” but “God’s fighter” or “he who struggles with God.”

Struggle indeed dotted Jacob’s life. He struggled with Esau, Isaac, his uncle, his wives (Genesis 30), and God Himself. And so, Jacob named the place where he fought with God Peniel, which means, “I have seen God face to face, and my life is preserved.” 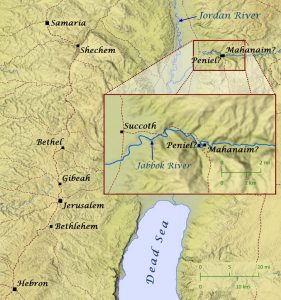 Where True Blessings Come From

All his life, Jacob sought to be blessed, but it always backfired. Consequences followed him for many years until he finally realized he had been looking for blessings in all the wrong places. Only God provides real blessings, ones that have tangible impacts on our lives.

When Jacob met Esau to reconcile, Esau was surprisingly happy to see his brother, and he forgave Jacob of everything. A true blessing all on its own. And God kept His promise to continue blessing Jacob throughout his life. But to make sure Jacob never forgot the struggles he endured to gain them, he forever walked with a limp (Genesis 32:31-32).

God leaves reminders for us too.

God occasionally makes us think back to that dark, lonely place where we felt there was nowhere to go but to Him. He doesn’t want us to forget that moment when we finally surrendered to Him and refused to let go. The reason is simple: We cannot appreciate God’s blessings if we forget the journey we endured to get them.

We need to stop looking for the approval of others and humbly look only to God, the author and perfecter of our faith. His blessings are all that matter.

Are you seeking your blessings from the right source?

2 Replies to “A Study of Jacob’s Life: Are You Seeking Your Blessings from the Right One?”