“And your sons shall be shepherds in the wilderness forty years.” Numbers 14:33

It had been over two years since the Israelites left Egypt. As we learned in Part One, the people had escaped the Egyptian army and crossed the Red Sea. They crossed the Sinai Peninsula and its mountains and received the Ten Commandments. They also built the ark of the covenant and the tabernacle of meeting to house God’s glory. Now, God is leading them to the Wilderness of Paran on the northern end of the Gulf of Aqaba. He was ready to lead them into the Promised Land.

Unfortunately, the Israelites didn’t respond to this great moment as they should. Consequently, God took them on a side trip through the land of Canaan. Constant rebellion ensued, and many lives would soon be lost.

Beginning in Numbers 13, God told Moses to send spies into the land of Canaan to find out who lived there, what the land was like, and if the cities were more like camps or fortresses. So, Joshua and Caleb led the spies into Canaan (the same area of land God had already promised to Caleb in Joshua 14:13-14).

The spies headed north into the Wilderness of Zin, which is modern-day southern Israel. From there, they explored as far as the town of Hebron, about 20 miles south of present-day Jerusalem. After cutting down a branch with a cluster of grapes and gathering pomegranates and figs, they headed back to Moses with a report.

Caleb and Joshua were eager to take the land, but the other spies were not. A great argument broke out between them and the people, but the Israelites became convinced it was a bad idea to enter the land.

Moses and Aaron then fell on their faces before God praying for His forgiveness of the Israelites’ rebellion. God indeed forgave them, but as we know, every act of rebellion has consequences.

For the other spies who were with Joshua and Caleb, God promised they would die in the wilderness. However, He did permit their children to see the Promised Land if they were under twenty years old (Numbers 1:29-31).

God put the other consequence on the Israelites in general. Like the spies’ fate, God swore they too would all die in the wilderness. However, their children would wander in the wilderness for the next forty years. Some of them would make it to the Promised Land, and others would not.

Sure enough, the rebellious spies soon died from a plague. After a period of mourning, the remaining Israelites left Kadesh and started marching north.

The Israelites walked to the northwestern side of the Wilderness of Zin, where the Sinai Peninsula (Egypt) meets the southern end of modern-day Israel. Here, they attempted an attack on the Amalekites within the Promised Land’s border. The Lord was not with them because of their previous rebellion. And so, He allowed the Amalekites and Canaanites to counterattack them, driving them back to Kadesh. 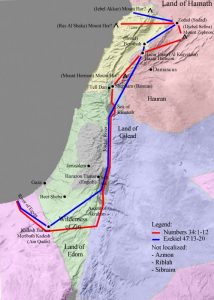 Kadesh became their main encampment for many years. Here, they would bury Miriam, Moses’ sister (Numbers 20:1). It was also the site where God commanded Moses and Aaron to speak to a rock and bring water out of it. But they disobeyed, and Moses struck the rock instead.

Water still came out of the rock, but Moses and Aaron had not followed God’s instructions. Their consequence was that they would not personally lead the Israelites into the Promised Land. They had come all that way, but their failure to honor the Lord in the sight of the people that day meant they would never see Israel.

“Then the Lord spoke to Moses and Aaron, ‘Because you did not believe Me, to hallow Me in the eyes of the children of Israel; therefore you shall not bring this assembly into the land which I have given them.’” Numbers 20:12

Kadesh is also where a group of young people rebelled against Moses and attempted a small uprising. Moses told them to take metal censers and burn incense in them before the Lord. God Himself would choose which of the men was holy.

The next day, the young people refused to burn the incense (more rebellion), so God caused a great earthquake that swallowed them and their entire households. The earth then closed back over them.

Two hundred and fifty other men were burning incense, however, but it was too late. God killed them too but with fire (Numbers 16:1-40).

After establishing Aaron as the High Priest and setting up the structure of the priesthood, it was time to leave Kadesh. God led the Israelites across the Wilderness of Zin to Mount Hor at the Edomite border. It was about a day’s walk from Kadesh, and it sat at the westernmost edge of the Edomite territory.

There on Mount Hor, the Lord instructed Moses to take Aaron’s priestly garments away and give them to Aaron’s son, Eleazar. Soon after, Aaron died on the mountain, fulfilling his consequence for striking the rock. The Israelites remained at Mount Hor for thirty days to mourn Aaron’s death (Numbers 20:24-29).

Number 33:37 tells us that at this point, it was the end of summer in the Israelites’ fortieth year of wandering in the wilderness, and Aaron was 123 years old. 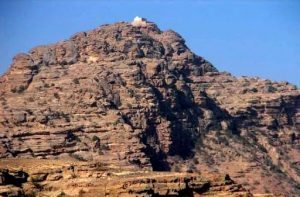 The Israelites then headed north toward Moabite territory southeast of the Dead Sea. But first, they had to cross through Edom.

The king of Edom had already said the Israelites were not allowed to pass through his land (Numbers 20:14-21). So, the king of Arad, an area within Edom, attacked them.

The Israelites quickly made a vow to God that if He would give the Canaanites into their hands, they would “utterly destroy their cities.” God granted their request. When the king of Arad attacked, the Israelites destroyed them and renamed the city Hormah (Numbers 21:3).

From Hormah, the Israelites continued north to Moab about one hundred miles away. Along the way, the people began to grumble again.

“And the people spoke against God and Moses: ‘Why have you brought us up out of Egypt to die in the wilderness? For there is no food and no water, and our soul loathes this worthless bread.” Numbers 21:5-6

The people’s complaints angered God, so He sent fiery serpents to bite them. Many people died. After so much death, the people finally repented to Moses, who prayed on their behalf.

God forgave them once again, and in His mercy, He told Moses to make a bronze serpent and put it on a pole. If anyone were bit, all they needed to do was look at the bronze serpent, and they would be spared death.

The Israelites’ next several stops are quickly detailed in Numbers 21:10-20.

They traveled east and camped in the towns of Zalmonah, Punon, Oboth, Ije Abarim just east of Moab, then Dibon Gad, Almon Diblathaim, and the mountains of Abarim where they camped in the Valley of Zered (Wadi al-Hasa in Arabic) in present-day western Jordan. From there, they crossed the Arnon River. 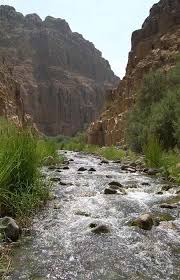 The Arnon River, or Wadi Mojib meaning “rushing torrent,” is a large tributary in the plateau of Moab that flows to the Red Sea. Its headwaters are north in the Gilead Mountains, east of the Dead Sea. Flowing through a canyon, the river itself is only forty yards wide, but the cliff height is about 1,700 feet deep. It would only take a brief swim to get across to camp on the river’s east side.

Camping by the Arnon River was an excellent spot to rest. The river is the boundary between Moab and its eastern neighbor, the Amorites. No battles were occurring here, and the cliffs offered shelter so they could rest in safety. The Bible does not tell us how long they camped there.

After leaving the Arnon River, the Israelites continued north through modern-day western Jordan, most likely along the King’s Highway. As the only north-south road, this highway was highly trafficked because it followed the ridgeline of the surrounding hills. Walking on the ridgeline made travel much easier since it was flatter at the top rather than attempting to navigate the rocky hillsides and valleys.

The highway led the Israelites to the towns of Mattanah, Nahaliel, Bamoth, and finally to Pisgah.

Pisgah was located just a bit northwest of Mount Nebo, still in Moabite (Jordanian) territory on the east side of the Dead Sea. It was another great place to camp. At the base of the hill were fresh springs for water, and it offered an extensive view to watch for enemies.

They were less than fifty miles from crossing the Jordan River and the Promised Land. After so many years, they were finally getting close. But as we see in Numbers 21:21, the Israelites rebelled again and decided to take yet another detour.

To the east of Pisgah lay Amorite territory. The Amorites controlled the area around the middle and upper Euphrates River in ancient Syria. The Israelites sent messengers to the king of the Amorites to ask for safe passage. The Bible does not tell us why they suddenly wanted to head east when the Promised Land was to the west. Nevertheless, this is what they did.

King Sihon of the Amorites would not grant safe passage and instead sent out his army to attack. The Israelites were victorious in defeating Sihon, and they took over the land. They also attacked the village of Jazer, driving all the Amorites out of the area.

Next, they traveled north to Bashan (modern-day Golan Heights). The area comprised of fertile pasture lands and thick forests and was quite prosperous. So, naturally, the king of Bashan, King Og, attacked the Israelites to protect his territory. But God told Moses not to worry; He had it all under control.

“Do not fear him, for I have delivered him into your hand, with all his people and his land; and you shall do to him as you did to Sihon king of the Amorites, who dwelt at Heshbon.” Numbers 21:34 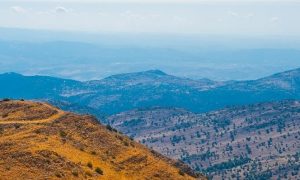 After defeating King Og, the people moved northwest to camp near the Jordan River directly east of Jericho. They were about a day’s walk from the Promised Land. The journey was again almost over. But the people again rebelled against God.

The men began sleeping with the women of Moab and Midian and bowing down to their gods. Their blatant insurrection infuriated God.

“Then the Lord said to Moses, ‘Take all the leaders of the people and hang the offenders before the Lord, out in the sun, that the fierce anger of the Lord may turn away from Israel.’” Numbers 25:4

Moses obeyed God and permitted the Israeli judges to kill anyone who worshipped the Moabite god, Baal. Soon after, Phinehas, Aaron’s grandson, saw one of the men bring a Midianite woman to the tabernacle of meeting. In a fury, he grabbed a javelin and ran them both through. Phinehas’ actions pleased God, causing His anger to stop. However, the punishment on the people had already begun.

God had sent another plague on the Israelites. By the time Phinehas used his javelin, twenty-four thousand people had died (Numbers 25:9).

Crossing the Jordan River would still have to wait.