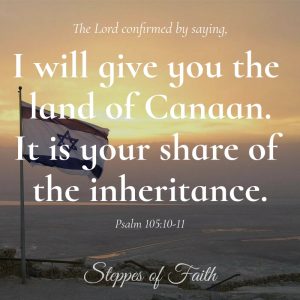 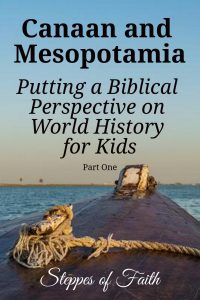 “He confirmed it as a law for Jacob, as an everlasting promise to Israel, by saying, ‘I will give you the land of Canaan. It is your share of the inheritance.’” Psalm 105:10-11

My middle school son is learning about Mesopotamia in his World History class. Remember Mesopotamia? It’s where the Tigris and Euphrates Rivers meet and the surrounding region. My son showed me a map of where Mesopotamia used to be, and we started talking about where it is today. I love overlaying what teachers say with what the Bible says, so I got out my Bible maps to show him.

Don’t you just love bringing the Bible alive for your children?

A Quick Review of Jacob and Esau

To understand why God chose Canaan to be the Promised Land, first we need to do a quick review of Jacob and Esau in the book of Genesis. Now, you’re probably wondering what Jacob and Esau have to do with the Canaanites. I assure you, it’s a lot. The effects of their relationship rippled for centuries, including today.

In Genesis 27, we read of Jacob stealing Esau’s blessing from their father, Isaac. It was after Jacob had already stolen Esau’s birthright, and Esau vowed revenge.

“So Esau hated Jacob because of the blessing with which his father blessed him, and Esau said in his heart, ‘The days of mourning for my father are at hand, then I will kill my brother, Jacob.’” Genesis 27:41

Their mother, Rebekah, sent Jacob away to her brother Laban’s house to escape Esau’s wrath while Esau took all that time to plot revenge. Later, we see the brothers reconciling in Genesis 33, but by then the damage was done, meaning the effects on future generations was already in motion.

Jacob went on to help father the Israelites, and Esau’s descendants largely made up (you guessed it!) the Canaanites. The land they occupied surrounded the Dead Sea on all sides except the south, straddled the Jordan River and extended all the way to the eastern edge of the Mediterranean Sea. 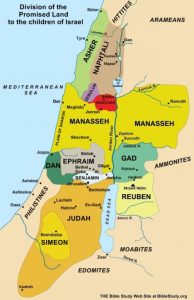 The Promised land in Canaan

The land was named Canaan after Noah’s grandson whose father was named Ham. Though Noah was an obedient man to God, it seems Ham wasn’t always a nice guy, and his typical teenager shenanigans sealed the fate of millions of people for centuries.

In Genesis 9:18-27 we read of Noah’s curse. Noah had passed out drunk in his tent and, in his sleep, revealed his nakedness. Ham found him naked and made a point to tell two of his brothers, which was highly embarrassing and disrespectful to Noah. When Noah woke up and found out what Ham did, he put a curse on Ham’s son, Canaan.

Eventually, Canaan and his brothers had sons of their own who claimed large swaths of land (including much of the Middle East area that continues to endure unrest and war today). Some of the cities you might recognize are Ninevah, Babel, Sodom, Gomorrah, as well as a group of cities where the Philistines originated called Phoenicia. Many people prospered in the land, but the curse was (and perhaps is) still in full effect.

What we should note, though, is the primary consequence of Ham’s teasing was Noah’s curse. It set up Canaan’s descendants for judgment of their sins and gave legitimacy to Israel’s later conquest of the land.

And sure enough, hundreds of years later, Moses and the Israelites reached the Jordan River where God told them to claim “the land of milk and honey.” According to Deuteronomy 7:1-5, the Israelites were to strictly follow God’s instructions about religious practices and to “utterly destroy” the seven nations who lived there.

The 7 Tribes of Canaan 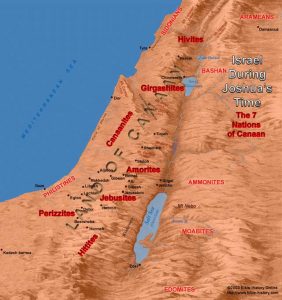 Locations of the seven Canaanite tribes

The seven tribes the Israelites were commanded to destroy were the Canaanites, Hittites, Girgashites, Amorites, Perizzites, Hivites, and the Jebusites. Let’s do a quick rundown of who these tribes were and why God wanted them wiped out.

Though all the tribes of the area made up the land of Canaan, the tribe God orders to be destroyed lived along the western edge of the Jordan River and extended west to the Mediterranean Sea. Genesis 36:20 says that one of Esau’s wives was a Canaanite of the Horite tribe, so perhaps Esau married into his fate.

In addition to the other six tribes mentioned here, the Canaanites also included some familiar folks you’ve read about in the Bible: the Moabites, Edomites, Ammonites, Arameans, and the Midianites.

The Hivites lived in the hilly region of Phoenicia, just north of the Canaanites. The Israelites eventually conquered and enslaved the Hivites and forced them to be water carriers and wood gatherers for God’s temple. Later, King Solomon used them as slaves in his building projects.

The Hivites banded together with other tribes and nations in rebellion to the Israelites, but the Lord made sure Joshua was victorious (Joshua 11:1-15).

The Hebrew meaning of Perizzites is “rural people.” They lived in the hilly forest country of central Israel and some parts of southern Israel. I haven’t any found any Biblical evidence about the history of the Perizzites, so they may have been just simple villagers from a blend of different backgrounds who assimilated into the Canaanite area.

But, what we do know is that some of the Perizzites who survived Joshua’s attacks were later enslaved by King Solomon (1 Kings 9:21).  Then, after the Israelites returned from captivity in Babylon, they found the Perizzites getting rather chummy with the Hebrew priests and marrying Hebrew women (Ezra 9:1-2). Their behavior upset the local leaders a lot. They considered it an abomination and they feared more of God’s judgment. So, they complained to the scribe-priest Ezra who was chronicling the rebuilding of God’s temple at the time and asked him to pray for their nation. (Ezra 9:5-15). 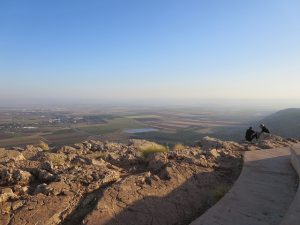 The countryside of central Israel

Like the Perizzites, little is known about the Jebusites other than that they may be a subgroup of the Amorite tribe. The Bible is the only text that is known to mention them. However, it’s believed the Jebusites lived in the mountains surrounding Jerusalem and in what is now southern Lebanon.

God chose to destroy the Jebusites because of their king worshipped the Hurrian goddess idol Hebat, but they must have put up a good fight because some of them escaped. Some continued to live in Jerusalem until King David finally ended their rebellion and formally established the City of David, also known as Zion (2 Samuel 5:6-7). 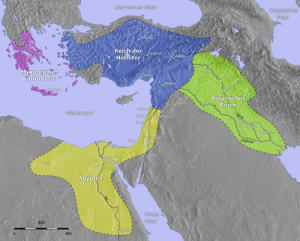 Until the Israelites came along, the Hittites had quite an empire going on. Their territory covered the entire northeastern coast of the Mediterranean Sea in what is now Turkey and included parts of Upper Mesopotamia, shown in purple on this map.

Though the Israelites conquered the Hittite empire, the two nations were never enemies. In fact, over time, they had an active trade policy, and some of the Hittite men served in the Israeli army. The most famous Hittite-Israeli soldier was Uriah, Bathsheba’s husband, who was considered one of King David’s “mighty men” (1 Chronicles 11:41).

Here again, not much is known about this Canaanite tribe other than their name comes from Gergesus, Noah’s great-grandson in Canaan’s lineage. They may have lived near the Sea of Galilee, according to archaeological findings.

What is known is they worshipped the pagan idols Baal and Ashtaroth, which included and promoted prostitution in the temple and forced children to walk through fire to prove their allegiance.

For many years, the nomadic, very powerful Amorites were largely considered backward and primitive. Their chiefs commonly forced their way onto other nations’ lands just so their herds could graze.

Eventually, the Amorites settled down and created a nation that occupied parts of Syria and northwestern Mesopotamia, which is part of modern-day Jordan and western Iraq. Their biggest claim to fame was turning a small, sleepy, relatively unknown town into a hub of power known as Babylon.

These are the seven Canaanite tribes the Israelites were commanded to conquer so they could claim the Promised Land. The land was divided it into twelve parts, one for each Hebrew tribe, but it was collectively called Israel. 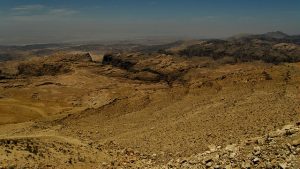 Land of Amorites in northwest Jordan

Where is Canaan Now?

If you look on a world map you won’t find Canaan anywhere, but some of its tribal people still exist. Next time, we’ll take a look at where these people are now, what happened to the rest, and how they are continuing to make an impact on Israel. Plus, we’ll talk about some practical ways you can help bring the Bible alive for your kids.

Let’s put World History in a Biblical perspective for our kids. It’s by studying Bible history that we can help our kids better understand who God is and why His love and grace are so amazing—and necessary. 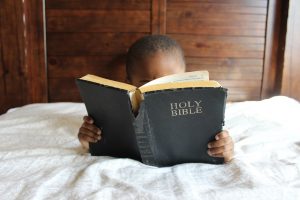 What do you know about the Canaanites? Are there any interesting historical facts you can share? I’d love to learn from you. Share your thoughts, comments, and knowledge below. The more we explore Bible history the better we can understand the character of God and grow our relationship with Him.