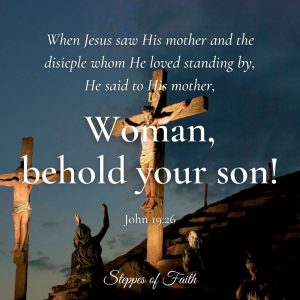 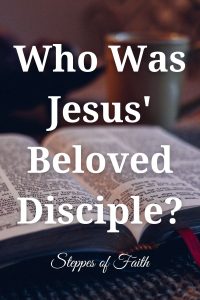 “When Jesus therefore saw His mother and the disciple whom He loved standing by,

In the book of John, we read six times about an anonymous figure interchangeably called “the one whom Jesus loved,” “the other disciple,” and “beloved disciple.” For years, scholars and laypeople alike have scratched their heads, wondering the identity of this person. Several theories exist. Some are plausible, and some are not. But if we look at Biblical text evidence, we can better determine who this mystery person might be.

The Book of John

Before we begin, we must try to figure out who wrote the book of John.

Church tradition holds the Beloved Disciple is John, son of Zebedee and brother of James. No proof exists of this belief since John never mentions his own name in the entire book (it’s important to note here the other three writers of the Gospels also do not mention their names). However, John does mention his name in Revelation 1:1.

The belief is that John purposely omitted his name from the Gospel book because his original audience already knew who wrote it. His authority within the early church, as well as events he personally witnessed, provided him great latitude to write a “spiritual gospel” that was highly accepted. So as the thought goes, in his humility, John intended for the reader to focus on Jesus and not on him.

It appears John could be the correct author of the book bearing his name. As a disciple and close friend of Jesus, he was present for many of Jesus’ most important ministerial moments.

So, John would have intimate knowledge of those events.

However, John was not present during Jesus’ trial before Annas, Caiaphas’ faither-in-law, though the author goes into great detail about what goes on inside the high priest’s house (John 18:12-23).

How would John know what truly happened? We could suppose the other unknown disciple who went with Peter to the high priest’s house in verse 15 may have told John about it, but we have no Biblical evidence of that.

Two Johns vs. One

Some scholars suggest John did not write both the Gospel book and the three New Testament letters bearing his name. The thought is the author of the book could have been an apprentice or someone acting as a final editor, and they did not change the book’s name.

Still, there is a shared terminology and style between the Gospel book and the three letters (though scholars consider the book less polished), which is why many consider the four books of the Bible all written by the same author. It is still possible that, if they are not all written by the same man, perhaps the two people were a part of the same community where they would share common traditions and understandings.

Other scholars also talk about a man named John the Elder, who some claim is the same person as John the apostle, but others do not. James McGrath, professor of New Testament Language and Literature at Butler University, states that second-century historian Papias, who worked hard to understand the sayings of key figures in the Bible, commented on John the apostle in the past tense while referring to John the Elder in the present tense, indicating there were two Johns.

To prove this point, note how the author refers to himself in 2John 1 and 3John 1, where he begins by calling himself “The Elder.” Such a distinction could mean either John “the apostle” eventually became “the elder,” or they are two different people.

Either way, the assertion is someone named John wrote the Gospel book, the three New Testament letters, and Revelation. 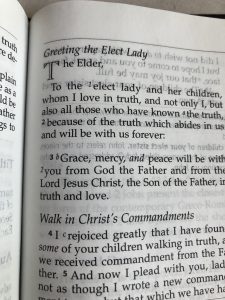 Evangelical Bible scholar Ben Witherington offers yet another possibility in a recent interview with Bible Study Magazine. Though some of his assertions do not make complete sense, he nevertheless comes up with one possible conclusion about who the Beloved Disciple is and who wrote the book of John. And it’s one many other scholars believe.

Witherington believes the author of the Gospel book isn’t John, but Lazarus. Yes, the same Lazarus Jesus raised from the dead. Witherington’s claim is John edited Lazarus’ book after Lazarus passed away. Again, we have no proof of this, but Witherington thinks it makes perfect sense and that it all points to who the real Beloved Disciple is.

We remember the story of Lazarus’ resurrection in John 11:1-44, where Lazarus’ sister, Mary, went to Jesus in verse three, saying, “Lord, behold, he whom You love is sick.” The instant conclusion is Lazarus is the famed Beloved Disciple.

The entire theme of the Bible is about love, especially in the book of John. The author goes to great lengths to teach the reader that anyone who obeys God’s commandments is His disciples, and He loves them all. So, we must ask if Witherington’s proclamation that Lazarus, the one whom Jesus loves, is the true Beloved Disciple? Or is it John? Maybe it’s both of them. Maybe it’s someone else altogether.

Simply trying to figure out who wrote the book of John does not fully answer our question of who the Beloved Disciple is. We must look at other pieces of Biblical evidence to find out more.

We know several things about the Beloved Disciple.

“From that hour that disciple took her to his own home.”

This verse indicates the disciple lived nearby and not in Galilee some 80 miles away. Further evidence of Mary staying near Jerusalem after Jesus’ death is found in Acts 1:14 when all the disciples are gathered (including Mary) in the upper room.

Several men could have fit the criteria. Excluding John, who was likely in hiding, other possibilities are two of Jesus’ “secret disciples,” Nicodemus and Joseph of Arimathea. As members of the Sanhedrin, they would have had homes near Jerusalem, they would have been present at Annas’ house, and they were not afraid of being arrested by the Romans.

The Beloved Disciple could also have been Thomas or Phillip, both of the original twelve, as some assert. But as one of the twelve, they would not have been present during Jesus’ crucifixion. Also, their homes were still in Galilee, like John’s.

So that leaves one compelling prospect—Lazarus. 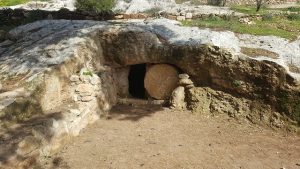 According to Witherington, Lazarus was the original author of the book of John. Not only does Mary refer to Lazarus as the one Jesus loves, but also Jesus proves His love by raising Lazarus from the dead four days later (remember, this is the only Scripture that says, “Jesus wept,” in John 11:35). Experiencing death and resurrection would have put Lazarus in the perfect position to understand what Jesus said about His own impending death and resurrection.

To back up this claim, Witherington refers to John 20 when Peter and “the other disciple” when they ran to see the empty tomb. While Peter is standing in the tomb trying to figure out what happened, “the other disciple” goes in. Instantly, he “saw and believed.” How? John 20:9 may be the possible answer.

“For as yet they did not know the Scripture, that He must rise again from the dead.”

The idea is “the other disciple” immediately understood what happened in the tomb because he had the same experience. John nor any other suggested men would have had the same insight and been so quick to believe. They “did not know the Scripture.”

Another point of evidence is where Lazarus lived. He and his sisters lived in Bethany, which was only two miles outside of Jerusalem. As mentioned, if Jesus gave his mother to His Beloved Disciple, that person must have had a home nearby. Further evidence indicates, as a Judean disciple, he would not have been afraid of arrest by the Romans.

So, the conclusion is “the other disciple” must be Lazarus.

But again, there is no Biblical proof.

Early historians Polycrates, Eusebius, and Irenaeus all agree the anonymous Beloved Disciple is John, son of Zebedee, and that he wrote the book of John, which is why church tradition is what it is. Yet, we cannot rule out the possibility of Lazarus being the more likely candidate.

Regardless, if God intended for us to know who this person was, He would have mentioned a name somewhere in the Gospels.

Perhaps God intentionally kept the Beloved Disciple anonymous so this character would fulfill a particular role in the Gospel story. And perhaps that role is God wants us to see how we all are His Beloved Disciple.

Every person who accepts Jesus as their Lord and Savior and follows Him, loves Him, and obeys Him is His disciple. And Jesus doesn’t parse out His love. There is no gradient scale. He loves us all the same with an everlasting love that was proven by His sacrificial death on the cross.

In the end, it doesn’t matter what the Beloved Disciple’s identity is in the book of John. What’s most important is that we recognize God’s unfailing love and that we can all be His Beloved Disciple if we desire it.