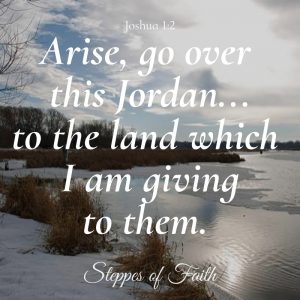 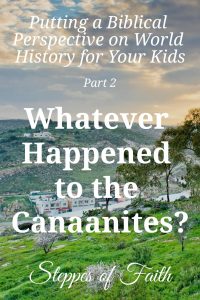 “Arise, go over this Jordan, you and all this people, to the land which I am giving to them—the children of Israel. Every place that the sole of your foot will tread upon I have given you…Be strong and of good courage, for to this people you shall divide as an inheritance the land which I swore to their fathers to give them.” Joshua 1:2-3,6

For centuries, the Canaanites have fought the Israelites, and their battle didn’t stop when Joshua claimed the Promised Land. It continues today against the seven Canaanite tribes and the surrounding Mesopotamia kings, presidents, and prime ministers.

Don’t think there are Canaanites and Mesopotamians anymore? Think again. They are indeed alive and well and still fighting with Israel. But, where are they? Who are they today? After this, your teenager is sure to get an A in World History class.

Though Canaan doesn’t formally exist anymore, some of the people continue to peacefully co-exist with the Jewish people.

But, why did any of them continue to exist when God had clearly commanded the Israelites to “utterly destroy” the seven Canaanite tribes? The answer is found in Judges 3.

“Now these are the nations which Yahweh left, to test Israel by them, even as many as had not known all the wars of Canaan; only that the generations of the children of Israel might know, to teach them war, at least those who knew nothing of it before: the five lords of the Philistines, all the Canaanites, the Sidonians, and the Hivites who lived on Mount Lebanon…. They were left to test Israel by them, to know whether they would listen to Yahweh’s commandments, which he commanded their fathers by Moses. The children of Israel lived among the Canaanites, the Hittites, the Amorites, the Perizzites, the Hivites, and the Jebusites. They took their daughters to be their wives and gave their own daughters to their sons and served their gods.” Judges 3:1-6 (WEB)

So, the Canaanites were preserved to continue testing the Israelites’ obedience to the Lord. If you’ve read the Old Testament, then you know the Israelites have historically struggled in this area. Consequently, they battled Canaanites and Mesopotamia kings for years, and things only got worse when they began marrying Canaanite women and worshipping pagan gods like Baal and Asherah among other evils.

Sure enough, the Israelites were forced to go to all-out war with the king of Mesopotamia, Cushan-Rishathaim. The king eventually took control of Israel for eight years until the Israelites finally came to their senses and called out to God for mercy.

“When the children of Israel cried out to the Lord, the Lord raised up a deliverer for [them]. Othniel, the son of Kenaz, Caleb’s younger brother. The Spirit of the Lord came upon him, and he judged Israel. He went out to war, and the Lord delivered Cushan-Rishathaim, king of Mesopotamia, into his hand.” Judges 3:9-10

It wasn’t until Othniel, Caleb’s younger brother and Israel’s first judge, came along that Israel was saved from Cushan-Rishathaim. Eventually, God raised up twelve other judges to save Israel’s continuing rebellion and stubbornness, that is until God had had enough. 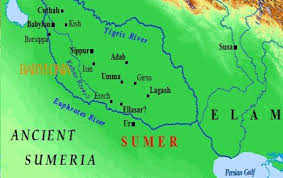 In 724 B.C., God allowed the Assyrians to conquer Israel, put an end to its southern kingdom of Judah, and begin the first mass relocation of the Jewish people back to Mesopotamia and as far east as Susa (modern-day Iran) where Esther would later take her stand.

The second mass relocation was to Babylon under King Nebuchadnezzar after he completely destroyed Jerusalem and the temple from 589-586 B.C. After his death in 562 B.C., the Israelites returned to their homeland, but their troubles were not yet over.

Even Jesus being in their very presence 550 years later was not enough for the Israelites to get their act together. It would be another 1,948 years before God made another move in keeping with His promise of a homeland.

Meanwhile, the Canaanites continued to fight amongst themselves for control of Mesopotamia. Empires rose and fell, from the Hittites to the Greeks and the Romans to the Ottomans, until the Middle East as we know it today finally took shape.

Canaanites and Israelites in the 20th Century

Moving into the 20th century, the Canaanites were still fighting. 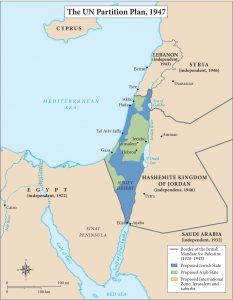 By 1929, some Israelites illegally moved into Canaanite Palestine to escape Adolf Hitler’s forces. The Palestinians were not very happy about this, of course. The British rulers in charge of Palestine were unable to help the Israelites, so they referred the issue to the United Nations.

The United Nations wanted to appease the British government, so the governing body voted to split the Palestinian land with the Israelites, which did not go over very well as you might imagine. The Palestinians (particularly the Arab Palestinians) rebelled but they were not successful. The Israelites claimed full control of the land in May 1948 and the nation of Israel was born.

But, the tribes of Canaanites still weren’t ready to give up. The next day after the Israeli nation was made official, forces from Egypt (Edomites), Transjordan (Ammonites), Syria (Hittites), Lebanon (Hivites), and Iraq (Amorites) invaded. The Israelites seized the Palestinian territory during the skirmish, then Israel was given full control of its land after the United Nations brokered a cease-fire.

Israel expanded its boundaries one more time during the Six Day War of 1967. They captured land (or they finally claimed more of the Promised Land) from historically Canaanite Jordan, Egypt, Syria, the Gaza Strip along the Mediterranean Sea, the West Bank along the Sea of Galilee, the Golan Heights of southern Syria, and the Sinai Peninsula (between Egypt and the Red Sea).

Israel and Egypt eventually signed a peace agreement. Israel returned the Sinai Peninsula (because it wasn’t historically within the Promised Land boundary as dictated in the book of Joshua) in exchange for recognition as a nation from Egypt as well as the other Canaanite countries.

Mesopotamia was finally at peace.

However, the Palestinians—the true Canaanites–continue trying to reach a peace agreement with Israel where the Palestinians would gain some control of Jerusalem. Of course, the Israelites aren’t about to agree to that, so the fighting goes on.

The Other Six Canaanite Tribes

As for the other ancient Canaanite tribes….

After the Hittite Empire defeated King Nebuchadnezzar, the Amorites dispersed across the area until the Aramean (Syrian) Empire permanently conquered them. Over time, the Arameans adopted Christianity and today many Israeli Christians come from the Arameans. Arameans are also found today in south-central Turkey, large portions of Syria, Germany, and Sweden. 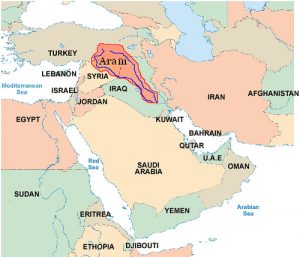 Eventually, the Assyrians conquered the mighty Hittites, but little Neo-Hittite kingdoms managed to survive in an area called Anatolia (modern-day Turkey) and northern Syria. Over time, even these kingdoms fell when a fresh, new Neo-Assyrian Empire invaded around circa 900-600 B.C., but many Hittite descendants are still in Syria and Turkey.

It’s not known if the Hivites, Girgashites, and Perizzites still exist, but it’s quite possible. They were likely absorbed into other nations causing their tribal names to be wiped away. But, I wouldn’t be surprised if some online genetics company found DNA evidence of their lineage somewhere in the region surrounding Israel and ancient Mesopotamia.

And the Jebusites…the book of Joshua says they still exist in Jerusalem today, and they’re still causing trouble.

Certain modern-day Palestinian leaders have argued that they are of Jebusite descent and so they have a historic claim to Jerusalem. They argue that their ancestors, the Jebusites, built Jerusalem, therefore it’s an Arab (Canaanite) city and the Jewish people have no right to it. This is the same conflict we keep hearing on the news right now regarding the Israeli-Palestinian Peace Accord. 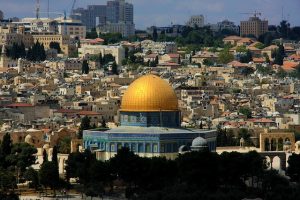 According to archaeological findings, however, there is no evidence that the Palestinians are in any way connected to the Jebusites and they are more likely linked to the Arabs of Saudi Arabia, Yemen, Jordan, and others. So, that means the Jewish people have a true claim to Jerusalem and all of Israel (Numbers 34:1-12) just as God said when He commanded them to claim the Promised Land thousands of years ago.

Hope for the Future

The Hebrews and the Canaanites continue their fight for the Promised Land to this day. Will it ever end? Yes, it will. 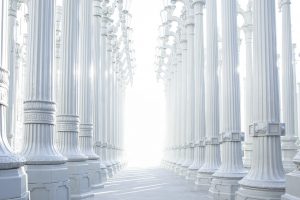 We know one day Jesus will return for His people and wipe sin away from the earth forever. Revelation 21 tells us Jesus will destroy Satan and He will create a new Jerusalem where the temple of God will be eternally preserved. It’s then the Israelites will be finally home and finally peaceful.

Now, I know what you’re thinking. All this information is simply amazing, but how in the world can you share it with your middle schooler?

Come back next week when I will share five easy ways you can bring your newfound knowledge to life with your kids. Best yet, some of them require no money. Not one penny! Don’t you just love free stuff?

Until then, challenge yourself to pay attention to the international news this week and see for yourself that the Canaanites are still alive and well in the world. You just might be surprised at what you see.

See you next time!

Got a question? Something you want to add? Your thoughts, questions, and kind comments are always welcome. Feel free to reach out to me any time.

If you missed Part 1 of this educational series about world history, you can view it right here. There’s lots of great information about who the seven tribes of Canaan were and why the Israelites were justified in taking their land for God.

And, if you’re curious enough, you can read an article from USA Today about how scientists figured out what happened to the Canaanites. There’s a cool little video too.

Neil Wilson and Nancy Ryken Taylor. The A to Z Guide to Bible Signs and Symbols. Baker Books. 2015.