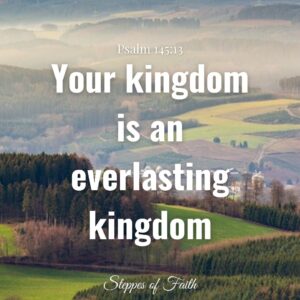 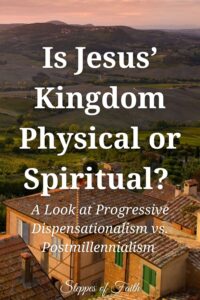 “Your kingdom is an everlasting kingdom.” Psalm 145:13

King David wrote many of the Psalms, including Psalm 110, where God announces the Messiah’s coming reign over a future kingdom. This poignant psalm is so popular that it is repeated five more times in the New Testament (Matthew 22:44; Mark 12:36; Luke 20:42-43; Acts 2:34-35; Hebrews 1:13). To understand God’s announcement, we must first understand what David is trying to convey.

Psalm 110 begins with David saying, “The LORD said to my Lord.” Any time we read a reference to the Lord in all uppercase letters, it refers to our heavenly Father. It is a name meant to emphasize His unique relationship with Israel.

We then notice David saying, “The LORD said to my Lord,” where He writes “Lord” in all lowercase letters. Many people believe God is speaking to David, but this is not so. When we read the Lord’s name in lowercase letters, it indicates the Son of God, our Lord Jesus Christ. David cannot be referring to himself because he is already a king. He is, instead, referring to an even greater king than himself.

To paraphrase, what David is saying here at the beginning of Psalm 110 can be rewritten as:

“Father God said to His Son, Jesus: Sit at My (the Father’s) right hand until I, the Father, make You (My Son’s) enemies a footstool to put under Your (My Son’s) feet.”

In other words, after Jesus ascended to heaven (Acts 2), Father God told Jesus to sit on His right side (a place of authority) and stay there until His enemies are defeated. Clearly, the Father has plans for His Son, one where Jesus reigns supreme as king over His kingdom.

Opinions differ about Jesus’ kingdom, whether it is already here or yet to come. They usually fall into one of two camps—progressive dispensationalism or Postmillennialism.

Some believe Jesus’ kingdom is already here, and He rules through the church both physically and spiritually. This doctrine is primarily known as progressive dispensationalism, and it is the more prominent idea in today’s churches.

In this opinion, the kingdom is in an incomplete form because more people still need to hear the gospel. It is up to the church to spread the Good News until everyone in every corner of the earth hears it. The earth will then enjoy an era of peace until Jesus returns and subdues Satan, and He destroys the heavens and the earth (2 Peter 3:10). Until then, we only get a sneak peek of the future complete (and physical) kingdom.

Progressive dispensationalists believe there will be a “golden age” of peace, while Postmillennialists believe the church will spread the gospel until Jesus returns. He will immediately judge the living and the dead, and eternity will begin. Such ideas are becoming more popular within the modern church.

Postmillennialists believe the kingdom is spiritual where God rules in our hearts and not an actual, physical kingdom. They also reject Revelation prophecy, believing it only refers to the followers of Christ who died during the Roman occupation.

Many elements of Postmillennialism are true, but its view of Jesus’ future kingdom as only spiritual is not, which is why it is considered false teaching. 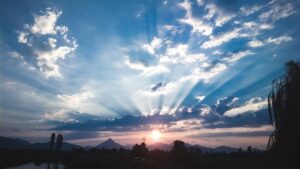 Postmillennialists often quote Luke 17:20-21 as evidence of their theology.

In this Scripture, the Pharisees believed Jesus could not possibly be the Messiah because He did not immediately destroy the Romans and set up His own empire. In response, Jesus tells the Pharisees the kingdom will come as the rule of God in people’s hearts through faith.

It is crucial to note that Jesus’ words are true. He does rule in our hearts. But they in no way negate Old Testament and Revelation prophecies that foretell a future kingdom. In Luke 17:20-21, Jesus only addressed the Pharisees’ lack of faith that He is the Son of God, and He will establish His physical kingdom one day.

The other argument for a spiritual-only kingdom is Romans 14:17.

“For the kingdom of God is not eating and drinking, but righteousness and peace and joy in the Holy Spirit.”

Postmillennialists believe this Scripture is saying the kingdom is all about righteousness, peace, and joy, which renders the kingdom purely spiritual and not physical. However, the apostle Paul is describing God’s law of love and how believers should treat others.

Paul was writing to the new Christian converts in Rome. He explains that eating and drinking, such as during certain Jewish rituals, are not pertinent to a proper Christian walk; however, righteousness, peace, and joy in the Holy Spirit are. These fruits of the Spirit become evident in our lives when we put our complete confidence in our sovereign God.

Though believers in Postmillennialism often quote Luke 17 and Romans 14 to support their argument, they take them out of context. When God rules in our hearts, our behaviors and attitudes of praise and thanksgiving to Him become abundantly evident to others. These Scriptures do not indicate a spiritual kingdom nor nullify the future existence of a physical one.

God will set up a physical kingdom one day, and we know exactly when it will happen. The answer is in Acts 3:19-21, where the apostle Peter gives his second sermon to the Jews.

“Repent, therefore, and be converted that your sins may be blotted out, so that times of refreshing may come from the presence of the Lord, that He may send Jesus Christ, who was preached to you before, whom heaven must receive until the times of restoration of all things, which God has spoken by the mouth of all His holy prophets since the world began.”

God promises to send His Son but only after the people repent. Though Peter is speaking specifically to the Jews who assisted the Pharisees in crucifying Jesus, his words apply to us today. Only from our repentance will God send Jesus, and “times of refreshing” will come.

Jesus also will not come until there is a “restoration of all things.” What does that time look like? The prophet Isaiah describes it like this:

“Now it shall come to pass in the latter days that the mountain of the LORD’s house shall be established on the top of the mountains and shall be exalted above the hills. And all nations shall flow to it. Many people shall come and say, ‘Come, let us go up to the mountain of the LORD, to the house of the God of Jacob. He will teach us His ways, and we shall walk in His paths.’ For out of Zion shall go forth the law and the word of the LORD from Jerusalem. He shall judge between nations and rebuke many people. They shall beat their swords into plowshares and their spears into pruning hooks. Nation shall not lift up sword against nation, neither shall they learn war anymore.” Isaiah 2:2-4

Isaiah prophesies that people will come far and wide to receive salvation until the Day of the Lord when He judges between good and evil. Upon conquering Satan, the Messianic era will begin, and Jesus will establish His physical millennial kingdom. Peace will cover the earth, and war will cease to exist.

Until this worldwide coming to faith in Christ occurs, Acts 3 tells us heaven will hold onto Jesus. His enemies have not yet become His footstool. But when they do, we can look forward to a great time of refreshing in the Lord.

One Reply to “Is Jesus’ Kingdom Physical or Spiritual? A Look at Progressive Dispensationalism vs. Postmillennialism”