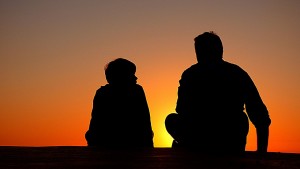 Even though Easter is over, think about this. God Himself made the cross for His own son to die on.

He thought it up and used it even knowing how many people who were not Jesus would die on it so tortuously, and long before Jesus would ever be born in Bethlehem.

How about Abraham? Imagine if you were him, called upon to sacrifice your only son because God told you to (Genesis 22:1-19). Could you do it? Abraham did. Was it easy for him? Of course not (and I bet not for Isaac either)!

Abraham loved his son, no doubt. But he loved God more. And because of that, Isaac was spared. But sparing  his son would only save his family, not the world.

God was willing to sacrifice His only son because of His undying love for us all so the whole world might be saved through the spreading of the Gospel.

Was God upset that He had to send His son to Earth to die? I think He was. He is a loving and caring God. Beyond His frustration over the Israelites continued disobedience, He loves his son very much, just like you do your children. And just like you, He doesn’t want to harm His own child.

But in this case, He had to and He knew He had no choice. The Israelites were doomed. He didn’t do this selfishly only to protect His own creation, His “stuff”. He did it because He knew Jesus could handle the assignment. And sure enough Jesus did…obediently and gracefully.

The Cross: Where Evil Was Turned to Good

Without knowing the prison system back then, I can only conclude that most of the people who were sentenced to die on a cross never tried to atone for their sins. They might have been ignoring Moses’ law and acting incredibly self-serving and prideful. Therefore, they had to die for their own sins. And if the sin was bad enough in the eyes of the community they were sentenced to hang from a cross, the worst of the ways to die. In the eyes of God, their sins would never be forgiven and their souls would actually be a million times more tortured than ever. They refused God, so God refused them.

Yes, the cross was used by extremely evil people. People who delighted in hurting others. In fact, I would bet that Satan thought at one point that God was finally on his side. And so hundreds of thousands died so brutally and shamefully from its design. But God made it for the good of the world so that His ultimate will and plan would be fulfilled. As He said in Romans 8:28,

“And we know that all things work together for good to those who love God, to those who are called according to His purpose.” NKJ

And, of course, the cross was for the salvation of the world as we know from John 3:16 (“For God so loved the world…”).

But here’s the thing. Those people didn’t have to die on crosses for their sins. They could have killed some sheep or rams or pigeons to atone for their sins. But they didn’t. For thousands of years they didn’t. Either they ignored God, or they felt that there was no way that they could ever satisfy God, so why bother (sound familiar?). Then because of their behavior, God fashioned a cross from an old tree so that His only (one and only ever) son would hang from it and pay sin’s price for us all- to die in our place, undeservedly. 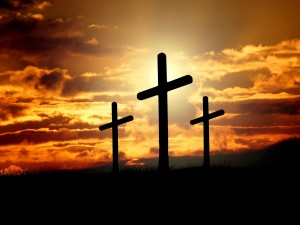 This is why the cross had to be made. It’s where the veil was torn and our personal relationship with the Father began. It’s where healing and forgiveness starts. The cross was necessary, and God made sure of it for own good.

From an old tree came scores of torture. But from that tree, love turned death into eternal life.

Lord, we thank you for the cross.