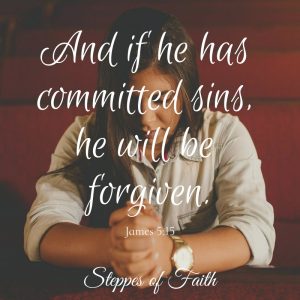 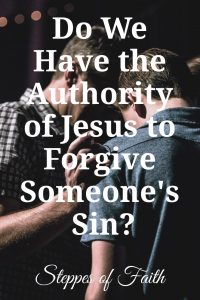 I love listening to our local Christian radio stations. The music is so uplifting and encouraging. I also sometimes like to listen to their replays of church sermons at lunch time every day. Recently, a speaker was talking about the authority Jesus gave His disciples after His first post-resurrection appearance. In a nutshell, his message was that because the disciples had the authority to heal people and forgive sins, we too in this modern era have the authority to forgive sins.

Now, I’m a huge opponent of false teaching as I’m sure you are, and the speaker’s message threw me off-kilter. The way he arrived at his conclusion was a bit dizzying. So, of course, I had to find out the truth and not just assume what I think I know. Remember that we are called to give a defense for the hope we have (1 Peter 3:15).

We’ll begin by looking at the books of Matthew and Mark.

The speaker on the radio began by establishing Jesus’ authority over…well, everything. We find this at the conclusion of the book of Matthew when Jesus gives the Great Commission.

“And Jesus came and spoke to them, saying, ‘All authority has been given to Me in heaven and on earth. Go, therefore, and make disciples of all the nations, baptizing them in the name of the Father and of the Son and of the Holy Spirit.’” Matthew 28:18-19

We see the Great Commission restated in the book of Mark.

“And He said to them, ‘Go into all the world and preach the gospel to every creature. He who believes and is baptized will be saved, but he who does not believe will be condemned.’” Mark 16:15-16

Early Christian philosophers and church leaders had their individual ideas about how Jesus could have such authority and be able to share it with the disciples.

In the third century, Sabellianism said the Father, Son, and Holy Spirit are three different aspects of God, that God is not a trinity, and the three persons of the trinity exist only in God’s relation to man. So, because God exists in three separate people, and He has a relationship with man, we share in His authority.

In the fourth century, Arianism taught that Jesus was a creature made by God just like us. Because He had authority, that must mean we too have authority.

And in the fifth century, Nestorianism taught that God had a divine nature and a human nature, and it was only the human nature that Mary gave birth to. They believed that since Jesus had two natures perhaps we all do. Therefore, we all have the same authority Jesus has.

Obviously, each of these religious philosophies is amazingly wrong, and the speaker on the radio agreed. But somehow, he continued to preach that it’s in the Great Commission where we gain true authority like Jesus. 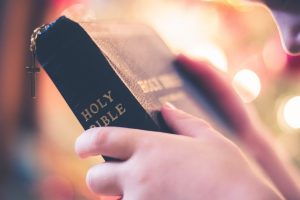 In Matthew 28:18, Jesus says, “All authority has been given to Me.” He then commands the disciples to go out, preach the Good News, and baptize those who believe. Let’s look at this step by step.

Who can they baptize? Those who believe.

What did someone do first after they believed in Jesus? They repented.

And, who did they confess their sins to? The disciples.

So, if someone believed in Jesus and confessed their sin to the disciples, that person could then be baptized. Which means the disciples must have had the authority to forgive sin.

Now, look at Mark 16:17-18. It’s where Jesus describes the signs of someone who believes Jesus is the Lord. They will…

The speaker on the radio concluded that because authority had been given to the disciples to heal others, cast out demons, etc., the people they baptized inherited the same authority. And since we are also believers of Jesus and the gospel, we too have the same authority. That means you and I have the power to take up serpents, heal the sick, and forgive sin.

The apostle James seems to back this idea up in James 5:15-16

“And the prayer of faith will save the sick, and the Lord will raise him up. And if he has committed sins, he will be forgiven. Confess your sins to one another, and pray for one another, that you may be healed. The effective, fervent prayer of a righteous man avails much.”

James indicates that by confessing our sin to someone else, we will be not only healed but forgiven. In other words, if we confess our sin to another believer, that person can forgive our sin because of the authority given to them through the Great Commission. This is not what James meant, but it is how some people interpret this verse.

It seems almost like a logical conclusion. That is until we back up to Matthew 10.

“And when [Jesus] had called His twelve disciples to Him, He gave them power over unclean spirits, to cast them out, and to heal all kinds of sickness and all kinds of disease.” Matthew 10:1

Long before He issued the Great Commission, before His crucifixion, Jesus had already given power to His new apostles. He did this to clearly show that He possessed all authority over everything, including sin. Now, let’s look at 2 Corinthians 12:12.

“Truly, the signs of an apostle were accomplished among you with all perseverance, in signs and wonders and mighty deeds.”

The apostle Paul is saying the purpose of the miraculous signs was to confirm the apostles as God’s messengers and no one else. Paul says this after he describes the different members of a church in 1 Corinthians 12:28-30.

“And God has appointed these in the church: first apostles, second prophets, third teachers, after that miracles, then gifts of healings, helps, administrations, varieties of tongues. Are all apostles? Are all prophets? Are all teachers? Are all workers of miracles? Do all have gifts of healings? Do all speak in tongues? Do all interpret?”

The answer to Paul’s series of questions is a resounding “no.” The body of Christ is diverse, each person with his or her own gift, and God purposely keeps it that way. That means not everyone is an apostle. In fact, only the apostles were ever apostles. Only they were ever given Jesus’ authority.

As for the signs and wonders we would see, they applied only to the apostles and not everyone throughout time because their authority came directly from Jesus. Indeed, some of the apostles did experience all the signs (except for drinking poison). We find evidence of that in Acts 28 when Paul finds himself shipwrecked on the island of Malta where he decides to build a fire.

“But when Paul had gathered a bundle of sticks and laid them on the fire, a viper came out because of the heat and fastened on his hand…But he shook off the creature into the fire and suffered no harm.” Acts 28:3,5 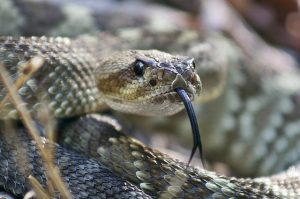 We also know no one has ever possessed the same authority as the apostles since their time of ministry.

“And they went out and preached everywhere, the Lord working with them and confirming the word through the accompanying signs.” Mark 16:20

Notice that this verse says the Lord was working with them. Not them and then Bill in 1875 and Susie in 1966 and David in 2019. The Lord was only working with them, the apostles, and there is no Biblical evidence that He has done it with anyone else since or ever intends to.

Only Jesus Has Authority

Since Jesus gave His authority to only the apostles, that means we don’t have any of it today. It also means we cannot forgive anyone’s sins. Someone can confess a sin to us, but we do not have the power to redeem it. They can pray the prayer of faith, and we can baptize them, but we do not have the authority to guarantee they will go to heaven. Only Jesus can do that through the power of His sacrificial blood on the cross and overwhelming grace.

It doesn’t mean we shouldn’t ever forgive others, of course. That is not what I’m saying here. We should always forgive as God forgives us. But that’s a personal kind of forgiveness and not of an eternal nature. That’s up for God alone to do.

As for authority, whatever we have is given to us only through the power of the Holy Spirit working through us. We have absolutely no authority on our own. It is the Holy Spirit who gives us power, strength, and wisdom to accomplish the things He needs us to do. He does this so only He receives the glory that comes from our work, and it’s well-deserving.

He alone deserves praise for the things we do.

I still love listening to sermons on the radio (any Moody Radio fans out there?), but let me give you a final word of caution. Most of the time, the speaker knows what he’s talking about. There are many priests and pastors you can trust to tell the truth of the Bible. But if you’re listening and something inside you makes you think that doesn’t sound right, take that as the Holy Spirit trying to get your attention. 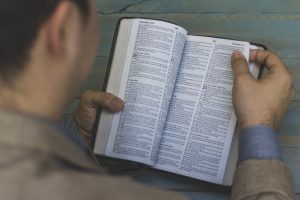 Grab your Bible and look up the verses for yourself. Do your own homework. Remember, just because someone is on the radio, in the pulpit, or on the internet doesn’t mean they’re a complete expert, including me (though I do my absolute best to give you the most accurate information).

Only God is the expert. He knows what He wrote in His word, so go to Him when you hear someone preach and it doesn’t seem quite on spot.

Jesus is the authority over everything. He alone can forgive sin, which is His heart’s desire. If you are seeking forgiveness today, won’t you turn to a loving Savior who gave His life to save you from eternal destruction? He’s waiting to share His love with you and give you new hope today.

16 Replies to “Do We Have the Authority of Jesus to Forgive Someone’s Sin?”