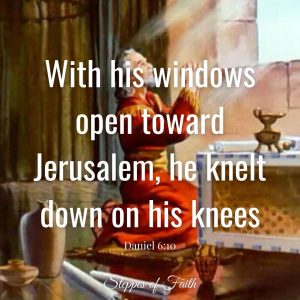 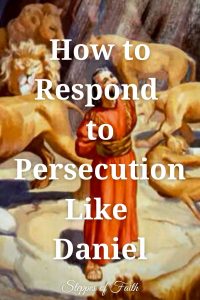 “With his windows open toward Jerusalem, he knelt down on his knees.” Daniel 6:10

In Daniel 6, King Darius set up a new system of government in which he placed Daniel in a very high position. As a result, the governors and satraps became very jealous of Daniel and plotted to kill him. When Daniel heard of their plot, he did something very unexpected. And in doing so, he teaches us the right way to respond to persecution.

Daniel had been a very loyal servant in the Babylonian kingdom ever since he was brought as a captive from Israel to Babylon as a teenager. Even later in his 80s, he continued to be steadfast in his work ethic. His obedience to the king was unwavering, but the most significant thing he did throughout the years was keep God in the center of his life no matter the circumstances. His faithfulness to God was always his top priority.

For example, in Daniel 1, Daniel refused to eat King Nebuchadnezzar’s food, which was considered unclean. And, in chapter three, he and his three friends refused to bow down to the king’s golden image, so the king threw them into a fiery furnace. All throughout the account of Daniel’s life in the Bible, we see that he routinely prayed three times a day with his window opened east toward Jerusalem.

Upon King Darius’ ascension to the Babylonian throne, the king immediately took note of Daniel’s dedication to God and steadfast loyalty to the kingdom “because an excellent spirit was in him (6:3).” His affection toward Daniel grew with time. And, by the time the king set up his new government system, he had placed higher esteem on Daniel than any other official, enough that he “gave thought to setting [Daniel] over the whole realm.”

The news did not sit well with the other kingdom officials.

Not long into his reign, King Darius divided the kingdom of Babylon into twenty provinces, each one overseen by ten satraps (“say-traps”). The satraps were usually members of royalty or Persian nobility. They were responsible for collecting taxes, internal security, and raising and maintaining an army. They were also the supreme judicial authority.

The satraps had to “give account” (Daniel 6:2) to three regional governors, who, in turn, reported to the king, though the satraps were also accountable to the king. To keep them in line, Darius set up a series of controls to quell any abuse of power, such as requiring the army to answer only to the king. Royal officials also conducted occasional inspections of the satrapies.

King Darius set up 200 satraps and three governors in all, including Daniel as one of the three governors. All of them (aside from Daniel, of course) hunted to find something wrong with Daniel. But every time they tried, they failed.

“So the governors and satraps sought to find some charge against Daniel concerning the kingdom, but they could find no charge or fault, for he was faithful, nor was there any error or fault found in him.” Daniel 6:4-5

The Bible does not tell us, but we might speculate the satraps and governors made it their mission to spy on Daniel physically, legally, and spiritually. For days if not weeks or months, they tried to catch him doing something, anything, wrong. But they never did. So, they schemed to create a new law that would surely snare him.

Daniel 6:6 says the governors and satraps “thronged” before Darius to present their idea. In other words, they packed in as tight as they could around the king’s throne. The Bible’s use of this word illustrates how intent they were to catch Daniel.

The law they created stated no one may worship any god or man except the king for thirty days. If the religious police caught anyone worshiping someone other than Darius, they had orders to throw that person into a den of lions. And, naturally, Darius was flattered to be solely worshiped.

So, without a thought about his friend Daniel, Darius signed the law into effect. 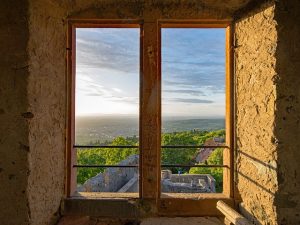 It did not take long for Daniel to hear the news, and his reaction was completely unexpected.

“Now, when Daniel knew that the writing was signed, he went home. And in his upper room, with his windows open toward Jerusalem, he knelt down on his knees three times that day, and prayed and gave thanks before his God, as was his custom since early days.” Daniel 6:10

Daniel went home to pray “as was his custom.” That is all he did. He did not hang his head and cry or go into an anxious rage. He simply got down on his knees and prayed. And notice he did not just pray; he also gave thanks to God. Even though he knew all the other kingdom officials were out to kill him, he still prayed and gave thanks.

The posture of Daniel’s heart is quite noteworthy here and a lesson for us all.

No matter what the situation might be, no matter how bad we think our circumstances are, our first response should be to pray and give thanks to God. But we should not simply bow our heads and pray. We need to get down on our knees.

The physical positioning of our bodies as we go before our holy God indicates our humility and our need for Him. That is not to say that bowing heads or even talking to God in the car or anywhere else is somehow unacceptable. That is not so. God wants to hear from us wherever we are at any time. But if we take the time to get on our knees to pray solemnly, it seems God leans in a bit closer to listen.

Renowned author and pastor Dr. Charles Stanley once said, “If you fight your battles on your knees, you’ll win every time.” That is how Daniel lived his entire life in Babylon. He got on his knees to pray three times a day every day. His faithfulness to God was rewarded by the Holy Spirit so that Daniel had “an excellent spirit (v3).” And everyone knew it.

Daniel’s godly lifestyle while living among non-believers and pagans is a beautiful example for all followers of Christ. We might prickle a few people, but, in the end, they will always know where we stand. More importantly, they will respect our conviction. And we see this response to Daniel in King Darius.

Caught in the Act

How exactly did the governors and satraps catch Daniel worshiping God?

Verse ten says he kept the same routine every day “since early days,” which means he opened his windows—rain or shine—every time he prayed. Even after the king signed the decree into law, they noticed his windows open at the same time every day. So, by simple observation, it could be the officials always knew when Daniel was praying.

Verse 11 says the officials “found Daniel praying.” How exactly they found him praying is unknown. One might use a bit of creative license here, but it could be they opened his door without knocking or just assumed he was praying because the windows were open.

Regardless, the governors and satraps finally caught Daniel doing something “wrong.” And again, Daniel did the unexpected: he did not deny the accusation at all. Throughout the ordeal, all the way to the lion’s den, he remained faithful to God. And for that, God rewarded him.

In verse 20, the morning after Daniel’s night in the den, the king rushed to the den and called out to him “with a lamenting voice.”

“Daniel, servant of the living God, has your God, whom you serve continually, been able to deliver you from the lions?” 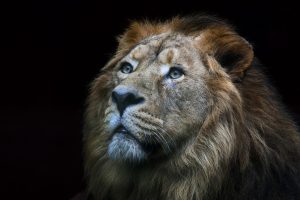 “Then Daniel said to the king, ‘O king, live forever! My God sent His angel and shut the lions’ mouths so that they have not hurt me because I was found innocent before Him.” (v22)

Because of Daniel’s faithfulness to God through the years and even as he endured persecution, God spared his life.

Notice the use of the word “found” in verse 22, which seems to indicate that while Daniel was in the lions’ den, God put him on trial. He judged Daniel while an angel shut the lions’ mouths, and He declared His servant innocent.

Daniel then finishes by saying, “And also, O king, I have done no wrong before you.”

It was settled. Daniel was innocent of all charges, both before God and the king.

God richly blessed Daniel not only for his obedience but also for his faithful service to the king. His hard work and integrity paid off, and it started early in his life when he decided to follow God no matter what happened. Even when his life was on the line, he got down on his knees and sought the Lord’s face.

When others persecute us for our faith or anything else, Daniel shows us the importance of remaining obedient to God, seeking His presence daily, and standing firm in our relationship with Him. We put all our hope and trust in the only one who is mighty to save—our sovereign Lord.

With a steadfast dedication to God and an upright spirit, may God declare us all innocent in His sight.

2 Replies to “How to Respond to Persecution Like Daniel”