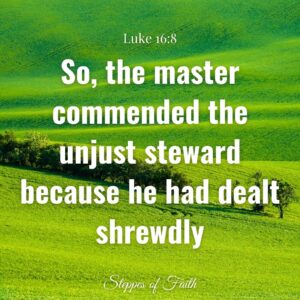 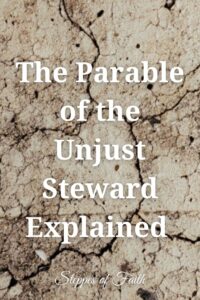 “So, the master commended the unjust steward because he had dealt shrewdly.” Luke 16:8

Jesus told many parables during His three years of ministry. While many are relatively simple to understand, some are more difficult. One such parable is of the unjust servant in Luke 16:1-13. Jesus tells it as part of a series of parables. Most notably, He tells it immediately after the parable of the prodigal son.

As you may remember, the prodigal son demanded his portion of his inheritance from his father, marched off to the big city, spent every dime, and ended up feeding pigs. Jesus then segues into telling the disciples the parable of the unjust servant.

In this story, a wealthy man hears that one of his servants is “wasting his goods” in the manner of the prodigal son. The rich man is so upset that he tells the servant he can no longer be his steward. In response, the servant, distraught and believing he is incapable of any other type of work, gives the rich man’s debtors a discount on their bills. When the rich man discovers what the servant did, he commends him for his shrewdness.

This parable does not make sense in many ways. Why would the rich man—the master—commend a servant who wasted his goods and then discounted others’ debts? The key to understanding Jesus’ story is that it is not about master and servant relationships. It is about how to handle money rightly.

The Bible does not call the man a servant but a steward, which is entirely different.

A servant has no rights, while a steward is more endeared. Usually, a steward is someone who was born and grew up in the master’s household. He was often in charge of the house and oversaw its affairs, including distributing food and clothing. Because of his managerial position, he was also entrusted with the master’s resources to buy and sell goods.

The master’s decision to remove the steward from his household position is understandable. Many people have been demoted or entirely fired for making poor decisions. Most would simply walk away and look for another job, but the steward thought otherwise. He knew he was either unable or unwilling to seek other work. He was also afraid of being kicked out of the master’s house, and he panicked. Where would he go?

That is when he devised a plan.

Knowing it was possible the master would throw him out of the house, the steward created a plan to ensure he had somewhere to go. In his last official act as steward, he called all those who owed the master money and discounted their debts.

“So, he called every one of his master’s debtors to him and said to the first, ‘How much do you owe my master?’ And he said, ‘A hundred measures of oil.’ So, he said to him, ‘Take your bill, and sit down quickly and write fifty.’” (v5)

Initially, the steward seems vengeful and seeks to swindle the master out of some of the money he owes, but this is not so. The steward is entirely looking out for his self-preservation.

He knew if he discounted the debts, the debtors would be more eager to pay. They would also feel indebted to him for his “generosity.” As a result, if the master threw him out of the house, the steward believed one of them would surely feel obligated to take him into their home. One way or the other, he would have a roof over his head.

Notice the steward tells the first debtor to “sit down quickly.” In this case, “quickly” indicates the steward is discounting the debts without the master’s knowledge and authority. The debtors are also guilty. They agreed to change their bills to the discounted amount, which means they were now equally complicit in defrauding the master.

Ironically, when the master discovers what is going on, he does not get upset as we might expect. Instead, he commends the steward. 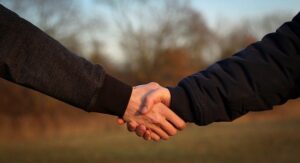 It does not make sense that the master would be pleased with the steward’s actions, but he is.

“So, the master commended the unjust steward because he had dealt shrewdly.” (v8)

The master realized the steward had outwitted him. Because he did not get angry, it shows the master was just as wicked as the steward. We might even suppose that the steward learned his shrewdness from the master himself.

Psalm 49:18 says, “Though while he lives, he blesses himself (For men will praise you when you do well for yourself).” Selfish and vain people will admire others when they outsmart the enemy. Such is the reaction of both the master and those who owed him money.

It is important to note that everyone in this parable is unjust. The steward, the master, and the debtors are all corrupt and dishonest. None of them have any sense of moral responsibility, and they all know how to get what they want. This is why Jesus says in verse eight, “For the sons of this world are more shrewd in their generation than the sons of light.”

The “sons of this world” refer to unbelievers. Jesus is saying they are often wiser in the ways of the world than the “sons of light (John 12:36)” are toward the ways of God. Sadly, this is often true.

Jesus’ comment in verse nine indicates He too commends the steward. He applauds the stewards’ proactive preparation for the judgment that awaited him and taking steps to secure his future.

“And I say to you, ‘Make friends for yourselves by unrighteous mammon [i.e., money], that when you fail, they may receive you into an everlasting home.” (my addition)

To be clear, Jesus is not condoning the steward’s dishonesty, and He does not encourage it in us either. His point is that we should be shrewd with our “goods”—not with temporary things as the steward but with eternal things. We should prepare for the day of judgment (Rev 11:18; Romans 14:10; 2 Cor 5:10; Ecc 12:14) and take steps to be ready for it.

The steward used his master’s money to buy worldly friends, but believers should use the money God grants to us to further the gospel and gain friends for eternity. The wealth we accumulate in this world is temporary. It is better to invest in God’s eternal kingdom instead and lay up our treasures in heaven (Matthew 6:20).

In verses nine through thirteen, Jesus goes on to explain two principles based on the parable of the unjust steward—faithfulness and service.

Jesus says those who can be faithful with little things can be trusted with more significant things. For believers, it means we are to be faithful with our money, sowing into the kingdom. Jesus encourages us to be honest with it, always exhibiting integrity if we want Him to trust us with eternal matters. If we do not, no one will ever trust us.

Jesus then makes His second point.

Jesus is warning us of the lure of money. It is important to note He does not condemn wealth. We need it to buy food, clothing, shelter, etc. But He cautions us not to fall in love with it. To do so is idol worship. And we cannot worship both God and money. Only God is worthy of worship (Exodus 20:3).

Believers are to serve God out of their love and obedience to Him and not because of a desire for wealth, which is what the Pharisees did (“Now the Pharisees, who were lovers of money… (Luke 16:14)”).

Those who love money more than God are merely seeking to be paid or get rich and not prioritizing God’s eternal kingdom. 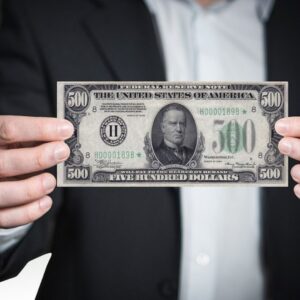 The Pharisees commonly equated wealth with divine blessing, i.e., rich people were more blessed than poor people. Jesus denounces this belief as well as the love of money and one’s devotion to seeking riches instead of Him.

“But those who desire to be rich fall into temptation and a snare and into many foolish and harmful lusts which drown men in destruction and perdition. For the love of money is a root of all kinds of evil, for which some have strayed from the faith in their greediness and pierced themselves through with many sorrows.” 1 Timothy 6:9-10

The love of money drives us away from God, which is why the apostle Paul instructs us this way:

“Let them do good, that they be rich in good works, ready to give, willing to share, storing up for themselves a good foundation for the time to come, that they may lay hold on eternal life.” (1 Timothy 6:18-19)

The way we handle our money is of great importance to God. We are not to “waste our goods” and manipulate others to our advantage like the unjust steward. It is more beneficial to handle our money honestly and sow it into the kingdom so we can help lead people to the truth of God’s grace. In doing so, we can better prepare for the coming kingdom.