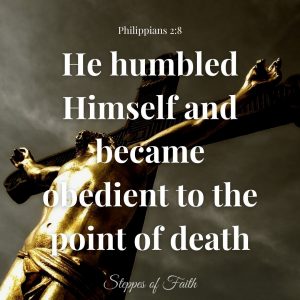 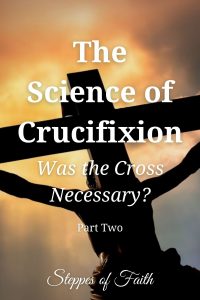 “He humbled Himself and became obedient to the point of death, even the death of the cross.” Philippians 2:8

Before Jesus carried His cross to Golgotha, He had already experienced incredible physical trauma and shock. It began in the Garden of Gethsemane when He sweated drops of blood and continued during His scourging at the hands of the Romans. He lost a lot of blood and fluids, His body was ripped and bruised by a flagram (a kind of cat-o-nine tails), He had excruciating, shooting pain from the crown of thorns forced into His head, and He was exhausted. He likely vomited, experienced seizures, fainted, and had difficulty breathing from a possible bruised lung.

By this point, many accused criminals did not survive, but Jesus did. But He still needed to make it to Calvary, and nothing was going to stop Him.

The Process of Crucifixion

After whipping and beating an accused criminal, the Romans would force the accused to carry the cross’s crossbeam (called the patibulum or antenna) to wherever they stationed the vertical shaft (called stipes or staticulum). Wood was quite scarce at the time, often requiring a journey of ten miles from Jerusalem to secure any lumber. So, the accused carried only the crossbeam while the stipes was repeatedly used and had a permanent location.

Once arriving at the stipes’ location, the Romans nailed the accused’s feet to it. Archaeological evidence concludes, in most cases, they only nailed the feet and not the hands to the cross. They usually placed the feet on either side of the shaft, not one foot on top of the other, as many believe. They also often placed a piece of wood on the outside of the ankle bones to hold the nails in place and prevent the accused from breaking free.

The crossbeam was placed behind the accused’s back with his arms draped over it. The Romans then secured the arms with ropes. No conclusive evidence so far suggests anyone other than Jesus had his hands nailed to the crossbeam.

Once everything was secure, guards hoisted the crossbeam to about seven feet from the ground and nailed it to the shaft. They then posted a sign over the accused’s head stating the man’s name and crime.

Jesus’ Journey to the Cross

“For dogs have surrounded Me. The congregation of the wicked has enclosed Me. They pierced My hand and My feet. I can count all My bones. They look and stare at Me. They divide My garments among them, and for My clothing they cast lots.” Psalm 22:16-18

When the soldiers finished whipping Jesus, they put His clothes back on Him and put His sign around His neck. They then tied His wrists to a 100-pound crossbeam and hoisted it onto His shoulders. They forced Him (with assistance from Simon the Cyrene, Matthew 27:32) to walk about one-third of a mile (about 365 meters) to a hill outside Jerusalem’s walls called Golgotha.

In full public view, the soldiers forced Jesus to lay on His back draped perpendicular to the crossbeam. As one soldier pressed on Jesus’ chest, another nailed His hands onto the crossbeam. According to Dr. Zugibe, the pain Jesus felt would have been like driving hot pokers into His hands, causing excruciating radiant pain up His arms.

People often debate whether the soldiers nailed Jesus’ hands or wrists to the crossbeam. Dr. Zugibe, a human anatomy professor, concludes the nails were in His hands within the area of the palms called the thenar furrow. The area is the soft, fleshy part at the base of the thumb. But this conclusion is difficult to believe since the human body, even one hanging on a cross, would be too heavy for the hands to support.

Most scholars agree the Romans drove the nails through His wrist, which was considered part of the hand at the time. Regardless, hand or wrist, the median nerve runs through the length of the arm from fingers to shoulder. Any irritation of this nerve causes a condition called causalgia, producing unbearable, searing pain.

“And as Moses lifted up the serpent in the wilderness, even so must the Son of Man be lifted up.” John 3:14

The soldiers then hoisted the crossbeam up the shaft to secure it into a notch located at the top. Such jostling would have intensified the pain Jesus was feeling, causing additional shock. It is likely His shoulder also dislocated.

Once the crossbeam was secure, the soldiers bent Jesus’ legs so His feet were flat with the shaft. It is uncertain whether His feet were side by side or placed one on top of the other. Regardless, both feet were nailed to the shaft, severing the plantar nerves. The pain was similar to what He felt in His hands.

To make things worse, Jesus’ bent legs would have caused cramping and numbness. The only relief would come from arching His back, but any movement would have sent more pain through His body.

Once He was fully attached to the cross, the sign was nailed over His head proclaiming His name and crime.

Such incredible pain from crucifixion would seemingly kill anyone. But for most victims, this was not true.

Some historians and scholars claim the main killer wasn’t pain but asphyxiation. A fixed position and weakening chest muscles would have only allowed shallow breaths causing a slow decrease in oxygen with a slow increase in carbon dioxide in the body.

Others say crucifixion likely causes a heart attack or perhaps pericarditis, an inflammation around the heart that causes fluid to fill the vacant space preventing the heart from beating properly. Another theory suggests cardiac rupture to be a likely killer.

The actual cause of Jesus’ death, however, according to Dr. W.D. Edwards in the Journal of American Medical Association, “may have been multifactorial and related primarily to hypovolemic shock, exhaustion asphyxia and perhaps acute heart failure.” He also states a fatal cardiac arrhythmia may have caused the final terminal event. Other numerous medical experts, including those from the Mayo Clinic, who have studied the effects of crucifixion on the body, agree with this conclusion.

Regardless of the cause of death, Jesus endured these torturous conditions for many hours. 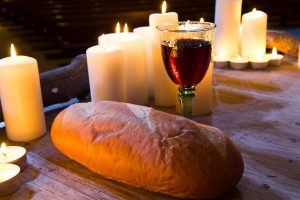 Ironically, the Jews had a custom of mixing sour wine with myrrh, a concoction that deadens one’s consciousness during their crucifixion. Matthew 27:34 says the soldiers offered Jesus such a mixture, but, after tasting it, He refused to drink it. Though horribly in pain and extremely thirsty, Jesus chose to keep His head as clear as possible. He wanted to face the cross head-on.

A few hours later, the Romans offered Jesus a second drink just before He gave up His spirit. This time, it was only sour wine (no myrrh), a fermented mixture of grape juice and yeast, which is a leavening agent. According to Holman’s Bible Dictionary, leavening was symbolic of sin. When Jesus drank it, He was symbolically taking the sins of the world into His body.

Another interesting note is how the Romans gave the sour wine to Jesus. The soldiers first soaked it up with a sponge then placed it on a hyssop plant (John 19:29). Hyssop was the same plant the Jews used for the first Passover in Exodus 12.

Moses told the people to sacrifice a lamb and paint its blood on their doorways so the angel of death would “pass over” their houses. Now, the final sacrificial Lamb’s blood would be applied to the cross to save people from their sins.

Broken Legs and Piercing His Side

Most crucifixion victims died after a few days, after which the soldiers would leave the bodies to rot until wild animals devoured them. To hasten the timing, the soldiers broke the victim’s legs with an iron mallet so they could no longer push up to catch a breath. With no way to breathe properly, suffocation came quickly.

However, Jesus’ crucifixion was different.

His execution occurred on the Day of Preparation, which is the day leading up to Passover which begins at sunset. Mosaic Law says no one can remain on a cross during a high holy day for fear God would curse the land. [READ MORE: Did Jesus Really Die on Good Friday?]

In this way, Jesus fulfilled an ancient prophecy found in Exodus 12:46, “Not one of His bones shall be broken.”

To confirm Jesus’ death, John 19:34 tells us a soldier cast his spear into Jesus’ side (likely His chest cavity). The piercing caused blood and water to flow out. Medical science supports this Scripture.

Because of the damaging effects of the flagrum, water would have filled the chest cavity around the lungs, causing a condition called pleural effusion. Blood also likely still filled one of the chambers on the right side of His heart. So, when the soldier pierced Jesus’ side, both blood and water came out. Once he removed it, His lung would have collapsed, causing the blood and water to stop flowing.

With the sun going down, it was only a short time later that Joseph of Arimathea arrived to take responsibility for Jesus’ body and lay it in his never-used-before garden tomb.

The Cross is Love

Crucifixion has many devastating effects on the human body. For Jesus, His experience was especially cruel. Some people might debate why Jesus willingly endured such torture. The answer is simple—love.

Jesus’ love for us is so outrageous, we cannot and will not ever fully understand it.

“‘For My thoughts are not your thoughts. Nor are your ways My ways,’ says the Lord.” Isaiah 55:8

Though incomprehensibly brutal, the cross was the perfect vehicle for the Son of God to bear our sins sufficiently. The Bible says our sins are like scarlet (Isaiah 1:18), but they are closer to being black. Sin is so dirty, vile, disgusting, and despicable a holy God cannot tolerate its presence. Everything Jesus experienced on the cross is evidence of what we deserve.

It is not Jesus who should have been crucified. It is us. 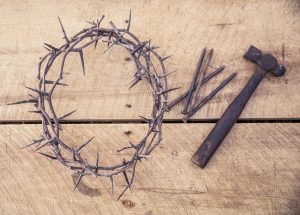 A Reflection of Hell

The viciousness of crucifixion—the physical and emotional pain and destruction, the anguish and torment of a slow death, the shame and humiliation—also reflects what is to come for those who reject Jesus’ gift of salvation.

Everything Jesus experienced on the cross is what awaits in hell for non-believers of the gospel. Victims of the cross die at some point. But those who willfully rebel against God will one day be made to endure brutality so incredible it will have no end (Luke 16:24).

The cross was perfect and, unfortunately, necessary. But the good news is it is also a gateway to justification before the Father.

Without the cross, without Jesus’ sacrifice, none of us would have the hope of heaven. The veil would not be torn, we would not have direct access to the Father’s throne room when we pray, and the gift of grace would not exist as we know it. We would continue to slaughter thousands of lambs, and we all would still be hoping and praying we performed well enough for God to accept us into heaven.

But Jesus changed all that.

Now, He has saved us by His grace alone. His atoning death on our behalf has made way for us to have eternal life with Him. The old is gone, and we are new creations in Him. No event in the history of the world has had such a dramatic effect on mankind as much as Jesus’ crucifixion.

Jesus paid it all. All to Him we owe.