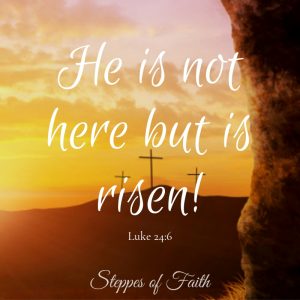 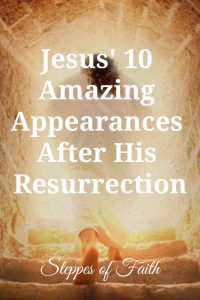 How was your Easter? Since all our relatives live very far away, my family and I enjoyed a wonderful day with close friends. After church, we stuffed ourselves silly with food and played games all evening. It was a beautiful celebration of Jesus’ resurrection.

I get the feeling that Jesus’ disciples experienced a very different Resurrection Sunday. After some of them watching our Lord die on the cross and the others hiding in fear and disbelief, the third day surely was confusing.

Stories were flying about Jesus. Some said He was alive again, some had seen Him, some had touched Him, some had eaten with Him, that He was in one place and then suddenly several miles away in a different place behind locked doors.

The truth is Jesus appeared to His disciples and followers ten times before His ascension, and it began right after His tomb was found empty.

Mary Magdalene and the Women

You no doubt remember how Mary Magdalene and two other women went to Jesus’ tomb early on that Sunday morning only to find the stone rolled away. One of my absolute favorite Bible verses is Luke 24:5-6 where the angel says to them, “Why do you seek the living among the dead? He is not here but is risen!”

The women must have been stunned. He is risen? Can you imagine their disbelief? It was too good to be true. Matthew 28:8 says “they went out quickly from the tomb with fear and great joy and ran to bring the disciples word.”

Fear and great joy both. Whatever their disbelief, it didn’t last long because they soon ran into Jesus Himself. The Gospels seem to have a varying account of this first meeting. Matthew says the women touched Him while John says they didn’t, and both Mark and Luke make no mention of the encounter at all.

Regardless, two different descriptions of this amazing first appearance clearly show that Jesus was indeed alive again and He had victoriously conquered the grave. 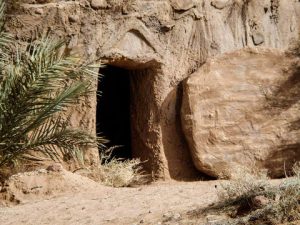 “But he said to them, ‘Do not be alarmed. You seek Jesus of Nazareth who was crucified. He is risen! He is not here. See the place where they laid Him. But go, tell His disciples—and Peter—that He is going before you into Galilee; there you will see Him, as He said to you.’” Mark 16:6-7

In Mark 16, Mary Magdalene goes back to the disciples to tell them she had seen Jesus alive again and that they need to go to Galilee. First, though, the disciples had to run back to the tomb to make sure she’s telling the truth, which she was. That’s when Matthew 28:16 says they immediately went to Galilee.

It’s interesting that Matthew and Mark are the only books to mention Jesus telling the disciples to go to Galilee. But apparently, they did go, and they found Jesus there just as He said He would be. Scholars speculate that Jesus told them to go to Galilee because that was where most of His followers were. It lines up with 1 Corinthians 15:6-7 where Paul describes a large gathering of disciples—

“After that, He was seen by over five hundred brethren at once.”

Jesus appears two more times the same day Mary Magdalene saw Him and after the gathering in Galilee.

First, in Luke 24:13-32 we read of two disciples traveling to a village called Emmaus. It was a little town about seven miles from Jerusalem. On their way to this town, they encountered someone who they thought was a man but was actually Jesus, but they didn’t know it. 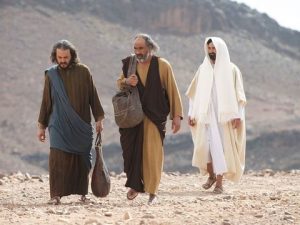 They walked and talked with the “man” about the events of the crucifixion and resurrection until they reached the town. By then it was late afternoon, and the disciples asked Him to stay for dinner.

They went inside where they were, and Jesus broke bread again and blessed it. It was then the disciples’ eyes were opened, and they realized who the stranger was. But then Luke 24:32 says, “He vanished from their sight.”

The disciples were left aghast at what they had just experienced.

We can assume immediately after that Jesus appeared to the rest of the disciples except for Thomas. Remember, before it was late afternoon. Now, according to John 20:19, it was evening time, and the disciples were gathered together behind closed doors because they were afraid of the Jews’ persecution of them (remember how Peter was badgered around the fire the night he denied Jesus three times?).

Suddenly, Jesus appeared out of nowhere right in their midst saying, “Peace be with you.” He showed them His hands and feet, and the disciples were overjoyed to see Him. It’s important to note that this was the night the Holy Spirit is first given to anyone. It did not happen at Pentecost as most people believe, which was the day Jesus ascended to heaven. 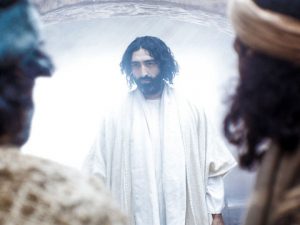 He then asked them for something to eat to further prove He truly was alive.

Breakfast at the Beach

By now, Jesus had visited His disciples four times. The fifth time was on the eighth day after His resurrection. In John 21, Jesus decides to visit seven of His disciples at the Sea of Tiberias while they were fishing one morning.

This is another famous moment when Jesus (in disguise again) asks His friends if they’ve caught any fish. As you recall, they answered, “No.” So, Jesus tells them to “cast the net on the right side of the boat, and you will find some.”

The Bible doesn’t tell us exactly how long the disciples had been fishing, whether they were frustrated and exhausted from not having caught anything, though many pastors and teachers have suspected they were. Still, they obeyed the man on the beach and cast their nets to find the nets overflowing with “the multitude of fish (v5).” It’s only after their huge catch (153 fish, in fact, in verse 11) is hauled in that John recognizes that it’s Jesus who was the strange man.

Jesus invites them to eat breakfast with Him, and it was right after that Jesus takes Peter aside and tells him to feed His sheep. Jesus says this to Peter three times in response to Peter’s denial of the Lord three times the night of His crucifixion.

In the end, everyone learns that Jesus has appointed Peter to be the pastor of the new church.

The Evening of the Eighth Day

Thomas had not yet seen Jesus alive again though he had doubtless heard all about it from the other disciples. That was about to change. We find the only account of Jesus’ appearance to Thomas in John 20:26-29. 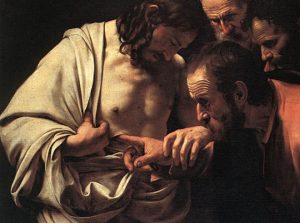 After having breakfast with some of the disciples at the beach that morning, Jesus again mysteriously appears in the middle of the shut upper room later that evening, and He tells Thomas to touch His scarred hands and His side. It’s then Thomas finally believes the truth that Jesus is truly alive, and Jesus famously says, “Because you have seen Me, you have believed. Blessed are those who have not seen and yet have believed.”

A lesson for us all.

The Gospels don’t specifically mention Jesus appearing to His half-brother, James, privately. But we know at some point He met with him sometime before the disciples went to Galilee as was mentioned earlier. The only comment of it is found in 1 Corinthians 15:7 where Paul writes, “After that, He was seen by James, then by all the apostles,” which suggests Jesus made a stop at home in Nazareth before He went to Galilee.

This is an important meeting because that was when James was finally convinced that Jesus, his big brother, is the Son of God. James completely devotes the rest of his life to leading the early church alongside Peter. In fact, James came to be known as the lead pastor of the Jerusalem church (Acts 15:13). He became very influential and powerful, so much he was killed for it.

Paul continues in 1 Corinthians 15:7, “Then last of all, He was seen by me also as by one born out of due time.”

“Born out of due time” is a reference to Jesus personally appointing Paul as an apostle. Paul was fully aware of how special his appointment was. Immediately following in verses nine and ten, Paul humbly writes,

“For I am the least of the apostles, who am not worthy to be called an apostle because I persecuted the church of God. But by the grace of God, I am what I am, and His grace toward me was not in vain.”

Aside from His meeting with Paul, Jesus’ only other appearance is when He ascended to heaven in Acts 1:3-11. He gathered His disciples together to tell them not to leave Jerusalem but wait for the Holy Spirit. Remember they had already received the gift of the Holy Spirit, but now they were to wait for the Spirit to baptize them.

Jesus tells them they will receive power from the Holy Spirit, then He commissions them to be witnesses of Him “to the end of the earth (v8).” 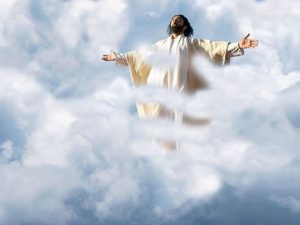 Immediately after He said this, Jesus ascended to heaven as everyone watched, and two angels appeared with good news.

“He was taken up, and a cloud received Him out of their sight. And while they looked steadfastly toward heaven as He went up, behold, two men stood by them in white apparel who also said, ‘Men of Galilee, why do you stand gazing up into heaven? This same Jesus, who was taken up from you into heaven, will so come in like manner as you saw Him go into heaven (v 9-11).”

Jesus longs to be with us. He desires an eternal relationship with us. His perpetual appearances after His resurrection prove it.

His death and resurrection weren’t going to keep Him from the ones He loves. It didn’t stop Him then, and it doesn’t stop Him now. His faithfulness is unending, His love is beyond any measurement, and one day He’s coming again to take us home to heaven so we can be with Him forever.

How about you? Have you seen Jesus lately? Do you have a relationship with Him? He’s waiting for you. He stands at the door of your heart knocking, waiting to see you.

Will you let Him in? 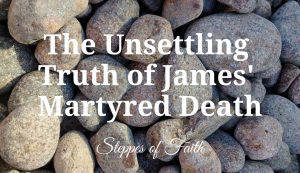 It’s wonderful that James finally saw the truth of who Jesus is. He went on to do great things in the early church and bringing many others to Jesus’ saving grace. Unfortunately, the Pharisees didn’t see it as something very good. In The Unsettling Truth of James’ Martyred Death, learn what ultimately happened to James and the legacy he left behind for us all.

9 Replies to “Jesus’ 10 Amazing Appearances After His Resurrection” 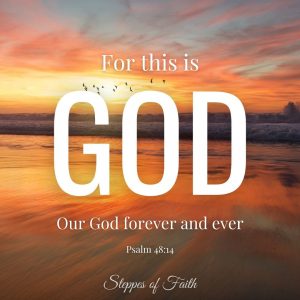