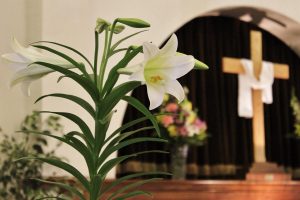 “Hosanna to the Son of David! Blessed is He who comes in the name of the Lord! Hosanna in the highest!” Matthew 21:9 NKJ

For many of us, spring has sprung. Time for longer days, some spring cleaning, and thoughts of wearing shorts and flip-flops again. For Christians, it’s also a time to put our focus back on Jesus as we prepare for Easter.

The approach of Easter brings more depictions of the cross and the empty tomb, and Jesus’ hands with holes in them, and we hear our pastors speak more about Jesus’ sacrifice, salvation, resurrection, and eternal life. They are all important reminders, and they’re good to introduce to non-believers. Imperative even. Yet there’s something missing from it all. There’s a gap in the message.

While we hone in on Jesus’ last three days on earth, we often overlook the previous weekend.

Whatever Happened to Palm Sunday?

Can I take a moment to vent a little? I know every church is different, and yours may not be like what I’m describing here, but recently I’m seeing less and less mention of some pretty important moments in Biblical history. By important moments, I mean not only Jesus’ birth and death but also His final entry into Jerusalem (Palm Sunday) and the promised gift of the Holy Spirit (Day of Pentecost). It would seem our church leaders are so busy either maintaining the congregation or planning for the pageantry of Christmas and Easter that Palm Sunday and Pentecost often get the brush-off.

Now, I’m not trying to criticize any churches that do this, but what I’m noticing is that fewer of them are taking the time to teach the people of God the why’s and what’s of the Bible. For example, why do we tithe? Why was Zacchaeus in a sycamore tree and not an elm or oak tree? What was the significance of the father running toward his prodigal son? Why did it matter that the woman at the well was Samarian? Sadly, very little theology and few details are being taught anymore.

So, here we are coming up on Easter again, and I have yet to hear anyone or any church bring up the importance of Palm Sunday. If your church is still talking about it, consider yourself blessed. It’s a very important time in Jesus’ life.

Big Crowds and Plots of Death

Most Christians have heard or read about Jesus entering Jerusalem riding on a donkey while the people threw palm branches down on the ground in front of Him and yelled, “Hosanna!” This special day is what we now call Palm Sunday. But why was it so special?

Let’s pick up the story six days before Passover. For the past several weeks, Jesus and His disciples had been making their way to Jerusalem to celebrate Passover, just like thousands of Jews were doing. Along the way Jesus had healed a blind man, cleansed ten lepers, met Zacchaeus, and told a lot of parables. He was a busy guy. And He was attracting a lot of attention.

His last stop had been at the house of His very good friends, Mary, Martha, and Lazarus. They lived in a small town called Bethany, which was several miles outside of Jerusalem. Jesus didn’t go all the way to Jerusalem because He knew that the Pharisees were looking to kill Him, so He stayed a safe distance away because it was not yet time for Him to die.

As wonderful as it was to hang out with His closest friends, Jesus was still being followed by massive crowds everywhere He went. When the crowd heard that He was going to Lazarus’ house, it drew even more people because they all wanted to see the guy who Jesus had raised back to life. Apparently, Lazarus had become a sort of roadside attraction, not only to the crowd but also to the chief priests, who had thoughts of murder on their minds. John 12:10 tells us,

“But the chief priests plotted to put Lazarus to death also because, on account of him, many of the Jews went away and believed in Jesus.”

Fortunately, the plot was short-lived.

The next morning was Sunday, what we now call Palm Sunday, and it began with a series of prophecies becoming fulfilled. The first two happened that same day.

The day’s date fulfilled the first prophecy. The date was 9 Nisan, A.D. 30. It was exactly 483 years, or seventy weeks (as calculated in a very complicated way), after the Persian King Artaxerxes decreed that Jerusalem would be rebuilt. The time spans from this decree to the establishment of the Messiah’s kingdom, which occurred when Jesus entered Jerusalem on Palm Sunday. This fulfilled a prophecy given years before by the angel Gabriel in the book of Daniel that said it would be seventy weeks before the Messiah would come.

The prophecy from Daniel 9:24 is a little difficult to understand, so I’ve added some clarification here. Some of it includes elements of what to expect in the final days before Jesus’ second coming.

“Seventy weeks are determined for your people and for your holy city, to finish the transgression (restrain sin), to make an end of sins (to judge sin with decisiveness), to make reconciliation for iniquity (atonement of sin, which is Jesus dying on the cross for us), to bring in everlasting righteousness, to seal up vision and prophecy (there will be no more prophecies given concerning the last days), and to anoint the Most Holy (the new Jerusalem).” 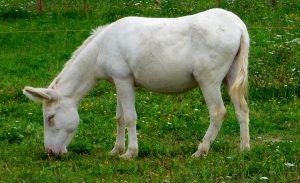 How Jesus traveled the last few miles to Jerusalem fulfilled the second prophecy. Instead of walking there, Jesus sent two of His disciples to a nearby village to get a donkey colt that was tied up near the entrance to the village. The book of Luke says there was only the colt standing there, but the book of Matthew says there was also a mare which was perhaps the colt’s mother. They took the mare so that the colt would be more cooperative.

The colt fulfills a prophecy from Zechariah 9:9 that says,

“Rejoice greatly, O daughter of Zion! Shout, O daughter of Jerusalem! Behold, your King is coming to you; He is just and having salvation, lowly, and sitting on a donkey, a colt, the foal of a donkey.”

What’s also significant about choosing a donkey is that it’s such a humble animal, not big and majestic like a horse. Members of royalty and the military used horses. Jesus, as a humble servant of the Father, chose an animal that matched his attitude and spirit. You can be assured that his choice of animal wasn’t lost on the people there that Sunday. Indeed, it spoke volumes.

After the disciples brought the colt and mare to Jesus, they threw their clothes over the colt before Jesus sat on it. Others from the crowd also threw their clothes, plus palm branches, on the ground for the donkey to walk over. Putting your clothes on the ground was a very old custom of the time that was reserved for only high royalty such as kings, which means the people were already recognizing Jesus as King of the Jews.

The crowd’s recognition of Jesus as the Messiah is also clear in Matthew 21:9 when they cried out,

“Hosanna to the Son of David! Blessed is He who comes in the name of the Lord! Hosanna in the highest!”

In both verses, the people are quoting directly from Psalm 118:26 which says, “Blessed is He who comes in the name of the Lord.” The phrase was sung regularly at Jewish religious festivals and especially at Passover, so it was extremely well known.

The verse in Mark indicates that the crowd is acknowledging Jesus as the One who is fulfilling the prophecy of bringing in the Messianic kingdom promised to David’s Son, and that meant that Jesus obviously had the support of both the Jews as well as a group of Greek converts.

So, of course, that only made the Pharisees even angrier.

A Misunderstanding of Jesus

At this point, if you’re a Jew, you’re thinking that God has finally answered your prayers and sent the one man who was promised to deliver the Israelites from the clutches of evil forever.

Well, they were sort of right, but not really.

God had, indeed, come to deliver the Israelites, but not from what the Jews thought. They were expecting a king to come who would overthrow the Roman Empire and re-establish the autonomy of their nation, which is why they were yelling, “Hosanna,” which means “save us.”

They got a king, for sure, but not the kind of king they had in mind. In those days, kings were often highly ranked in the military, which means the Jews were expecting a general, one who would wage war and triumph over the evil Romans. What they didn’t understand was that Jesus had come to triumph over a greater enemy- sin and death- as the King of All Kings.

This huge misunderstanding may be one of the reasons why some members of the crowd turned on Jesus when they were presented the choice of killing either Him or Barabbas. The general they wanted hadn’t shown up. He wasn’t the guy they were waiting for. In their minds, He was a fraud, and they had been let down.

But on that Palm Sunday when Jesus came into Jerusalem for the last time, those who had been following Jesus all the way from Galilee knew that He was someone very special. He was someone who would change the world forever. And a few of them believed in Him enough that they followed Him all the way the cross.

In Between Palm Sunday and Good Friday

Of course, there is more to learn about Jesus in those days between Palm Sunday and Good Friday. Much more happened such as:

And more prophecy was fulfilled during this week. The primary ones occurred when Jesus was on the cross including:

Including how Jesus was pierced and wounded, Isaiah 53 foretold His ministry and endurance of the cross in its entirety. I highly encourage you to read this chapter now that it’s Palm Sunday and Easter time.

It was a busy, anxious week, for sure. But Jesus was faithful to His mission to redeem the lost and give His body as an atoning sacrifice for our sins so that we could experience the power of His grace. 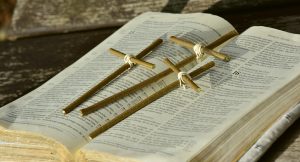 You Were Always on His Mind

When you go to church this weekend, take the time to remember all the significance of Jesus’ final days on earth and how it began on that fateful Palm Sunday. Even if your pastor or minister fails to mention anything about it, make a purposeful effort to remember the Lord, because He was thinking of you that day.

And He still is.

Pastor Max Lucado is a brilliant evangelist and storyteller. He’s written many books about Jesus and His final days, both for adults and children. One of his best-sellers is “He Chose the Nails.” I highly recommend it for those of you wanting to take a closer look at Jesus’ gifts from the cross. You can learn more about it at Christianbook.

You can also check out why I think Easter is more important than Christmas here.