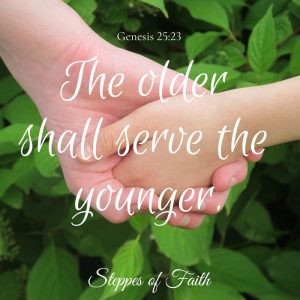 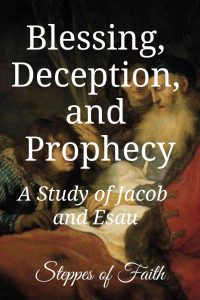 “The older shall serve the younger.” Genesis 25:23

Being a mother of twins can be very challenging sometimes. Some days are better than others. One is a perfect angel while the other creates havoc all day long. It’s hard not to show favoritism some days.

Many people have wondered if Rebekah was playing favorites when she helped her son, Jacob, trick her husband, Isaac, into giving Esau’s blessing to Jacob in Genesis 27. You might recall how she convinced Jacob to cover his body in goat fur and pretend to be his brother. And, this was after he tricked Esau out of his birthright a few chapters before in Genesis 25.

Jacob appears to be a cunning and conniving guy who is not always honest. Rebekah doesn’t seem to be much better. And poor Esau! He seems to have gotten the short end of the stick.

Why did Jacob deceive his twin brother not once but twice? What was it about him that Rebekah felt compelled to make sure he got Esau’s blessing?

I thought this story was just about favoritism, poor parenting, and deception, but when I dug into it, I found a whole lot I didn’t expect. It was more than that. There was also the fulfilling of prophecy and how a blessing is unique to each of us.

It is very important to remember how different Jacob and Esau were. Just because they were twins didn’t make them alike in any way (trust me on that).

The Bible describes Jacob as a mild man, a tent dweller (Heb: Yoshev Ohelim) who enjoyed intellectual and spiritual activities. Esau (Heb: Esav, ʿEsaw) was a hunter and great outdoorsman. Jacob had smooth skin, and Esau was hairy all over his body.

We see Isaac and Rebekah’s difference of opinion about their boys in Genesis 25:28: 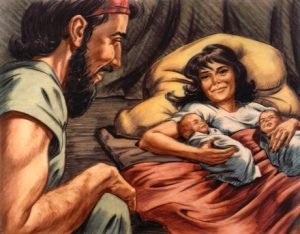 “And Isaac loved Esau because he ate of his game, but Rebekah loved Jacob.”

Rabbinic literature often depicts Esau as being wicked. He was given the nickname Edom, which eventually became a nickname for anyone thought of as wicked and evil. And, if the name Edom sounds familiar, it’s because he became the ancestor of the nation Edom where modern-day southern Jordan and later southern Israel are.

From the beginning, Jacob and Esau couldn’t be more different.

The first question most people ask is if Jacob was right to take Esau’s birthright and blessing. It seemed like highway robbery, didn’t it?

Let’s go back to the prophecy given to Rebekah in Genesis 25:22-23 before the boys were born.

“But the children struggled together within her, and she said, ‘If all is well, why am I like this?’ And the Lord said to her:

‘Two nations are in your womb,

Two peoples shall be separated from your body.

One people shall be stronger than the other,

And the older shall serve the younger.’”

The key phrase here in the prophecy that most people point to is “the older shall serve the younger.” That makes it sound like Esau should serve Jacob, doesn’t it?

Now, let’s fast forward back to when Jacob tricked Isaac into giving him Esau’s blessing in Genesis 27. Here we find Isaac gravely ill and bed-ridden. He has commanded Esau to go out and hunt for food then bring it home for him to eat because it might be his last meal. Rebekah overhears this conversation and waits for Esau to leave.

While Esau is out hunting, Rebekah commands Jacob to get two goats. She cooks the goat meat and sews the skins onto some of Esau’s clothes. She also puts goat skin on Jacob’s hands and neck. After she’s finished, she tells Jacob to quickly put on the clothes and take the meat she to Isaac so he could get Isaac’s blessing, which he got.

Then Esau comes home and brings his catch to Isaac so he could be blessed only to find that his father had already blessed someone else. Esau cries out in anguish, “Bless me—me also, O my father! Have you only one blessing, my father? (Genesis 27:34)”

You can almost hear his despair, can’t you? It seems so cruel what Jacob did.

Though it seemed that Rebekah was showing favoritism to Jacob, that she was an evil mother and wife, and though Jacob seemed not much better, what they did was in actual keeping with God’s prophecy.

Rebekah knew her sons very well. And she remembered the Lord’s prophecy. She knew Esau was an emotional, temperamental guy, perhaps even a bit impulsive. He was so impulsive that he allowed Jacob to have his birthright in exchange for a simple bowl of soup (Genesis 25:29-34). 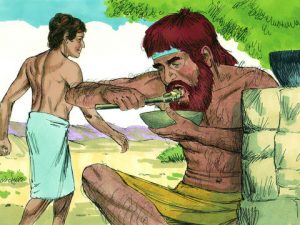 Esau had clearly forgotten that, as the older brother, his birthright would have entitled him to two-thirds of Isaac’s inheritance compared to Jacob’s one-third. But this didn’t matter much to him, apparently. His hunger was more important.

Rebekah may have been standing in the room when this happened. We don’t know. But we can be sure Jacob at least told her about it. Because Esau despised his birthright and (by association) Jewish tradition, Rebekah knew he would not be suitable to carry on God’s covenant.

So, Rebekah did take matters into her own hands, but her dedication to God to ensure His prophecy and covenant remained guarded superseded this, which she readily admits in Genesis 27:13: “Let your curse be on me, my son.”

Later in the book of Malachi, we read that Jacob was indeed the chosen son in the prophecy.

“I have loved you, says the LORD. Yet you say, ‘In what way have You loved us? Was not Esau Jacob’s brother?’ Says the LORD, ‘Yet Jacob I have loved, but Esau I have hated and laid waste his mountains and his heritage for the jackals of the wilderness.’” (Malachi 1:2-3)

Rebekah’s deception sets up Jacob to get Isaac’s blessing, but it also sets up Esau to get his own.

This is the part of the story that I didn’t fully recognize: Isaac blessed both Jacob and Esau, and each blessing was designed specifically for each boy.

Isaac blessed Jacob with the Lord’s covenantal blessing including the one given to Abraham in Genesis 12:1-3:

“Therefore, may God give you of the dew of heaven, of the fatness of the earth, and plenty of grain and wine. Let peoples serve you, and nations bow down to you. Be master over your brethren and let your mother’s sons bow down to you. Cursed be everyone who curses you and blessed be those who bless you!” (Genesis 27:28-29) 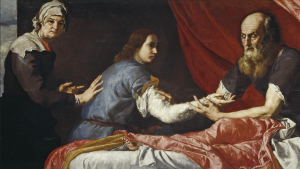 Then, Esau walks in and realizes what has happened. He wants to be blessed too as we saw in verse 38, so Isaac gives him a secondary yet still very meaningful blessing in verses 39 and 40:

“Behold, your dwelling shall be of the fatness of the earth, and the dew of heaven from above. By your sword, you shall live, and you shall serve your brother. And it shall come to pass when you become restless that you shall break his yoke from your neck.”

Seems like an odd blessing, but it does establish the Lord’s prophecy that the older will serve the younger. It also permits Esau to not serve his brother forever, which we see later in chapter 33.

Isaac had intended for Esau to carry on the covenantal line, but he honors his mistake by giving Esau a secondary blessing that cannot undo the first one given to Jacob.

After this scene, Jacob flees his home and goes to live with his Uncle Laban, Rebekah’s brother. There, he falls madly in love with Rachel. He promises his uncle to work for seven years to win her hand in marriage.

Jacob works hard for seven years, but on the wedding day, he realizes his uncle tricked him. Rachel was not the one he finds next to him in bed the next morning. It was her sister Leah. Her older sister Leah.

“And [Jacob] said to Laban, ‘What is this you have done to me? Was it not for Rachel that I served you? Why then have you deceived me?’”

Laban replies, “It must not be done so in our country, to give the younger before the firstborn (Genesis 29:25-26).” You can almost hear the attitude in Laban’s voice, can’t you? “That’s not how we do it. We do it the right way.”

Seems like the shoe is on the other foot now, doesn’t it? Now Jacob is the one being deceived. But, remember Jacob committed two deceptions—one on Esau and one on Isaac. There was more comeuppance to come, which we see when his own sons many years later bring him a blood-soaked coat of many colors and say that his son, Joseph, was killed (Genesis 37:31-35).

Poor Jacob has certainly made a mess for himself. He’s disgraced his family, he’s taken shelter with a guy who’s not all that nice, and now he’s accidentally married the wrong woman. Plus, Esau is still out to kill him. And, the older is certainly not serving the younger. 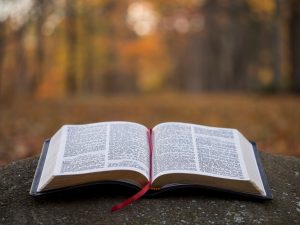 One nice thing about the Bible, there’s always a happy ending somehow. That’s how God works. He’s a God of joy, so He’s not going to leave us hanging.

Next week, we’ll discuss how things turn out for our friend, Jacob, how the prophecy still is fulfilled despite all the twists and turns, and what it all means for us today as followers of Christ. I hope you’ll join me.

See you next week!

In many ways, Isaac’s family is like many families today. How does it mirror yours? What would you have done if you were Rebekah? I’d love to hear your thoughts and opinions about how to handle family matters like this.

For further explanation about why Jacob was chosen over Esau to carry on the covenantal blessing, head over to Bible Tools where John Ritenbaugh offers a very short and clear answer based on Romans 9:10-13.

3 Replies to “Blessing, Deception, and Prophecy: A Study of Jacob and Esau” 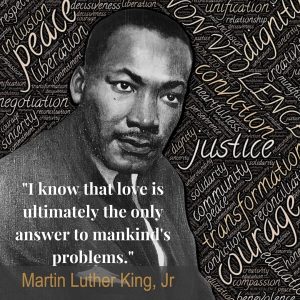 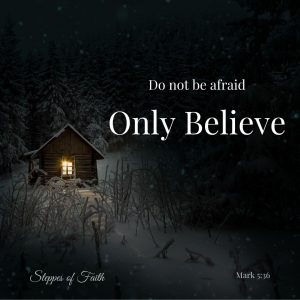 At some point, all Christians feel the need to readdress and reorient to move toward God's calling for their lives. Mark Jobe, president of Moody Bible Institute, has a new book called What Now? It is written for anyone who wants to emerge from stagnation and envision what could be best for their next season of life. You'll learn how to:

Don't let confusion or fear of the unknown keep you from moving toward the fullness of God's plan for your life. Instead, learn to listen to the spiritual whisper directing you to the next stage in your divine calling. Click here to order (not an affiliate link). Only $5.59. 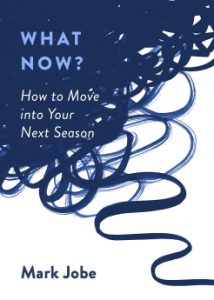